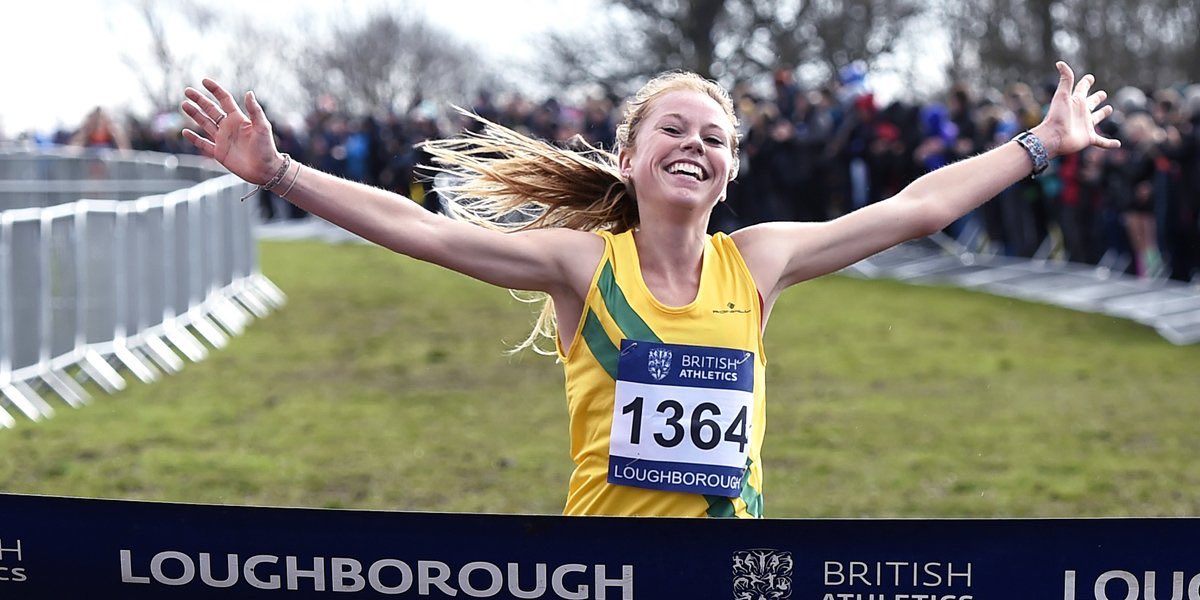 Jenny Nesbitt, after winning the World XC trials in Loughborough, could be racing European XC Champs on home soil .

On the eve of this year’s Cardiff Cross Challenge, Welsh Athletics has announced exciting plans to host the European Cross Country Championships.

With the annual Cardiff event having this week been included on the prestigiousWorld Athletics Cross Country Tour, the sport’s governing body in Wales feels the time is right to bid for a major cross country championship.

Welsh Athletics CEO James Williams told Dai Sport the wheels have been put in motion to prepare a bid to hold the championships here within the next few years – possibly as early as 2024.

“We’ve got this event, the Cardiff Cross Challenge, our aim was always to build it, to create something that people wanted to be part of, and use it as the catalyst to bid for a major championship.

“The one that naturally fits is the European Cross Country Championships. I would definitely like to see Wales host them over the next five or six years.

“2024 has been mentioned or 25, or 26. But it’s definitely our aspiration to bid to host a major athletics event in Wales.”

The European Cross Country Championships would be a huge coup for the nation if Welsh Athletics were successful in their bid.

The event attracts some of the world’s top endurance athletes and huge crowds flock to watch the action.

Recent venues include Belgrade, Toulon and Lisbon, while this December’s event is being hosted by Dublin and next year’s is due to take place in Turin.

Great Britain has a rich tradition in the event, leading the overall medal table which includes team competition successes.

Williams said: “Britain is hugely successful, we‘ve won countless medals over the last number of editions. And Welsh athletes are always front and centre of that success as well.

“I think it is so important that if an event like this did come to Wales, that Welsh athletes are not just competing but challenging the front of the field.

“And that’s what we’ve had over the last few years with European cross country championships. And that’s something which I sincerely hope will benefit any bid by us.”

Welsh Athletics is currently concentrating on the logistics of putting a bid together.

“We’re just working through some of the feasibilities,” said Williams. “We will be attending a series of European Athletics workshops over the next couple of months to look at the minimum requirements of the bid.

“Then we’ll work up a feasibility study with the Welsh Government and hopefully get a city or local authority partner on board as well to work with us on that process.

“We don’t just want to deliver an athletics event, we could do that on our own. What we want to do is deliver a major sporting event for the people of Wales.

“We’d need some cross party support with that from the Welsh Government’s major events unit and a local authority, or city partner on board.

“They would share our aspiration of showcasing what Wales can offer and obviously, meeting the infrastructure requirements of bringing in 600 international athletes fromacross Europe, and everything that goes along with that.”

Williams says they still have an open mind as far as a venue is concerned, despite the Cardiff Cross Challenge, which is staged at Llandaff Fields, having an established reputation boosted by its recent elevation to global status.

“We will start discussions with who we think could be viable partners,” said Williams. “First and foremost we have to look at the course. We’ve got the Cardiff Cross Challenge course which is a ready–made option.

“But we just need to look at whether the additional infrastructure requirements can work within that setting.

“Wales is a country with a lot of natural landscape and the beauty of cross country is you can showcase that landscape, so it’s a good opportunity for us to speak to Welsh Government and speak to local authorities to see where else we can explore in holding this type of event.

“It’s very easy to focus on the day or the two days of activity, but we’re looking at trying to build a legacy around that.

“There’s little point in putting it somewhere where no one can get to. We want thousands of people from across Wales and beyond to come and watch the event if we were successful.

“We also want to use it to be the catalyst for people to be inspired to take up cross country running in the hope to compete in that event sometime in the future.

“As part of any of any bid, front and centre would be the opportunity to create that buzz word – legacy.”

Williams hopes seeing some of the best runners in the world competing on Welsh soil will inspire budding talent closer to home to take up the sport.

“I’m very confident if the event did come to Wales it would bring some of the best runners in the world. That can only benefit the sport in Wales going forward,” he said.

In the meantime, Williams hopes the elevation of the Cardiff Cross Challenge to a Gold Standard World Tour event will start the process of inspiring Welsh runners.

“The fact that Cardiff Cross Challenge is now part of the world cross country tour we hope to attract some of the biggest, best athletes from across the world,” said Williams.

“We’ve joined the tour quite late this year, which along with the pandemic, hasn’t enabled us to bring in the international athletes that we’d have hoped.

“The beauty of the event that we’re delivering on the weekend is that it’s got the Gwent league as part of it – one of the oldest, most prestigious cross country leagues in the UK.

“So you’ll have some of the best athletes from across the UK competing, but at the same time, you will have people who have found running during the last couple of months also taking part

“There’s not many sports you can have the best and those who’ve just started off literally lining up side by side.

“That’s the beauty of it, we can we can showcase everything that’s good about our sport.”

More information about Saturday’s event can be found on the Cardiff Cross Challenge website.