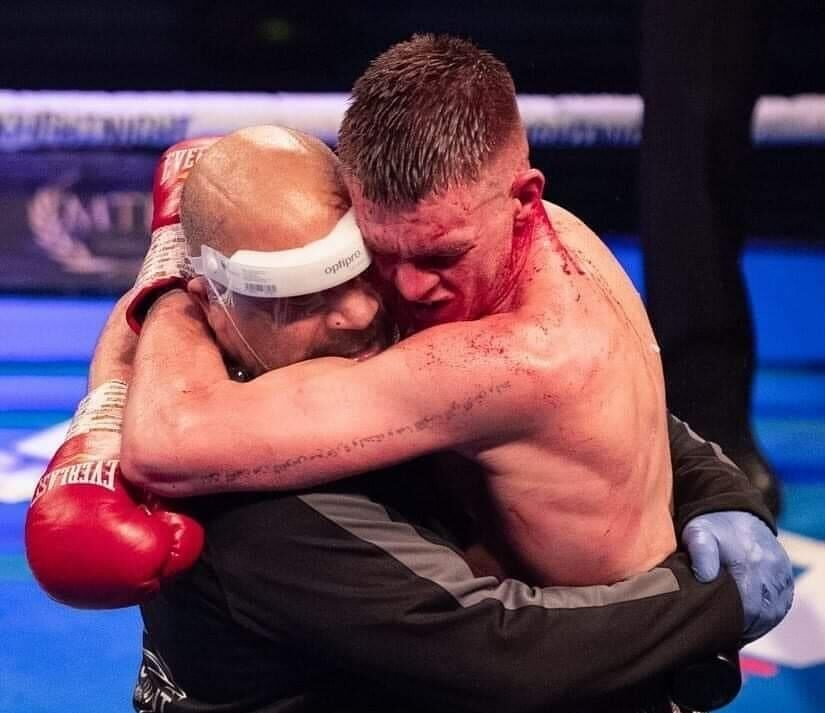 It’s a big weekend for Welsh boxing as Jay Harris fights in Cardiff on Friday night, looking to get another world title shot, and Gavin Gwynne returns to the ring in Swansea. The “Merthyr Mexican” has undergone a significant career switch as he looks to defend his Commonwealth title, as he tells Tom Prosser.

Welsh lightweight Gavin Gwynne has locked away his carpentry bag as he feels he still has all the tools to thrive as a professional boxer.

Until the beginning of the year, the Merthyr Tydfil fighter was combing his sporting career with working on building sites as a carpenter.

But Gwynne is now living his dream as a full-time boxer and will make the first defence of his Commonwealth title against Birmingham’s Jack O’Keefe at Swansea’s LC2 on Saturday, in a fight that is live on S4C.

The 31-year-old credits the support of his sponsors for being able to give complete focus to boxing and is looking forward to showing his fans the benefits of the move.

“Being full-time is going to bring out a different side of my game,” explains Gwynne, nicknamed The Merthyr Mexican due to his all-action fighting style.

“I used to do my boxing training after work and I wasn’t able to be at my best because of it.

“I was a shuttering carpenter and we used to do all the groundworks on building sites, too.

“It was a demanding job. I was always grafting from seven in the morning to three in the afternoon.

“Last time I fought, I knew that if I got the win I would try and get some full-time sponsors to back me to do this all of the time.

“That gave me the hunger to go on and win the title.”

In preparation for Saturday’s fight, Gwynne has been able to spend a lot more time with his trainer, Tony Borg, and he has worked on adding some more tactics to his game.

“I’ve been training twice a day and have put in a lot of work,” adds Gwynne, who has only lost two of his 15 fights as a professional.

“We have had more time to work on things, as before it was all about getting me fit and getting me through the fight.

“Tony and myself have had more time to work on tactical stuff as I’ve been able to do a lot more sparring.

“I couldn’t have done anything more, really, and I’m just busting to get back in that ring. I want to keep on producing these great fights and show-stopping performances.”

Gwynne also can’t wait to fight in front of a crowd again for the first time in two years.

When the pandemic was at its height in August of last year, he had a taste of the big time when he fought in a Matchroom promotion held in the lavish back garden of ring kingmaker, Eddie Hearn.

“It’s a massive moment for myself to defend the title in my home country,” he says.

“When you get your hand lifted at the end, nothing will ever beat that high.” 🥊

“It’s very special to do it with a home crowd behind me.

“I’m buzzing. I’ve got loads of people texting me saying they can’t wait for the fight and it means a lot.

“My fans are always some of the loudest around and I can’t wait to speak to them all after the fight. Some people don’t like the fans going nuts, but it makes me thrive even more.

“When I boxed in Eddie Hearn’s back garden, it was brilliant to say I’ve done that during a lockdown, but it wasn’t the same.

“It was so eerie and quiet- you could literally hear a pin drop.”

Gwynne will be taking on the former Midlands Area champion O’Keefe, who lost his first fight as a professional just under three months ago.

“He’s coming into the lion’s den,” adds a confident Gwynne.

“I’ve done it myself in the past and I think it can bring the best out of you.

“If he goes on to beat me- then his life will change. But I can’t see that if I’m being honest.

“I’ve fought at a much higher level than him, but I’m not taking anything for granted.

“I want to show I’m the best lightweight in Britain and move onto the British title or fight Maxi Hughes for the IBO world title.

“If I come through Saturday unscathed then the big fights will happen for me in 2022.”

The Swansea show also features some of Wales’ best prospects such as Jake Anthony and Joshua John, who are both taking on undefeated opponents, whilst there are also a number of exciting debutants who are looking to make a name for themselves on this stacked bill.

Gwynne says everyone that tunes into S4C won’t be disappointed.

“I’m all about action. I’m always in a war and want to box on the front foot.

“You will see plenty of blood and guts and everyone should tune in to watch me, the Merthyr Mexican, in action.

“It’s going to be a great night of boxing.”

A night of boxing live from Swansea’s LC2 Centre. Home-town fighter Gavin Gwynne tops the bill as he defends his Commonwealth Lightweight title against Jack O’Keefe of Birmingham.