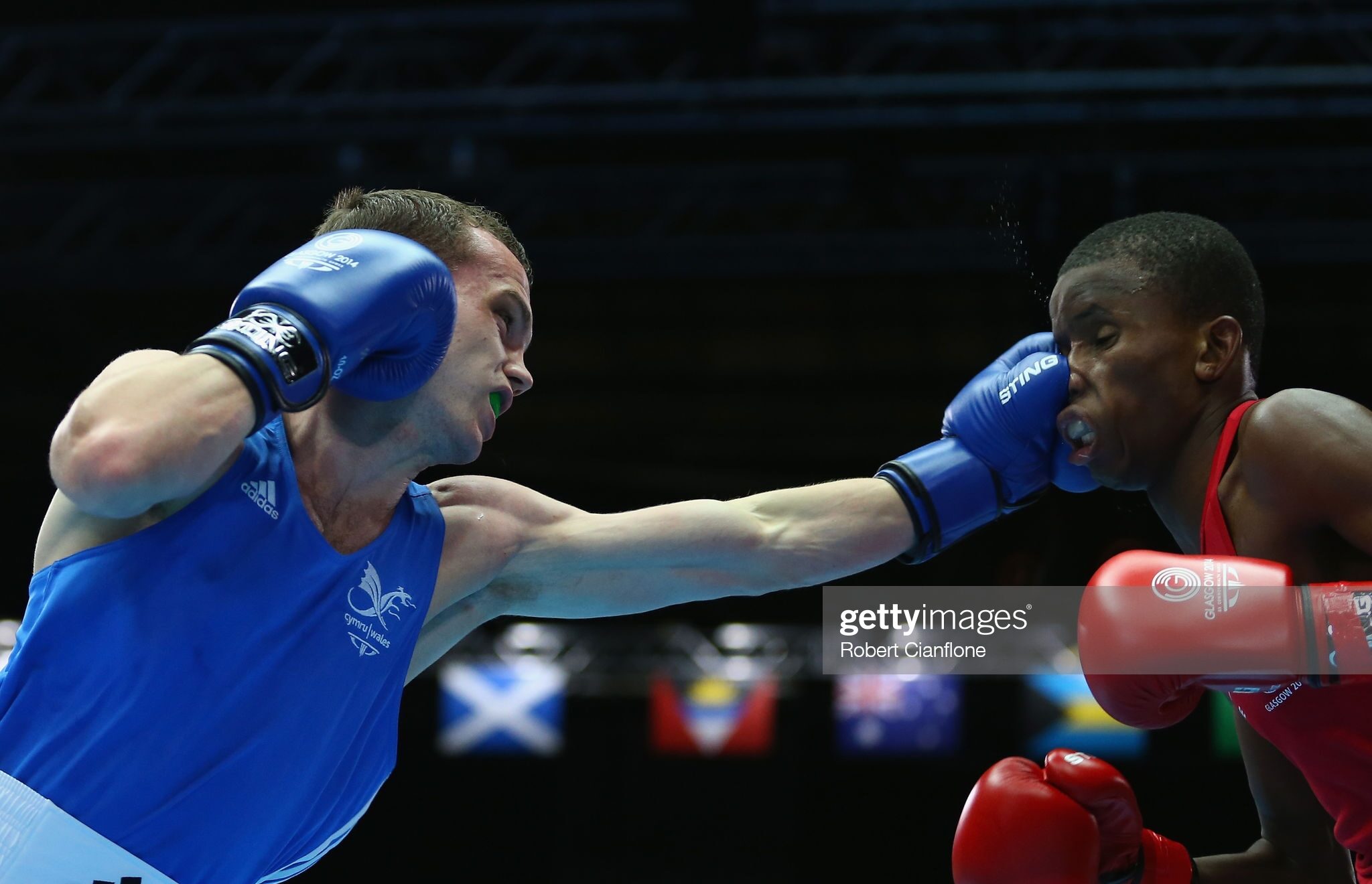 Sean McGoldrick lands a puch on his opponent at the 2014 Commonwealth Games. Pic: Getty Images.

Welsh boxing star Sean McGoldrick is a two-time medal winner at the Commonwealth Games and as the countdown starts to Birmingham 2022 he offers a simple recipe for success, as he tells Tom Prosser.

The next edition of the Commonwealth Games is just eight months away and every Welsh hopeful is searching for the right approach towards peaking next July.

Bantamweight, McGoldrick, won gold in 2010 in Delhi and backed that up with a bronze in Glasgow four years later.

Following in his footsteps, Wales won four medals in boxing at the Gold Coast in 2018. Sammy Lee and Lauren Price both struck gold whilst Rosie Eccles and Mickey McDonagh won silver and bronze respectively.

Next year, Wales will be hoping for even more medals. Likely team members searching for silverware in the ring include brothers Ioan and Garan Croft, Taylor Bevan and the experienced Eccles.

Welsh Olympic star Lauren Price could also look to defend her Commonwealth gold medal if she decides to remain as an amateur.

McGoldrick says the key behind his success lay in a simple but often neglected foundation.

“My biggest advice to anyone going to the Commonwealth Games is to simply enjoy it,” he says.

“How far I’ve come since I started boxing is nothing short of a miracle in my mind.

“I’m usually the type of person to look forward but whenever I do look back, I think some of my proudest moments in boxing have come at the Commonwealth Games.

“People always used to tell me to enjoy it but when you’re looking to win you sometimes forget about that part.

“A few people told me to use my first Commonwealths to get experience and enjoy it but in my head all I wanted to do was win.

“But it’s all about balance. If you have a winning mentality but you also enjoy what you are doing, it will bring you a lot of success.”

McGoldrick, who now boxes professionally under the management of MTK Global, initially won silver in 2010 but was upgraded to gold after his Sri Lankan opponent Manju Wanniarachchi failed a drugs test.

Alongside enjoying the journey, he says every athlete in the Wales squad should try to grow their self-belief.

“At my first Commonwealth Games, I can guarantee no one expected me to medal,” adds the 29-year-old.

“Not that no-one believed in me, but I was by far one of the least experienced on the team.

“If you are a young fighter going to the Games, all that matters is you believe you can go and win.

“It doesn’t matter about the draw. I faced the world bronze medallist and an Olympic silver medallist.

“I met some fighters who were much better than me on paper, but I still beat them so mindset is everything.”

Anyone fighting in a red vest next year will also have another factor in their favour, according to McGoldrick. They will be under the guidance of Welsh national boxing coach Colin Jones.

Jones has worked with some of the biggest names in Welsh boxing such as Price, Joe Cordina and Andrew Selby.

“Without knowing it himself, he’s so inspirational,” explains McGoldrick.

“When Colin says something you listen, his record in boxing speaks for itself. He’s a very clever coach and so psychologically good for the fighter.

“He makes you think a lot about what you are doing. I’ve recently started helping out coaching myself with the Welsh youth team. It’s been great to also watch Colin from a coaching perspective.

“To be a great coach you need to have an impact on people and he certainly does.

“There is no better man to be in charge of Welsh boxing, in my opinion.”

The Newport boxer is now able to look back on his Commonwealth experience as a coming of age.

“You don’t appreciate it in the moment, you appreciate it more when you look back. But it’s definitely some of my proudest moments”

“It’s an honour to be down in Welsh boxing history, but it is just as pleasing from a family point of view, too.

“Hopefully, my future family generations will always talk about what I’ve done in my career and be proud of what I achieved.

“That’s the story that will be passed down.”

18 years old and at my first senior tournament…

I achieved one of the greatest moments of my boxing career 😁#TheJourneyContinues #CommonwealthGames #Delhi2010#Gold pic.twitter.com/01mmDAyu65

Boxing has had a big impact on McGoldrick’s life as a whole and he would urge anyone – budding professional, amateur, or fitness enthusiast – to lace on some gloves and give it a go.

“It’s one of those sports that some people look at and it scares them, or perhaps they are too nervous to go to a gym.

“But, just go your local boxing club and see where the sport takes you.

“All of the top boxers start local and it can definitely open up many new doors for you.”

McGoldrick is now aiming to win titles in the professional ranks but can’t wait to see what the future holds for Welsh amateur boxing.