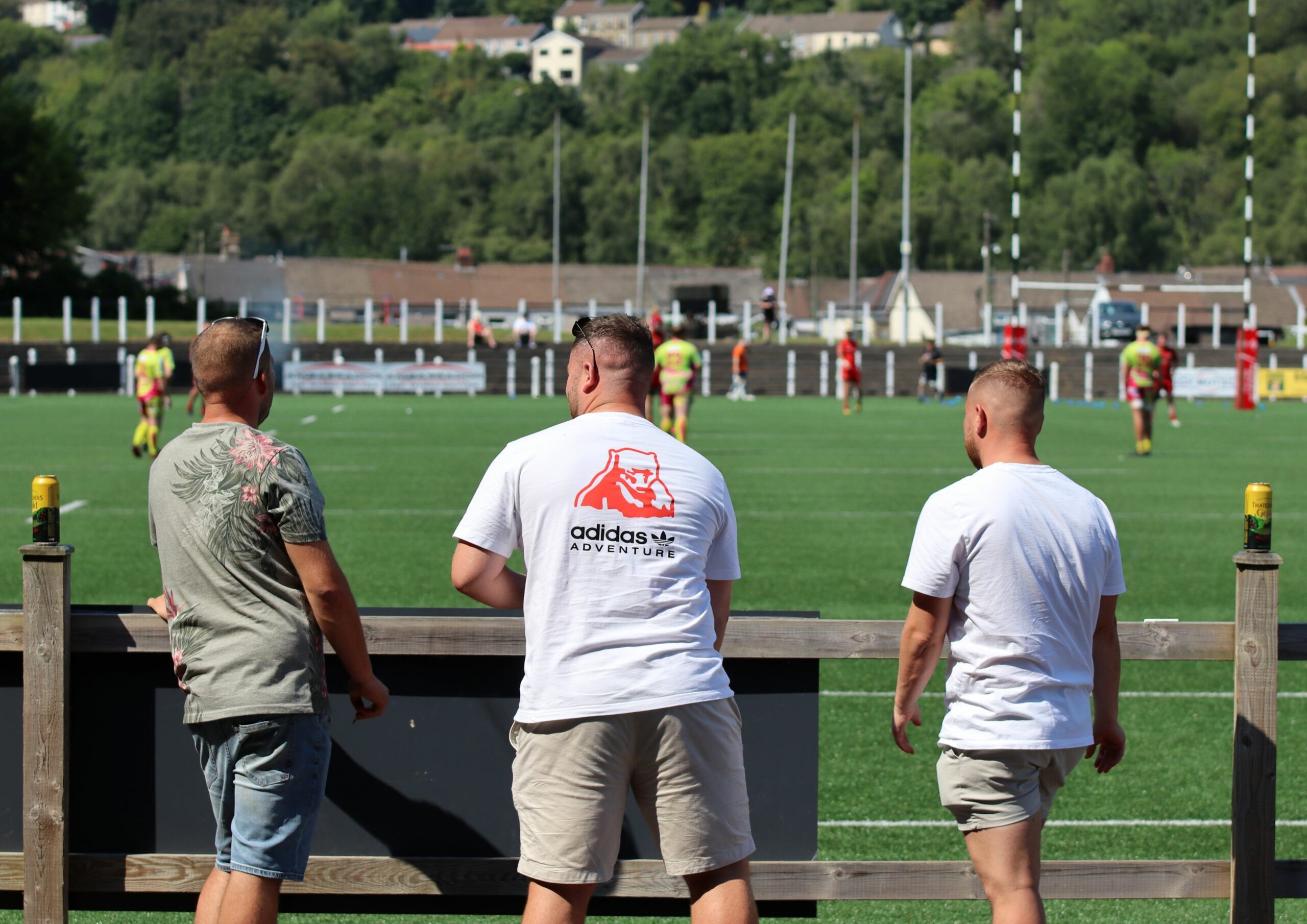 Shades, shorts and possibly a couple of shandies were the order of the day to stay cool in Pontypridd. Pic: Getty Images.

Welsh club rugby is back. The whole chaotic, crazy jamboree returns this weekend in full throttle once more after three years of Covid-affected restrictions. The Indigo Premiership looks healthy, but if it’s real life drama you’re after, then Daniel Parker reckons you need to drop down a notch and take in the vibrancy of the Admiral Welsh Championship.

After months of impassioned – and often acrimonious – debate around the future of domestic rugby in Wales, the spotlight on the semi-professional game could not be more intense.

It’s a good job, then, that the upcoming 2022-23 campaign promises much to hold the attention.

While our underperforming regions bore the lion’s share of criticism last season, the Welsh Premiership also came under fire in some quarters.

At the official launch of the new domestic season in August, WRU Community Director Geraint John made it clear that he wants the Premiership to decisively answer critics of its competitiveness and efficacy as a talent production line.

While the continued lack of a relegation trapdoor means that an element of jeopardy is absent, there’s every indication that the division’s 12 clubs are taking things very seriously indeed.

With that being said, Welsh rugby’s second tier – the rebranded Admiral Championship – could well be where the greatest intrigue lies for neutrals.

The welcome announcement that the top flight is set to be extended from 12 to 14 clubs for the 2023-2024 season means that there is now everything to play for in the Championship: music to the ears of clubs that have been craving a proper promotion battle for years.

After a succession of frustrating near-misses – and some prominent injustices – Pontypool finally have an opportunity to secure their place back at the top table.

Pooler have largely dominated the second tier for a decade now, and are a Premiership club in all but name.

The club’s vociferous support at home and on the road would be an obvious asset to the top flight, as would their talented and settled coaching team.

The late, great Ray Prosser would be proud of the foundations Leighton Jones has built at Pontypool Park in recent years, delivering silverware and an indefatigable feel-good spirit at the Eastern Valley club.

Gareth Betts is the latest addition to the management group at Pontypool RFC.

He will replace the outgoing Rhys Dyer, who has had to step away due to injury problems.

Jones’ strong backroom team has been bolstered over the summer with the addition of Gwent native Shaun Connor, the former Ospreys and Dragons outside-half, who has earned his coaching stripes at the Dragons Academy.

Another former Dragon who could make a big impact on the field is scrum-half Dan Babos, a former Wales Under-20 international with a point to prove.

Pooler’s pre-season results – a crushing 69-21 win over Dings Crusaders and a victory over Premiership outfit Llandovery – suggest they will mean business this season.

Neath are another sleeping giant looking to return to the top tier after a decade characterised by instability.

The Welsh All Blacks capped off a productive pre-season schedule with a 33-33 draw against old rivals Swansea last weekend.

That West Glam derby thriller – coupled with a very competitive display against potential Premiership title contenders Ebbw Vale earlier in August – suggests Neath will be a force to be reckoned with again this term, having narrowly missed out on the Championship title last year.

Players to look out for at The Gnoll this year include impressive No.8 David Griggs and Resolven-raised utility back Lewis Evans,

Whilst the Bulls’ title victory last term had a pyrrhic feel without the ultimate prize of promotion at stake, they were thoroughly deserving league winners, losing only one game all season.

The Rhymney Valley club lost influential centre Jordan Howells to Pontypridd over the summer, but should still be ready to mix it with some of the division’s better-resourced clubs.

Other former Premiership clubs who will be hoping to push for promotion include Cross Keys.

Keys – whose picturesque Pandy Park home ground has been used as an international rugby league venue for Wales Women this summer – have endured a challenging rebuild since being relegated from the top flight in 2019; a process not helped by the disruption of the pandemic.

Welcome back Jack, looking forward to the season 🔑@jackcondy8 https://t.co/0HuYZk5vSb

There will be increased pressure on coach Morgan Stoddart (who also coaches the Polish national side) to make the Gwent Valleys outfit more competitive this year.

The former Wales full-back will be joined in the dugout by new forwards coach Jack Condy, a former Keys player and Development Academy Coach at the Dragons.

On the theme of development, Stoddart will have half an eye on bringing younger players forward into first team action this term; although there will still be an important role to play in the back-row for talismanic skipper Tom Lampard, who turns 38 this October.

On the other side of Machen Mountain, Bedwas can fancy themselves as dark horses.

The Bridge Field outfit – who until recent years matched Newport and Cross Keys in the development of regional players for the Dragons – went under the radar to finish fourth in the league last year.

Bedwas also reached the final of the Premiership Plate, where they suffered a last-gasp defeat to Trebanos.

Stefan Sankala’s side have appointed versatile hooker Dale Rogers, a local boy, as their captain for the new campaign.

The standard bearers for West Wales in the Championship are Narberth, who were quietly impressive en route to a fifth-placed finish last term.

The Otters have endured something of a tumultuous summer, characterised by wholesale changes to their playing squad and a bitter ongoing dispute with Pembrokeshire District and Rugby Union over their participation in the Pembrokeshire Cup.

They begin their campaign against Ystrad Rhondda on Saturday.

Ystrad have been solidly competitive since their promotion to this level in 2018, and should continue in the same vein under the captaincy of utility clubman Liam ‘Scooby’ Wiggins.

Maesteg Harlequins, who have in recent years displaced local rivals Maesteg RFC as the dominant force in the Llynfi Valley, will also be looking to break free from the mid-table pack this year.

The Championship is back!! pic.twitter.com/MCPBV6MVsE

The same is true for the ambitious Cardiff Met and Trebanos, who will be hoping to build a foundation on the back of their Plate triumph at the Principality Stadium in April.

Expectations will be lower at Glamorgan Wanderers, who start the new campaign with an entirely new coaching team, and may find themselves in a basement battle with Tata Steel, Ystalyfera and Beddau; a troika of clubs which managed only a solitary win apiece last term.

The most memorable moment of Beddau’s campaign came in the form of a public spat with Pontypool, who called on the WRU to expel The Green and Gold from the division over their failure to complete fixtures which could have proved decisive in the title race.

There’ll be plenty of spice – but perhaps little in the way of festive cheer – when the two sides renew acquaintances on December 17th.

All in all, the Championship looks set to be the place to be for Welsh club rugby drama this season.

Opening round of fixtures (all Saturday 3rd September, KO 2.30pm)