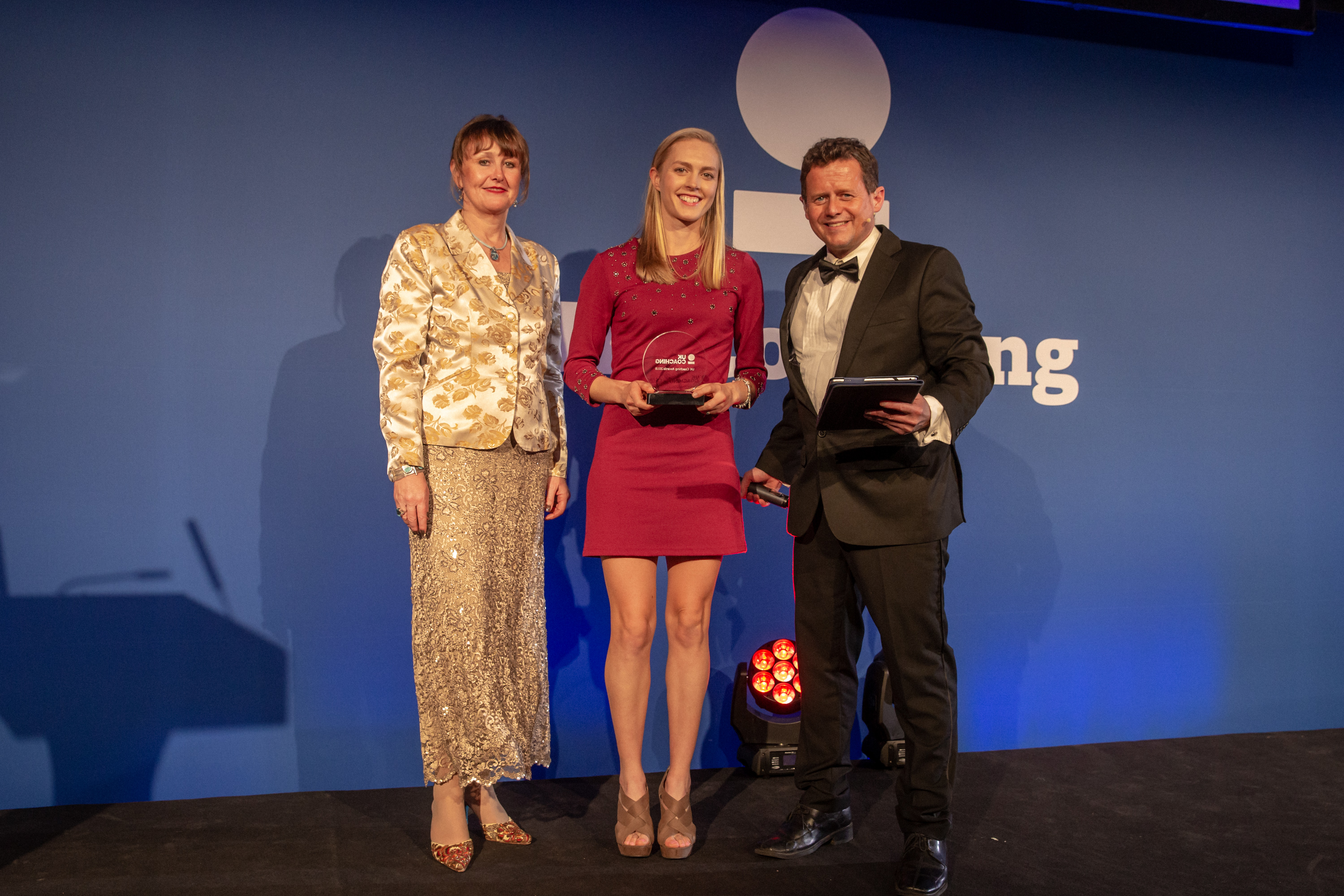 Swansea’s Francesca Lewis was recognised for her work in tennis with Aberystwyth’s Lee Coulson BEM work in basketball and disability sport also recognised.

Also, after an outstanding year for Welsh cyclist Geraint Thomas in which he won the Tour de France, his coaches were named as winners in The Coaching Chaincategory.

Maindy Flyers’ Head Coach and Founder Debbie Wharton and Welsh Cycling’s Head Coach Darren Tudor were named alongside Team Sky’s Tim Kerrison, Matt Parker and Rod Ellingworth for the contribution they have made throughout Geraint’s life.

The showpiece UK Coaching awards annual event, which is seen as one of the most prestigious by the coaching community, took place at The Honourable Artillery Company, London on Thursday.

Wharton, who has seen Thomas develop from a youngster to Wales’ first Tour winner, said: “It’s a real honour, we are really proud and can’t believe it’s happened. It makes it all worthwhile.

“Myself, my proudest moment has been watching his career unfold over time and watching his progress from that 9-year-old boy coming on leaps and bounds.”

Lewis has been responsible for bringing through a huge number of players from entry level into the local academy programmes, with her players winning five national singles titles.

She is also recognised for delivering individual coaching packages and inspiring participants to achieve their goals. She works with parents and players, on-and-off the court, supporting her players at tournaments and looking after their physical and mental development.

Her achievements were also instrumental in Swansea Tennis Centre being awarded both Regional and Local Player Development Centres in the LTA’s new High-Performance Strategy, which will provide even greater opportunities for children in the region to receive high-performance coaching.

What’s more, she has set up a foundation through which she raises in excess of £10,000 annually to help support players at regional level or above to train and compete.

Lewis, after receiving her award, said: “To win at the UK Coaching Awards is the greatest honour for any coach – and I can’t believe I have managed to win this award against such incredible competition in this category.

“I am still a young coach with many years of coaching ahead of me, so to be recognised at this stage in my career gives me a huge boost.”

Lee Coulson BEM has been named as Community Coach of the Year, recognising his great coaching achievements in 2018, following a 26-year stint coaching basketball and 15 years coaching disability sport.

The Aberystwyth coach is helping to raise the profile of disability sport in Wales exponentially.

As a Disability Sport Wales national performance pathway coach, many of his participants have won international gold medals and this success has enabled Coulson to grow the performance pathway. Even more children and young people can now take part in, and excel at, disability sport.

Multi-sport coach Coulson said: “It’s crucial that everyone gets the chance to participate in sport – no matter if they are disabled or not. This is what I am trying to help people recognise across Wales. Great coaching ensures that sport is accessible for all.

“After coaching for 26 years, it’s a huge honour to have been recognised at the UK Coaching Awards. Here’s to the next 26 years.”

Emma Atkins, Director of Coaching at UK Coaching said: “The UK Coaching Awards is a way for the nation to praise the great coaching that takes place, and a chance for us in the coaching sector to reflect and celebrate the effect great coaching has on society.

“We are privileged to be able to recognise more great coaching again, especially, in a year where we’ve worked hard to help the public understand what great coaching looks like following the launch of the first ever Coaching Week.

“I am also thrilled to see that more women coaches were recognised for their great coaching expertise, which is testament to the hard work and dedication of many partners who work tirelessly to ensure we create a culture in the coaching sector where everyone can thrive.

“I would like to congratulate all of this year’s winners – as well as the finalists – for their incredible achievements and for benefiting the lives of so many. Well done”

Also on the night, the head coaches of GB’s gold medallists from the PyeongChang 2018 Winter Olympic and Paralympic Games were inducted into UK Coaching’s hall of fame.

The winners of the 2018 UK Coaching Awards are:

The following categories have been awarded to coaches:

Children’s Coach of the Year – supported by sportscotland

Community Coach of the Year – supported by Sport England

Disability Coach of the Year

High Performance Coach of the Year

As you can see from the photo slightly overwhelming and very unexpected. Thanks to everyone for your kind words & support #UKCoaching #TalentDevelopment pic.twitter.com/qzcJB9Qa9o

Talent Development Coach of the Year

Awards in support of coaches

The following categories have been awarded in support of coaches:

Coach Developer of the Year

Coaching Culture Organisation of the Year

Coaching for an Active Life Award

Great Coaching Moment of the Year

UK Coaching is the brand name of the National Coaching Foundation. Great coaching encourages people to be more active and lead healthier lifestyles and our mission is to put coaching at the heart of physical activity and sport.

Coaching is in our DNA. For more than 30 years, alongside our partners, we have provided the coaching workforce with the skills and knowledge they need to make a positive difference. We’ve also supported our partners to do the same.

We’re now widening our scope to do this on a broader scale. How? By adopting a wider definition of coaching and extending our reach into new markets where great coaching makes a difference every day.