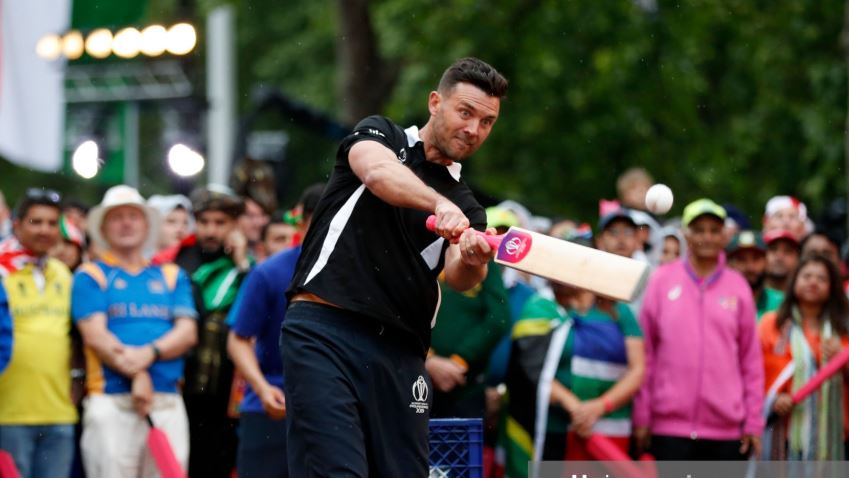 James Franklin of New Zealand bats during the ICC Cricket World Cup 2019 Opening Party at The Mall on May 29, 2019 in London. Pic: Getty Images.

The Cricket World Cup takes its bow in Wales tomorrow (Saturday), when New Zealand and Sri Lanka meet at Cardiff’s Sophia Gardens. Graham Thomas reports on how Cricket Wales have tried to ride the wave and get more youngsters involved in a sport that is heading towards changing times.

The Cricket World Cup is heading to Wales and the first delivery has fans in the middle of the action.

The global tournament began on Thursday and runs until July 14, with four matches taking place in Cardiff at Glamorgan’s face-lifted and spring-cleaned Sophia Gardens.

It means a chance for cricket fans to see the world’s best players in action, but also provides an opportunity for both Cricket Wales and Glamorgan – Wales’ only fully professional, first-class county side – to get more people hooked on the sport.

A trophy tour has already passed through Wales, but today (Friday) there is a chance for everyone in Wales – young and old – to lend a hand, literally, on the eve of the first Cardiff game between New Zealand and Sri Lanka.

Dubbed “The Ultimate Delivery” there will be a relay of catchers – a kind of chain gang of fielders – stretching across Cardiff. They will be throwing the official match ball along the human link, around the city and into Sophia Gardens stadium itself.

Mark Frost, community and development manager at Cricket Wales, says: “The ambition is to have thousands and thousands of people involved and to get people enthused and excited about cricket.

“The match ball is coming down early on the train on the Friday into Cardiff Central. The idea is then to form a catch relay.

“A line is going to be formed going through the city to the river. The ball will go on to a boat to Cardiff Bay, through the middle of the Urdd Eisteddfod and then onto a rickshaw, back into town and along the arcades, up to Cardiff Castle, off the turrets, through the park, where Glamorgan players will throw it across the Taff – hopefully, without dropping it – then around the back of Sport Wales and into the ground where the teams will be training for the following day.”

Anyone who fancies giving this a fling, can get involved via this link: https://www.universe.com/events/the-ultimate-delivery-y-tafliad-mawr-tickets-cardiff-KJ7P09

There’s already been plenty of interest in the Cricket World Cup generated by the trophy tour which spent five days in Wales and was carried to all corners.

It began on May 5, when the trophy glistened in the sunlight on the lawns of the Sport Wales building, nextdoor to Sophia Gardens, where England were taking on Pakistan in a T20 international.

Around 3,000 fans strolled up to have their picture taken alongside it, before the trophy was whisked off to Abercynon on the Monday and the All Stars Centre. For those not in the know, All Stars cricket is the UK-wide programme aimed at getting five to eight-year-olds smitten with cricket from their very first bash.

The efforts to use the Cricket World Cup to engage, enthuse and excite people about cricket in Wales haven’t ended there, either.

All Stars cricket tournaments throughout the country have been World Cup-themed, and over 100 cricket clubs in Wales signed up for £1,000 grants aimed at improving clubhouse facilities.

“Those grants have been very positive,” says Frost. “It was geared up to making the areas more family-friendly and more welcoming, so they could watch the Cricket World Cup this summer after they had had a game.”

A total of 500 tickets were given away to All Stars Centres for that England-Pakistan game, and 3,000 more tickets are being given away to schoolchildren for the World Cup tie between Afghanistan and Sri Lanka on June 4, which just happens to be a school day.

Frost adds: “We know that will be a great experience for the children and when we have done things like that in the past it transforms the atmosphere in the ground. It also changes the decibel level!

On May 31, the day before that first tournament game in Cardiff, as well as The Ultimate Delivery, there will be a celebration of the tournament in Pontcanna Fields, just behind Sophia Gardens stadium.

The big question is, can all these events – as well as the Cricket World Cup itself – inspire Welsh youngsters, boys and girls, to pick up a bat and ball and in what number?

From previous varied events such as the Ryder Cup golf coming to Wales in 2010, through to the 2012 London Olympics as well as the 2017 Champions League football final in Cardiff, the whole notion of impact and lasting legacy can be difficult to quantify.

Were more budding Welsh golfers inspired by Jamie Donaldson, Rory McIlroy and Co. eight years ago? Are there more Welsh girls vowed into action by Jessica Ennis? Has Gareth Bale’s Real Madrid visit two years ago made any difference? It can be hard to know.

The question is doubly important for cricket as the sport is going through so many seismic changes, which Welsh cricket and Glamorgan have to grapple with.

With the new tournament, The Hundred, on the horizon, including a Cardiff-based franchise, Frost insists the current indications of impact trickling down to youngsters and the grass roots is encouraging.

“We measure the impact by looking at the numbers of children involved in club cricket. The All Stars programme, for five, six and seven year-olds, started in 2017.

“And one of the really encouraging points is that because we are aiming to make it gender neutral, we have had a 23 per cent take up from girls which is significant.

“We all hope that England are successful in the World Cup and we can continue the momentum into the T20 this season.

“And, we also need to try and get a young Welsh cricketer into that England team, which we haven’t had for a while.”

It all adds up to a vibrant summer for a sport aiming to maintain its status as a true big hitter.