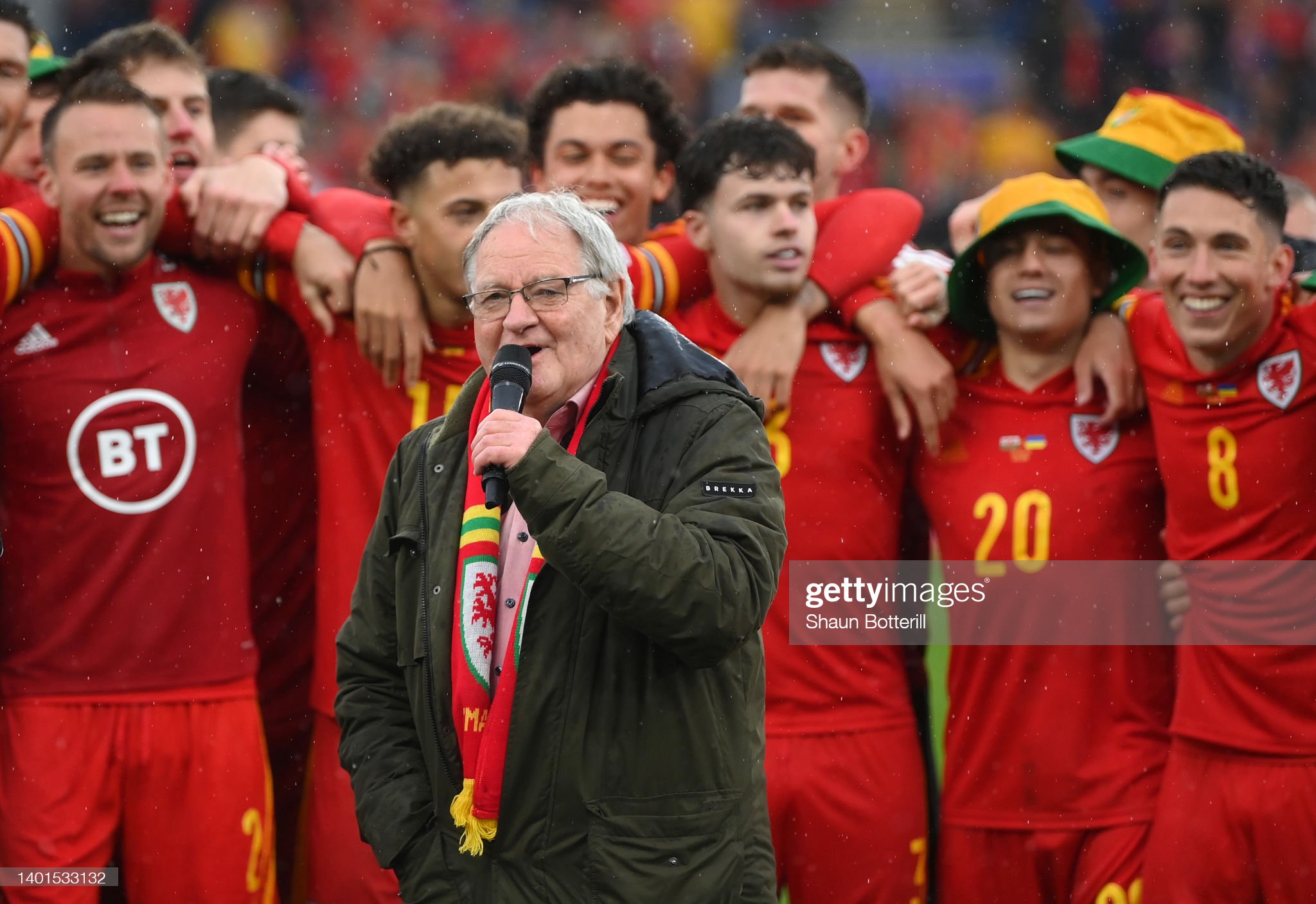 Welsh football is finally breaking free of the shackles and emerging from the shadow of Welsh Rugby.
The UEFA survey all but confirms that football is taking centre stage in Wales’ sporting theatre, with the recent result against Ukraine and the incredible atmosphere on Sunday night emphasising football’s new standing in the country.
The FAW has made significant strides in recent years, but qualification to the World Cup in Qatar, Wales’ first World Cup since 1958, has sent them into a new stratosphere.

The 64-year long wait for a seat at the game’s top table finally came to an end at a passion packed Cardiff City Stadium last Sunday against the Republic of Ireland’s opponents tonight. Did anyone really give Wales a chance of repeating the heroics of John Charles, Ivor Allchurch, Jack Kelsey and Cliff Jones?

There weren’t many outside the Principality, especially after the 3-1 drubbing the Ukrainians had handed out to Scotland. Sure, Rob Page’s team rode their luck, had their goalkeeper, Wayne Hennessy, to thank as much as Gareth Bale, but this was no fluke.

Meticulous planning has been going into Welsh football from the top down for more than a decade and the fruits have been two trips to the Euros, where they reached the semi-final in 2016, and now the Holy Grail, the World Cup in Qatar.

Current manager, Page, won 42 caps for his country and openly admits he was part of a team dubbed ‘Rag Tag Rovers’ for the way they prepared. They once went to a prison to train because it had arguably the best pitch in the country.

They moved from hotel to hotel, had no designated training facility and were a pretty disparate bunch. And half the time Alex Ferguson discouraged Ryan Giggs from turning up.

Managers came and went, some returning more than once – Mike Smith and John Toshack – and then there were the heartaches. The Joe Jordan handball that turned into a penalty against Wales against Scotland at Anfield in 1977, the harsh penalty given against Wales in Cardiff against the Scots in 1985 and then the Paul Bodin penalty miss against Romania in the Welsh capital in 1993 had all contrived to keep the Welsh away from the top table of football.

How times have changed. A golden generation of players, led by Bale and Aaron Ramsey and including Joe Allen and Hennessey, have come through the ranks and grown into outstanding international performers.

Just as Jack Charlton inspired Ireland’s golden generation to reach two World Cups and one European Championship, so it was Gary Speed who launched a revolution in the mindset, playing style and attitude in the Welsh camp when he became the Wales manager in 2010.

“Gary Speed started it all 12-13 years ago and I dedicated the win over Ukraine and World Cup qualification to him and his family. He changed the culture, the mentality and the professionalism and took it to another level,” said Page.

The man who started this. Never forget pic.twitter.com/PrYcj2hBgv

“The professionalism, how we approach games, how we have an identity as a nation and as a team – Gary built the foundations and we have added little bits ever since. Without the foundations he put in we 100% wouldn’t be here today.

“It is not just about building a culture. The biggest change for me has been the connection we now have with the supporters – that has been massive and they were right behind us from the first minute to the 96th on Sunday.

“That helps the players, but winning games is also important. You can build a culture and do all that, have team spirit and camaraderie, but if you aren’t winning games the fans won’t be happy.”

This could have been the greatest off-the-field moment in Ryan Giggs’ football career, but it has fallen to Page in difficult circumstances to deliver what Football Association of Wales CEO – Limerick native, Noel Mooney – reckons will be a £10m windfall for the game by qualifying for Qatar.

Significantly, a large amount of that money will be ploughed into the grassroots. The FAW appear hell-bent on knocking rugby union off its self-appointed perch as the ‘National Sport’ of Wales and they are doing a great job at the moment.

They have built bespoke training bases at Newport and in Wrexham for their age grade sides to benefit from, they took over the old Cardiff Blues training centre at the Vale of Glamorgan Resort and upgraded it to Premier League standards.

"We're all in this together." @Cymru manager Rob Page, CEO Noel Mooney and the squad thank the FAW Staff, Council and Board for all their hard work behind the scenes.

“We’ve had to evolve and standards and facilities have changed. The players want for nothing and we have to give them the same standards as the best teams, like Real Madrid, Juventus, Liverpool, Manchester City and Arsenal.

“If we want the best players to continue to play for us that’s what we’ve got to give them. It means then there can be no excuses. It is more like a club environment now.”

The FAW have also spent much of the recent past cosying up to Uefa to their mutual benefit. Waes has hosted the Champions League final in 2017, Uefa Super Cup in 2014 and began with the Uefa Women’s U19 Championship Final Tournament in 2013.

More importantly to the advancement of the game in Wales, many of the coaches at the JD Cymru Premier League clubs have been on the same courses. Teams in the top three tiers of the domestic game have to conform to strict standards in terms of coaching and in establishing academies.

Football has always won the battle on playing numbers with Welsh rugby but it is now winning the cultural war. Welsh nationalist Dafydd Iwan’s stirring song, ‘Yma o Hyd’ (Still Here), may have been written during the dark days of Thatcherism, but it has become the unofficial anthem for Welsh football fans.

The financial power of the game is such that the Welsh football captain, Bale, has been earning almost as much in a week over the past nine years at Real Madrid (£600,000) as the current rugby captain, Dan Biggar, makes in a year.

That connection between the team and the fans has been vital. Page has toured the country meeting schoolchildren and supporters and the bond that has been built seems unbreakable at the moment.

Culture, standards, professionalism, allied to a winning team, have taken the round ball game to the top of the charts. There is much for other nations who won’t be in Qatar to learn from the new approach.