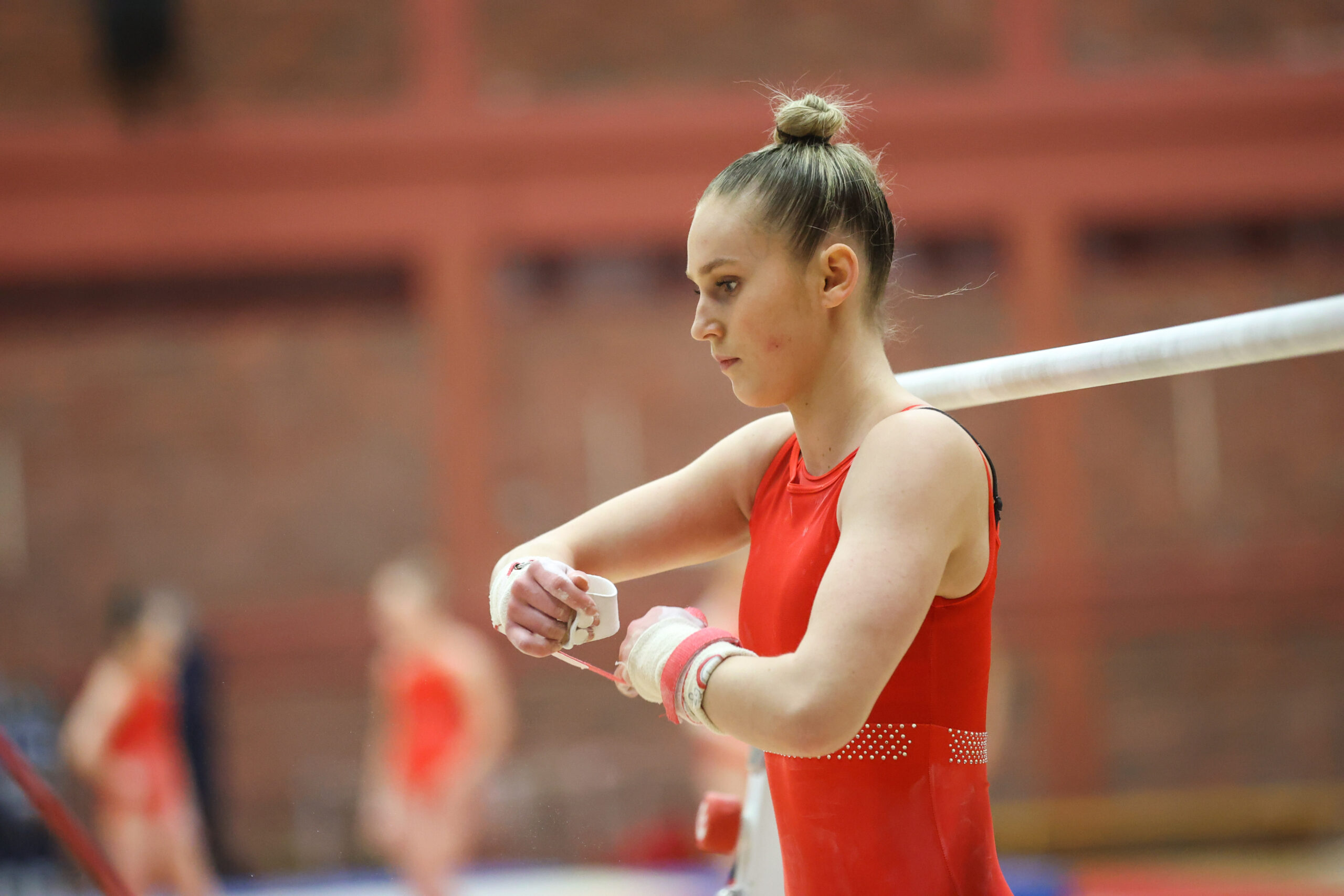 Evie Flage-Donovan won gold on beam at the 2022 Artistic British Championships at the M&S Bank Arena in Liverpool. Sport Wales.

It has been quite some month for junior women’s artistic gymnast Evie Flage-Donovan.

The 15-year-old rising star from Newport bagged herself a stunning gold medal on beam at the 2022 Artistic British Championships at the M&S Bank Arena in Liverpool at the end of March, having finished sixth in the junior all-around competition.

That performance has earned her selection to the Great Britain junior squad for the first time.

Evie, who attends Lliswerry High School, was one of eight Clwb Cymru Caerdydd gymnasts who train at Sport Wales National Centre under the guidance of the national coaches to make British squad.

But, like all gymnasts, her journey began many years earlier at a local gymnastics club where community coaches play a key role in helping develop those gymnasts.

What a fabulous weekend it has been for our Clwb Cymru Caerdyd junior women’s trio Evie Flage-Donovan, Meliyah Baker and Ruby Evans.

Capped off today by a stunning GOLD for Evie on beam, GOLD for Ruby on uneven bars and SILVER for Ruby on vault 👏#2022British pic.twitter.com/My84mNy92H

And this week Joanne Paginton – Evie’s first coach at her first club, Newport Girls Gymnastic Club, has been speaking about her time coaching Evie.

Newport Girls was where Evie spent her first few years before moving to Cardiff Central Youth Club (CCYC) to further her journey towards the national centre.

“My memory of Evie, every session walking through those double doors, this little petite girl with a massive smile on her face carrying her little blue gym bag running up to me to give me a hug because she just loved gym,” recalled Paginton.

“Straight away I never knew a child with so much dedication in what she did; not just in gymnastics, ballet, or school – everything.

“The commitment of a child to get it right at such a young age made me as a coach want more out of her, so she was so easy to coach. When you have parents’ backing her like Donna and Nick you knew this was going one way.

“The passion for a win was in her. Courageous and totally fearless on vault, she didn’t care. She knew she was getting over; she would run as fast as she could hit that marker I placed and got over.

“Beautiful on floor and how she committed to every move, her presentation was lovely.

“Strength on bars always and conditioning to get ahead.

“The beam, she enjoyed it so much. She always worked hard on her elements, we would spend so much time on presentation, vision and body awareness.

“It was so natural for her, I taught her how to show off her neck, she was so confident it would be lovely to watch this little dot walking and jumping so high without a wobble.

“Evie was not scared to show off her balance, and her elegance, so for her to win gold on beam is not a surprise.”

The decision to move then eight-year-old Evie from Newport Girls to CCYC was an easy decision as much as it was a tough one.

“I knew a decision would have to be made,” explained Paginton. “I had to let her go, we just didn’t have the hours to give her as we knew she was destined to achieve.

“We would never hold a child back when you know there’s something special in her.

”So when she was eight, we went to visit Cardiff Central where I attended some training sessions with Stacey Hooper to complete the transition to a different club. This was the next part of her journey.”

What a journey it has been since and, under the guidance of the national coaches, has gone on to achieve much – with the sky the limit for Evie.

That said, Evie is unlikely to ever forget where it all started and the club that set her on her way are certainly very proud of her.

Paginton continued: “It’s always amazing when a child achieves what they’ve been working for.

“There aren’t many leisure centre based clubs left, so when you have a gymnast like Evie that reaches a level that kids dream about, of course the club would be proud knowing Evie started as a youngfour-year-old at Newport Girls Gymnastic Club.

“The club has had some amazing coaches over the years who have always given their free time and effort to get the best out of the children.

“I would like to think that every coach has left an imprint. I know Head Coach, Iain Hunt, would always complement Evie, she would take that on board coming from him so considering how little hours were available for her.

“She always kept up with bigger clubs, so when something massive like Evie being selected for the Junior Squad by British Gymnastics – and it all started in Newport Girls Gymnastic Club – it’s definitely a proud moment for us at Newport knowing as coaches it can pay off.”

And now Newport Girls Gymnastic Club will certainly be following Evie’s journey towards the senior ranks.

“Seeing her achieve at this level in something she has trained for so many years it’s amazing,” Paginton added.

“She has always held herself well with the highest standards. When we’ve caught up over the years, her passion and ability to inspire other gymnasts is a natural gift.

“It’s going to be a joy to watch her mature into a great gymnast.

“I wish her all the best in just getting better and seeing what the next journey brings.”