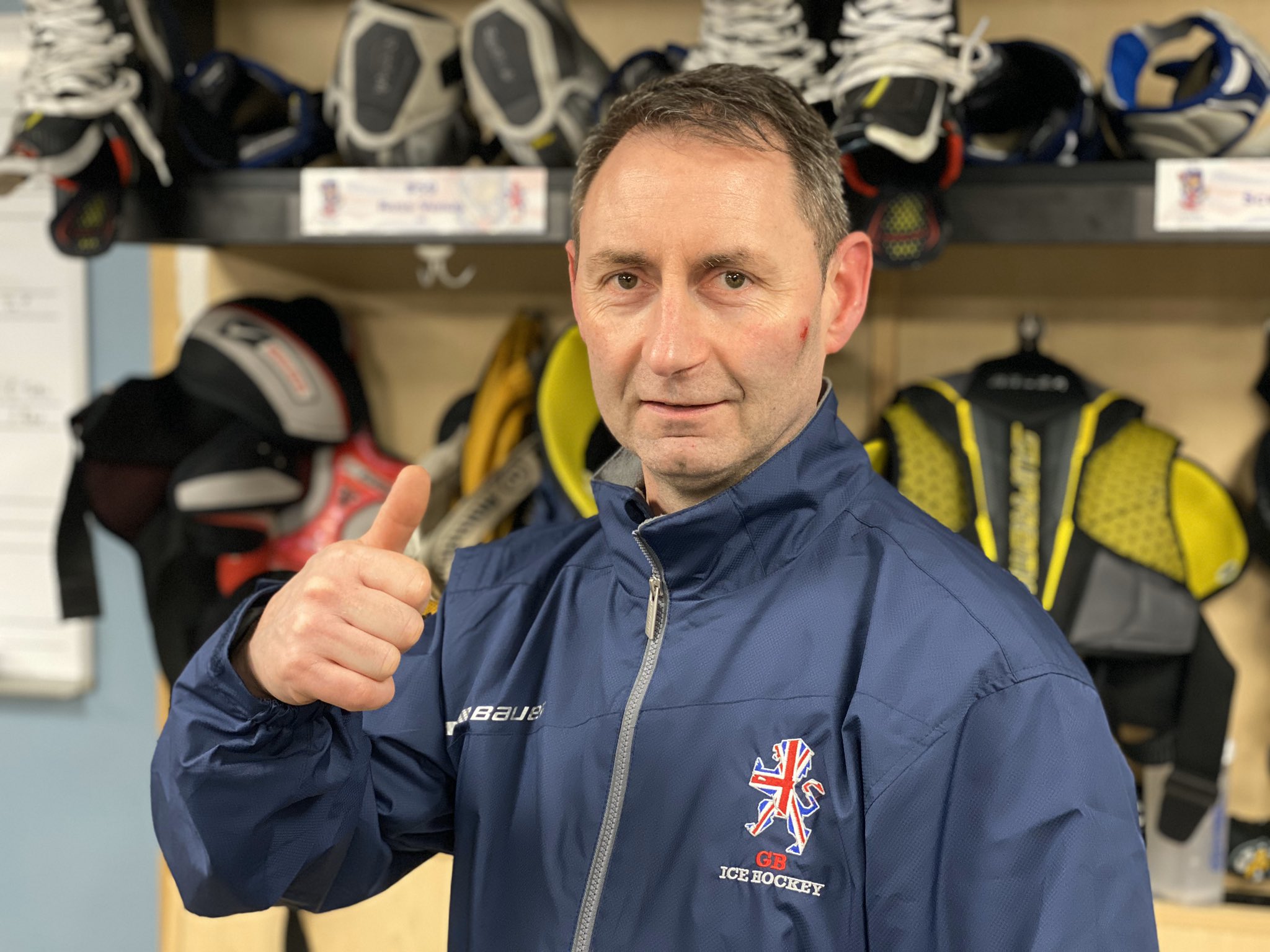 Welshman Jason 'Taffy' Ellery shows he is okay after being struck by a puck during Great Britain's win against Romania.

There has been pain and pleasure for Welshmen during the Olympic ice hockey qualifying tournament in Nottingham.

Great Britain kit manager Jason ‘Taffy’ Ellery suffered when he was hit in the face by a puck during the 4-3 win against Romania, while Cardiff Devils’ Matthew Myers scored for GB from a chance created by Ben Davies, a Cardiff-born forward who now plays for Guildford Flames.

Thankfully, Welshman Ellery overcame the shock of being struck and was able to carry on with his duties despite being left with a bruised face.

Myers scored GB’s third goal and said: “It came from good play by my line-mates. V [Ross Venus] went to the net and took a D-man with him, while Ben [Davies] had his head up and played a nice pass to me.

“I slid it between the goalies legs. He came out hard to challenge, but thankfully I managed to finish it off.”

GB play Estonia in their second qualifying fixture at Nottingham’s Motorpoint Arena this evening and Myers said: “We have to learn from, mistakes.

“Romania came out hard, took the game to us, had possession and O-zone time in patches.

“It was a one-goal game and we have to learn from mistakes.”

Slovakian-born netminder Patrik Polc plays for Romania and was man of the match, making a series of massive saves.

“Their goalie [Polc] was insane,” said head coach Peter Russell. “He made the game what it was. The guys were positive, stuck at it. Our forecheck was great, we turned a lot of pucks over and defensively we were pretty good. We kept them to the outside.

“I was pleased to win the first game against what is an extremely good team.

“They are one division below the top flight now and improving all the time.

“We played with pace and good tempo. We tried a few things that didn’t come off, but overall it was a good performance.”

“We needed a regulation time win and that’s what the guys did,” said Bowns. “We knew what Romania would bring. They are fast, counter-attack a lot, stick everything to the net and get bodies to the net.”

There are four teams in GB’s qualifying group and the winners will go through to the next stage in the quest to qualify for the 2022 Winter Olympics in Beijing.

Hosts Britain are favourites to go into the final qualifying tournament during. GB play at the highest level of the World Championships, retaining their place last time out with a dramatic last-game victory against France in Kosice, Slovakia.

Russell has a full 22-man squad to select from with Robert Farmer set to win his 50th GB cap.

In today’s other game, Hungary, who beat Estonia 4-1 in their first game, play Romania (2pm).

Elite League teams are on a break while the Olympic qualifying games and played. The next fixture for Cardiff Devils is against Coventry Blaze on Saturday, February 15.