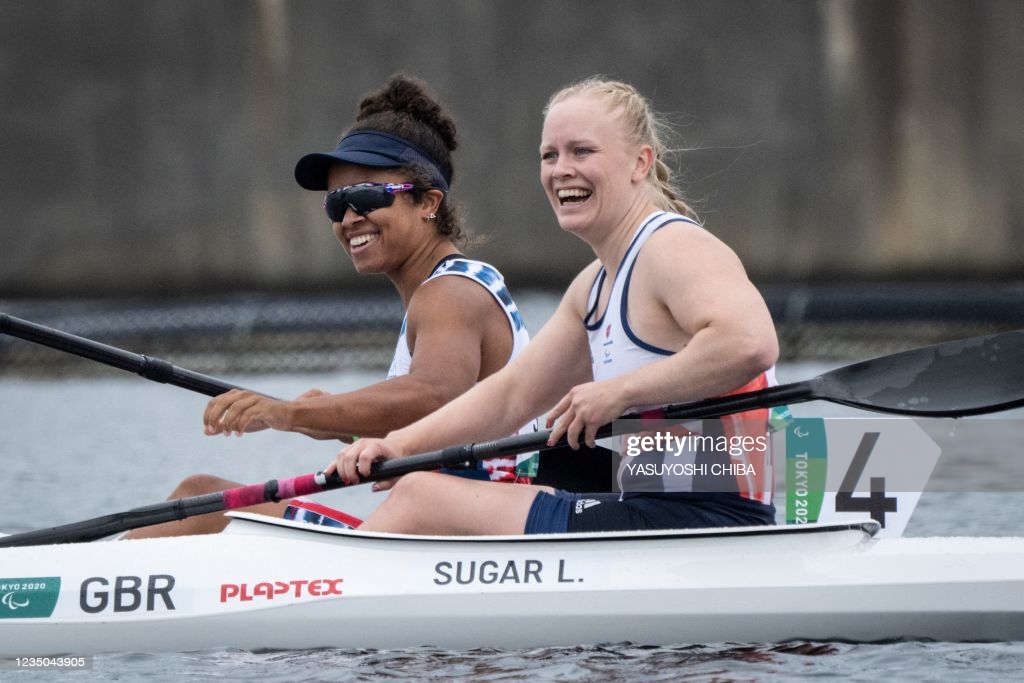 Laura Sugar is all smiles after winning in Tokyo. Pic: Getty Images.

Aled Davies is not a man for looking in the rear view mirror which is why the road to Paris is his focus as he returns from Tokyo as one of four Welsh gold medalists from the Paralympics.

Davies retained his Paralympic title in the men’s F63 shot put to join the likes of Tanni Grey-Thompson and David Roberts as Welsh athletes who have brought gold home for Great Britain at three or more Games.

The Bridgend thrower was one of 21 Welsh competitors in Japan, who picked up a total of 14 medals for Team GB.

That was part of an overall British tally of 124 medals, meaning the Dragonhood accounted for 11 per cent of the metal – not bad for a nation that makes up around five per cent of the UK population.

But rather than rest on his Paralympic laurels, Davies is already glancing further ahead to Paris in 2024.

He won in Tokyo without throwing anywhere near his best and his motivation is not just a fourth gold, but to explore his own limits again in terms of performance.

“I came here for a big performance, I wanted to put down a marker because I haven’t thrown well for the last couple of years,” said the Bridgend athlete.

“I’m ready to go big, I really am. I’m in the shape of my life. I guess it’s just going to have to wait until Paris (2024 Paralympic Games).

“I’m still young and I feel great. I feel like I’ve got a lot to give. Paris is definitely the next stop, even LA (2028 Paralympic Games). We’re just getting started.”

If Davies can be there in Paris – when he still be only 33 – then so, too, can Wales’ other three Paralympic gold winners: Jim Roberts, David Smith and Laura Sugar.

Roberts was part of the GB wheelchair rugby squad that became the first European nation to strike gold, Smith retained his individual BC1 title in Bocia, and Sugar showed she is even better at para-canoe than she was as a para athlete as she set a new Paralympic record on her way to gold in the women’s kayak single 200m (KL3).

Sugar not only coped with a switch of sport, she also dealt with the delay of a year in the Games due to the pandemic.

“The minute I got in a boat I loved it, being out on the water,” she said.

“Our training group is amazing, and you have to enjoy the training every day because we race for what, five minutes out of the year? So you’ve got to enjoy every day of training.”

“Once we got over the disappointment of the delay, it was a really good opportunity to go back to the basics and not worry about having to race, and I think that put me in great stead to be faster here than I would have been last year.”

Smith – who has based himself in Swansea throughout his career and styles himself as boccia’s Cristiano Ronaldo – is now his sport’s most successful British Paralympian with back-to-back titles.

If the ultimate glory went to the gold winners, then maybe the Welsh stories of the Paralympics were to be found with those who took silver.

But in Tokyo, five years later, there was no stopping the Swansea man who took bronze in the class 6 singles event before taking silver alongside Will Bayley in the classes 6-7 team event.

“I thought it was slipping away so it is a dream for me because I have won a lot in my career,” said Karabardak.

“I’ve had some good wins and I’ve won World and European medals but it wouldn’t have been the career I would have wanted without a Paralympic medal.”

Fellow silver medal winner Beth Munro was at the other end of the spectrum.

She only took up para-taekwondo in 2019 after being persuaded by a friend to give it a go at a Disability Sport Wales talent-spotting day and she ended up with second place in only her second major competition.

Reflecting on the part Welsh athletes played in Team GB’s success – and the empowering and inspiring stories they conjured, Owen Lewis – Sport Wales’ assistant director sport system strategy and services – says: “The Games are an example of the art of the possible, with every single athlete having a unique back-story to tell.

“The past fortnight also provided a reminder of the highs and lows of sport. From the jubilation of performing at your best in front of the world to the disappointment of injury for Matt Bush just before the Games and Harrison Walsh just before his competition.

“Wales is a small nation with a huge contribution to make and, while we should take some time to be proud of our Welsh athletes who represent Team GB with such distinction, we should also take the opportunity to strive for more.

“A passionate focus, with our partners, on inclusive athlete development will help us to further broaden and diversify the reach of performance sport and mean that we’ll continue to see success for Wales on the world stage as one of the consequences of being the best in the world at developing athletes.”