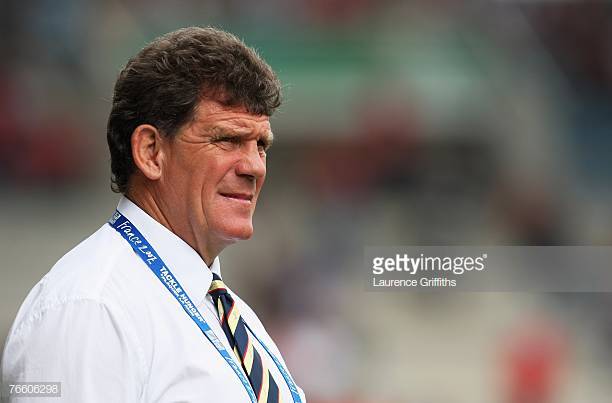 NANTES, FRANCE - SEPTEMBER 09: Gareth Jenkins, the coach of Wales looks on as his team warms up prior to kickoff during the Rugby World Cup 2007 Pool B match between Wales and Canada at the Stade de la Beaujoire on September 9, 2007 in Nantes, France. (Photo by Laurence Griffiths/Getty Images)

Gareth Jenkins has devoted 40 years of his life to Welsh rugby and even in retirement the former national coach can’t give up on his country.

While most 68-year-olds are winding down, Jenkins’ passion for the game burns as brightly as ever and quite frankly it is difficult to think of an individual who has done more to ensure a more prosperous future for the game in west Wales and at the Scarlets than him.

Jenkins has played a significant role in recent successes down west by helping to ensure a conveyor belt of high-quality young talent has been brought through the academy in Llanelli.

The former Wales and Scarlets coach works on a part time basis for the region and scours the UK for new players – a role most people are completely unaware he fulfils.

He is passionate about bringing through the next generation, but believes the Welsh Rugby Union and chief executive Martyn Phillips have serious questions to answer when it comes to player development – especially at the semi-professional level of the Indigo Group Premiership.

“The WRU have made a disastrous job of the Welsh Premiership,” says Jenkins.

“I think it has been a failed process and I worry about the future of Welsh rugby. Those Premiership teams need to be identified as a development tool, but now it’s about who is the best community team in Wales.

“That’s not the point of the Premiership. We need it to be a vehicle to underpin academy development and to provide a platform to develop players who can perform at professional level.

“I want to see it ring fenced. The WRU have failed miserably in recent years in its responsibility to manage the funding that’s been given out.

“If I was putting £1.5 million into something I’d have a clear idea of what I expected in return. I’d have a clear salary banding and I wouldn’t allow players to move for more money than they were having at a particular club.

“The money being paid to some over-the-hill players in the Premiership is immoral. Some of the clubs are paying £25-30,000 for 30-year-old rugby players who aren’t good enough.

“It’s horrendous. Martyn Phillips has created a real long-term problem for Welsh rugby in the way he’s structured the Premiership in terms of player development.”

Jenkins has his concerns over the bigger picture in Welsh rugby, but his part-time role enables him to focus on matters closer to his Llanelli home.

He is extremely confident about the future of the Scarlets – a region he has served both as a player and a hugely successful coach.

After being sacked as Wales head coach following the disappointing 2007 World Cup exit, Jenkins was put in charge of the Scarlets’ recruitment and development.

He retired three years ago, but remains heavily involved and unable to let his rugby passion wilt away.

“When I finished coaching Wales in 2007 I was absolutely positive in my own mind I wasn’t going to look further into becoming a coach again,” he said.

“From my point of view I wanted to develop a sustainable model at the Scarlets for us to be competitive as a region moving forward.

“We  wanted to make sure we could develop a string of professional rugby players on a yearly basis. Twelve years later, I am confident we have delivered that.”

The professional game in Wales continues to face huge challenges in keeping its best young talent out of the clutches of far wealthier English clubs.

Jenkins is trying to reverse that trend and also attract new, Welsh-qualified players to the Scarlets and he is heavily involved in the Welsh Exiles programme.

He added: “I travel up and down the country, but it’s an enjoyable commitment. The other day, I was up at Allianz Park watching Exeter Academy playing Saracens Academy. That was a spin out for me.

“I hadn’t been up there for a while and saw there were some Welsh-qualified players involved. I put a coffee flask in my car and went up there for the day.

“There is huge untapped potential for Welsh rugby in England.”

English clubs have wooed young players for years with the additional offer of schooling at some of the country’s best private schools such as Sedbergh and Millfield.

Jenkins has helped the Scarlets work around such obstacles.

“You’ve got to be innovative to compete with England which we have been at the Scarlets. What we created was a model where we could sit down with the parents to make them an offer more attractive than the English model.

“These players all have to identify they want to join the Welsh development pathway. We don’t chase a player who isn’t registered on the WRU database.

“Gareth Davies, the WRU Exiles manager, has got about 500 players between ages 16 and 18 in England with a couple further afield.

“We’ve got boys coming over from Scotland and from Europe. A lot of these boys are in public school and some of the fees are mindboggling.

“We signed Carwyn Tuipulotu who was up in Sedbergh. They were offering him a free scholarship. A place in Sedbergh is £45,000 a year.

“What we have to do is create a contract that accommodates a player staying in England for the first two years. The expectation then is to come to a university in Wales, preferably Swansea, for a three-year block.

“Carwyn is coming down to Swansea University in September so he’ll have three years in university while being with us. In the meantime we assess whether they are big enough, fit enough and strong enough to play Premiership rugby.

“Then, we attach them to a Premiership club and we chose which club is best for them to play for on a year-to-year basis.

“The job occupies you constantly, but rugby is in my DNA and I find it hard to stay away from it.”

One thought on “The Welsh Premiership Has Been Tarnished, Says Gareth Jenkins . . . But He’s Still Polishing The Next Jewel In The Crown”