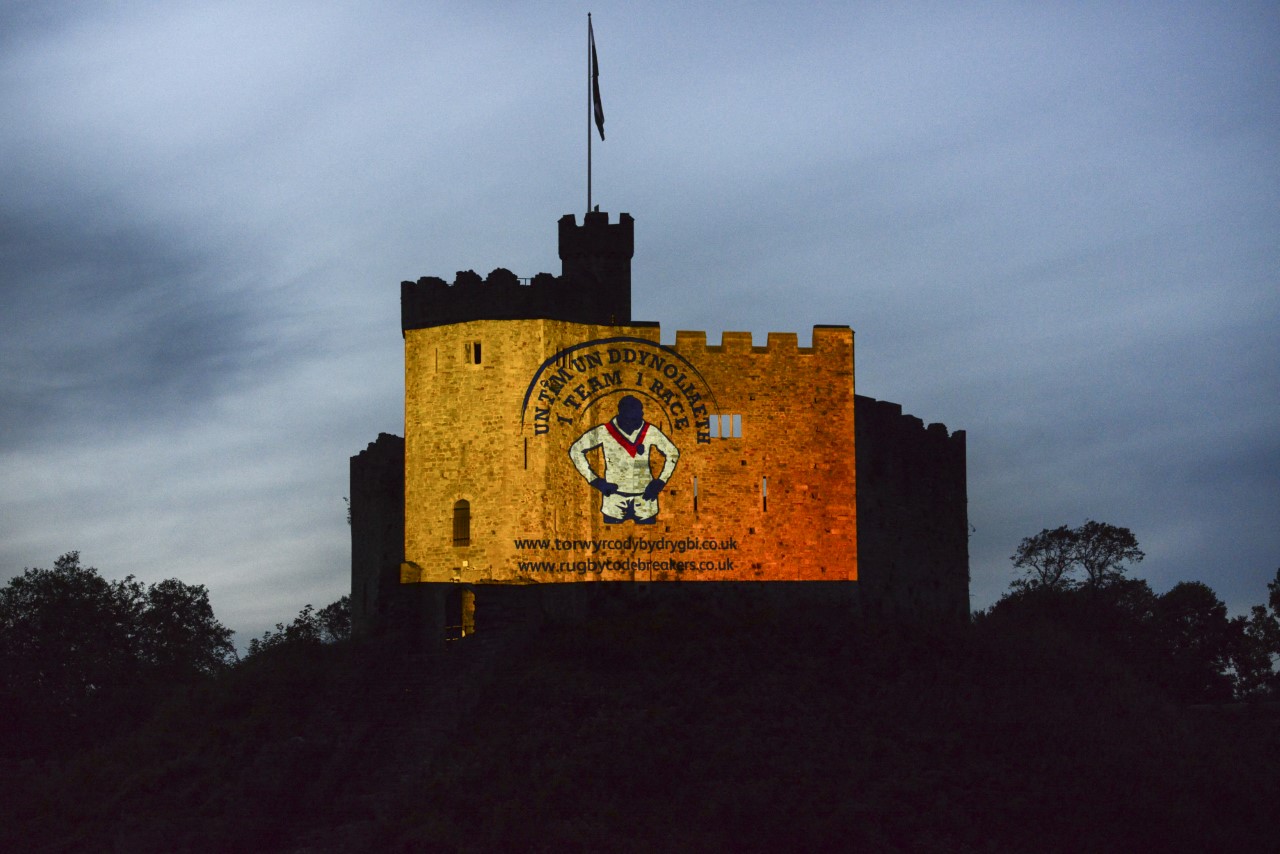 Images of the players have been projected onto the walls of Cardiff Castle.

Welsh rugby league is to be honoured with a monument in Cardiff to some of its greatest players.

Three stars from the 13-man code – which has featured some of the unheralded best rugby talents the country has produced – are to be selected from a 13-man shortlist.

‘One Team – One Race, Honouring the Cardiff Bay Rugby Codebreakers’ is being launched on Sporting Heritage Day, 2020 (Wednesday, Sept 30).

The project will raise money to create three statues chosen from 13 stars who made a telling contribution playing in rugby league over the past 120 years.

All 13 nominees grew up within a three-mile radius of Cardiff Bay. Many battled prejudice and racism before leaving Wales to find fame as superstars in the north of England.

The public will vote for the top three. The results will be passed to the panel for consideration and the players honoured will be revealed ahead of the unveiling of the monument.

Coinciding with this year’s Sporting Heritage Day, giant images celebrating their incredible achievements will be projected onto the walls of Cardiff Castle.

It will signal the launch of the fund-raising campaign and the start of the public vote, which will help choose the three legends who will form the centrepiece of the artwork.

It is hoped the artwork, which could use QR codes to tell the story of Cardiff Bay and the role its residents have played in positive race relations since the docks where built, could go on permanent display in Cardiff Bay within the next two years.

Included among the 13 Rugby Codebreakers, who all hail from the Cardiff Bay area and surrounding neighbourhoods are:

Happy National Sporting Heritage Day! Why not celebrate by giving someone a call and asking about sporting events they remember?https://t.co/iR4B83IHtd #EndLoneliness

The project was inspired by calls from the Butetown and wider Cardiff Bay communities for a fitting tribute to the players who did so much to improve race relations across Britain.

Businessman and philanthropist, Sir Stanley Thomas OBE, will take on the role as the chairman of the fund-raising committee, which also comprises community leaders from Butetown as well as representatives from Wales Rugby League and the Welsh Sports Hall of Fame.

“Cardiff has never really done enough to recognise its sporting greats, especially in the Butetown community, where so many superb rugby league players came from. We must give recognition to this community. I am delighted to have been invited to Chair the committee and I want to see this statue erected within two years. It is vital that players like Billy Boston, now 86, are able to see it completed within their lifetime.

🏉Some of Wales’s sporting greats grew up in #Cardiff battling racism before leaving to find stardom playing Rugby League.

Today on #NSHD2020 the #OneTeamOneRace project is being launched to ensure their stories are not forgotten.https://t.co/TGYllWXwoB pic.twitter.com/x3Yh7MFCcQ

“It is important we start this work immediately and I have made a financial contribution to kick-start it. But it is very much a community project and I am sure they, along with the rugby league clubs and authorities in the north, will get behind it.”

“The exceptional achievements of so many rugby players from Cardiff Bay’s, multi-cultural melting pot have for too long been overlooked. They not only brought honour to themselves, their city and their nation, but also helped to break down the barriers of racism and social injustice. They strode confidently into the wider world, and their example and achievements are an inspiration to us and future generations. It is time for Cardiff to properly celebrate them”

“To have a project like this, honouring so many of the greatest Welsh rugby league players of the past, is just monumental. It is a watershed moment for us.

“In the North of England they all talk about Tiger Bay and the great players who went up to play rugby league from Cardiff. We need to reflect on our rich past and use it as a signpost for the future.

🏉Some of Wales’s sporting greats grew up in #Cardiff battling racism before leaving to find stardom playing Rugby League.

Today on #NSHD2020 the #OneTeamOneRace project is being launched to ensure their stories are not forgotten.https://t.co/TGYllWXwoB pic.twitter.com/x3Yh7MFCcQ

“It is not just about erecting a statue, this is a project that has at its heart education, sporting excellence and social justice.”

“This is a fantastic project that has our wholehearted support and backing. Cardiff has produced so many of the world’s finest rugby league players and a statue to recognise their outstanding achievements is the most fitting way to not only record their incredible contributions, but also to act as an inspiration for the future. None of them ever forgot their roots, but they were able to leave their own communities and use their considerable sporting talents to enhance not only their own reputations, but also that of Wales.”