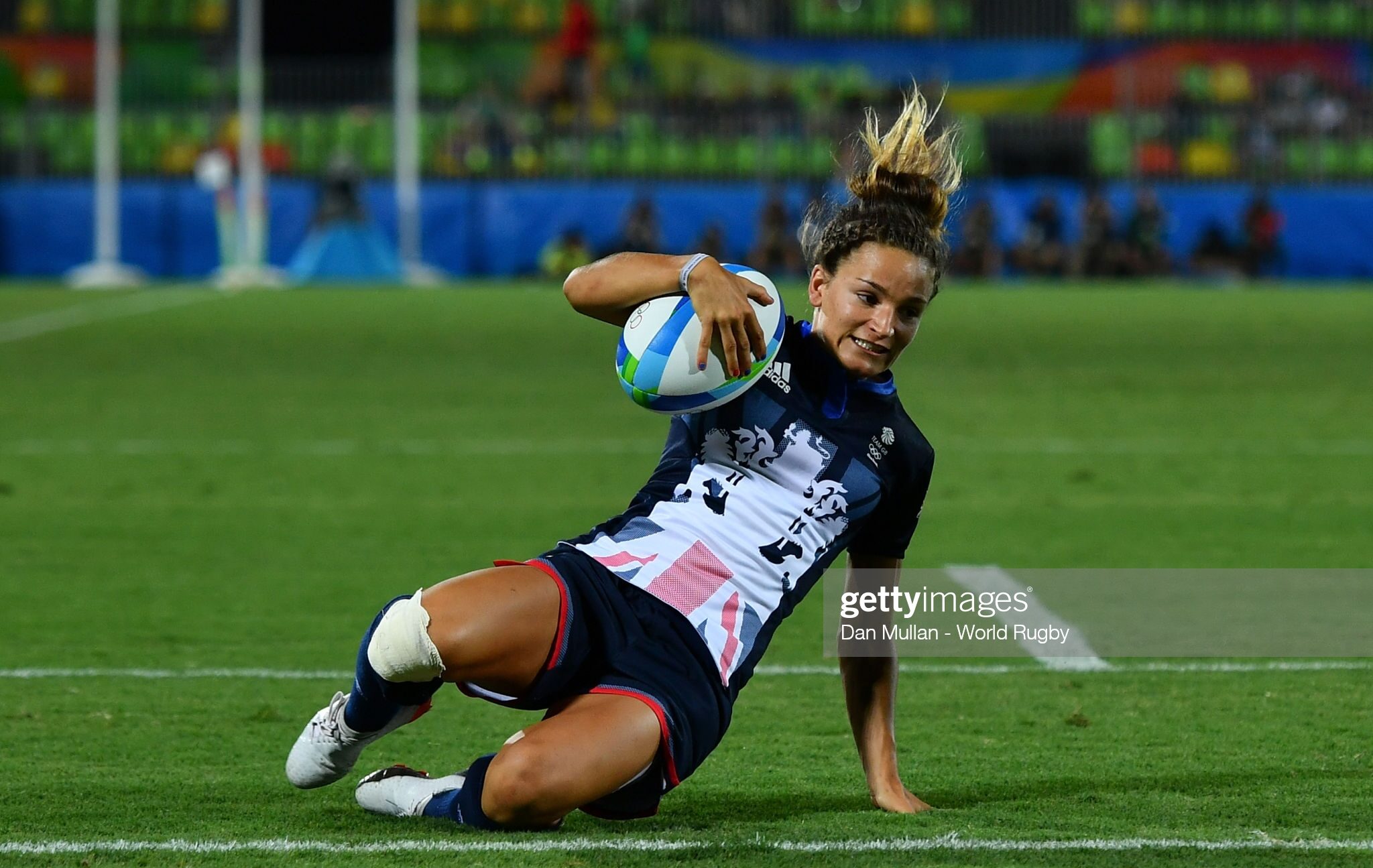 Jasmine Joyce in action at the 2016 Olympics. Pic: Getty Images

To go to one Olympics is a huge achievement but to go to two is phenomenal- This is the case for rugby sevens star Jasmine Joyce who is eager to write the wrongs of her experience in Rio by pushing for gold in Tokyo, as she tells Fraser Watson.

The then 20-year-old had burst onto the scene at the Rio Olympics, famously searing to the try line with her first touch against hosts Brazil, and helping the Team GB Sevens side into an eventual third placed play-off match against Canada.

It was that 20 minutes which would taint an otherwise incredible experience.

Joyce and co had beaten Canada in the group stages but this time around the latter prevailed 33-10, subsequently taking the Olympic Bronze medals home with them.

The opportunity to banish that lingering memory is on the horizon though. Having again been selected by Team GB for this summer’s delayed Olympics, this Saturday she’ll join the squad in boarding a flight to Japan, with the women’s sevens scheduled to start on the 29th July.

“I only watched the Canada game for the first time three months ago,” she admitted.

“I hadn’t wanted to relive the emotion of it all before then. One of the girls sent it to me and watching it, the hurt of not coming away with a medal is definitely still there.

“It gives me more drive and incentive to go to Tokyo with the team and not just push for a medal, but to push for gold. I don’t want me or anyone else to have that feeling again.”

Mind you, Joyce could perhaps be forgiven for not designating her spare time to watching archived tapes. For a start, she barely has any.

Life after Rio became frenzied, and has barely slowed down since. A quiet day off has become something of a rarity for an individual who in more ways than one, lives life in the fast lane.

Our interview here came during a flying visit back to her native St Davids, on a morning which incorporated two school visits and a hasty dentist appointment. Throw in recent PGCE studies and the small matter of training schedules, and you can see why relaxation time is of a premium.

“Life is really busy at the moment but I love being busy. Lockdown definitely taught me that.

“I’ve just been back to my old primary school and it’s been nice to see old faces, and see children who I’ve done some coaching with before.

“They were very excited and had made banners. They’ve been doing a lot on the Olympics. I’m off to a school back where I live in Cross Hands now to see what pupils have done there too.”

The 25-year-old is at least used to the fanfare. Having travelled to Rio a relative unknown, she was soon elevated to national stardom and life changed. Short walks to the local shop would take up to an hour, and media requests went into overdrive.

To her credit, a modest and down to earth individual remained that way through it all, and the same characteristics continue to shine through now. But she accepts that as one of just three players to have experienced the games in Brazil, Abbie Brown and Natasha Hunt the other two, expectation levels will be different this time around.

Since Rio the winger has cemented a place in the Wales side at 15-a-side level, represented the Babarians, and seen her club career prosper. Her try exploits with the Bristol Bears in last season’s Premier 15s campaign regularly graced YouTube and social media.

No longer can she enjoy the luxury of being an unknown quantity – a notion she’s willing to embrace.

“Things are obviously a lot different this time.

“Due to the pandemic the whole set up has been a lot different anyway. But five years ago no one really knew who I was – this year there has been more pressure to be selected and now also to go out there and perform.

“But I enjoy the pressure and people knowing who I am – it makes me very excited to get out there.”

There will be little margin for error in the group stages against Russia, Kenya, and 2016 Silver medallists New Zealand, but Joyce says the squad’s stringent preparation protocols, implemented in light of the Covid-19 pandemic, may yet yield an advantage.

“It has been really tough as we haven’t had long together or much tournament time for obvious reasons.

“But we feel so fortunate to be able to actually train and still have the opportunity to come together and prepare for an Olympic Games.

“It’s madness to think now it was all meant to be a year ago and in a way, we still don’t know what to expect when we get there.

“But as a squad we’ve followed all the protocols. We’ve been locked away in our rooms for breakfast, lunch and dinner, and been doing everything to make sure someone doesn’t have to stay behind because they’ve caught Covid-19.

“Once we actually get there I think it could be a lot easier for us as we’ve had to follow strict protocols anyway, whereas other teams potentially haven’t.”

Right now, to say there was a lot for Joyce to focus on would be a ludicrous understatement.

But is there ever a quiet moment where things sink in a little? Where there’s a realisation that a player of humble rugby beginnings, whose career path began with Ysgol Dewi Sant, St Davids RFC mini’s, and then Haverfordwest Ladies, is about to grace the biggest stage of all again?

“There are times, maybe when I’m in the car, that it dawns on me I’m going to a second Olympics,” she admits.

“It seems unreal and I can’t accept it until it happens – when I’m off the plane and competing for Team GB in Tokyo – only then it will be real.”

And regardless of what transpires for Joyce or her teammates, this time she’ll be ready for the aftermath. A nice aftermath that is.

Of that there’s no doubt.

And for Joyce, that same support will feel that little bit more special, if she returns home with an Olympic medal around her neck to compliment it.