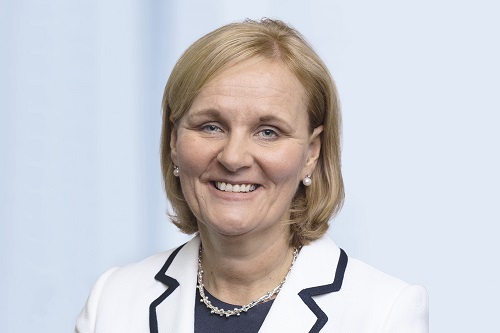 Amands Blanc joined the Professional Rugby Board in December.

The highest profile woman in Welsh rugby could soon be leaving after only seven months in her role.

Amanda Blanc – the independent chair of Welsh rugby’s Professional Rugby Board – is likely to step down after only being appointed in December.

Blanc has been made chief executive of insurance giants Aviva – parachuted into the top position in the company after former chief executive Maurice Tulloch left “for family health reasons”. He also retired from his position on the Aviva plc Board and his successor took over the reins immediately.

It could mean the top three roles in Welsh rugby could soon all be vacant, with chief executive Martyn Phillips still likely to leave even though he has extended his timetable for departure due to the crisis caused by the coronavirus pandemic.

Welsh Rugby Union chairman Gareth Davies is also due to step down from that role later this year, having held the position for the maximum stay. It would require a rule change for Davies to remain, although even if he is replaced as chair he could still stay on the WRU board.

Blanc, 53, a former chief executive at Zurich Insurance, is one of the busiest senior executives in Wales and was a great catch for the Welsh Rugby Union when she agreed to take on the role at the end of last year.

At the same time she became a non-executive director at Aviva and also joined specialist motor insurer ERS in a similar capacity. She was also working as a senior adviser with global insurtech company, Trõv.

Given the dire financial state of the professional game in Wales due to the coronavirus crisis, Blanc’s experience and skill was seen as critical in helping to create a plan to keep the four regional teams alive.

Over the past 30 years she has held senior roles at Axa, Towergate, Groupama, and Commercial Union, and chaired the Insurance Fraud Bureau. More recently, she headed up Zurich’s Europe, Middle East and Africa business.

With some regions predicting losses of £5m plus in the current financial year, and players having to accept pay cuts of 25%, Blanc’s expertise has been in high demand at the PRB table.

The WRU are also facing losses of up to £50m this year with matches being cancelled and replacement fixtures as yet not able to be played in front of fans.

“Aviva is a great company, full of great people, and I’m honoured to be given the opportunity to help shape its future. I want Aviva to be the leader in our industry again and the first choice for our customers and partners,” said Blanc.

“We will look at all our strategic opportunities, and at pace. I have been on the Aviva Board since the start of this year and have a good understanding of where the business has its strengths and what actions we should take across our portfolio.”

A statement from Aviva said: “She will continue in her voluntary role as Chair of the Welsh Professional Rugby Board.”

The WRU posted a tweet which read: “Many congratulations to our Professional Rugby Board (PRB) chair Amanda Blanc who has been appointed CEO of FTSE 100 company @Avivaplc – also great news for Welsh rugby that she will continue in her voluntary role with the PRB.”