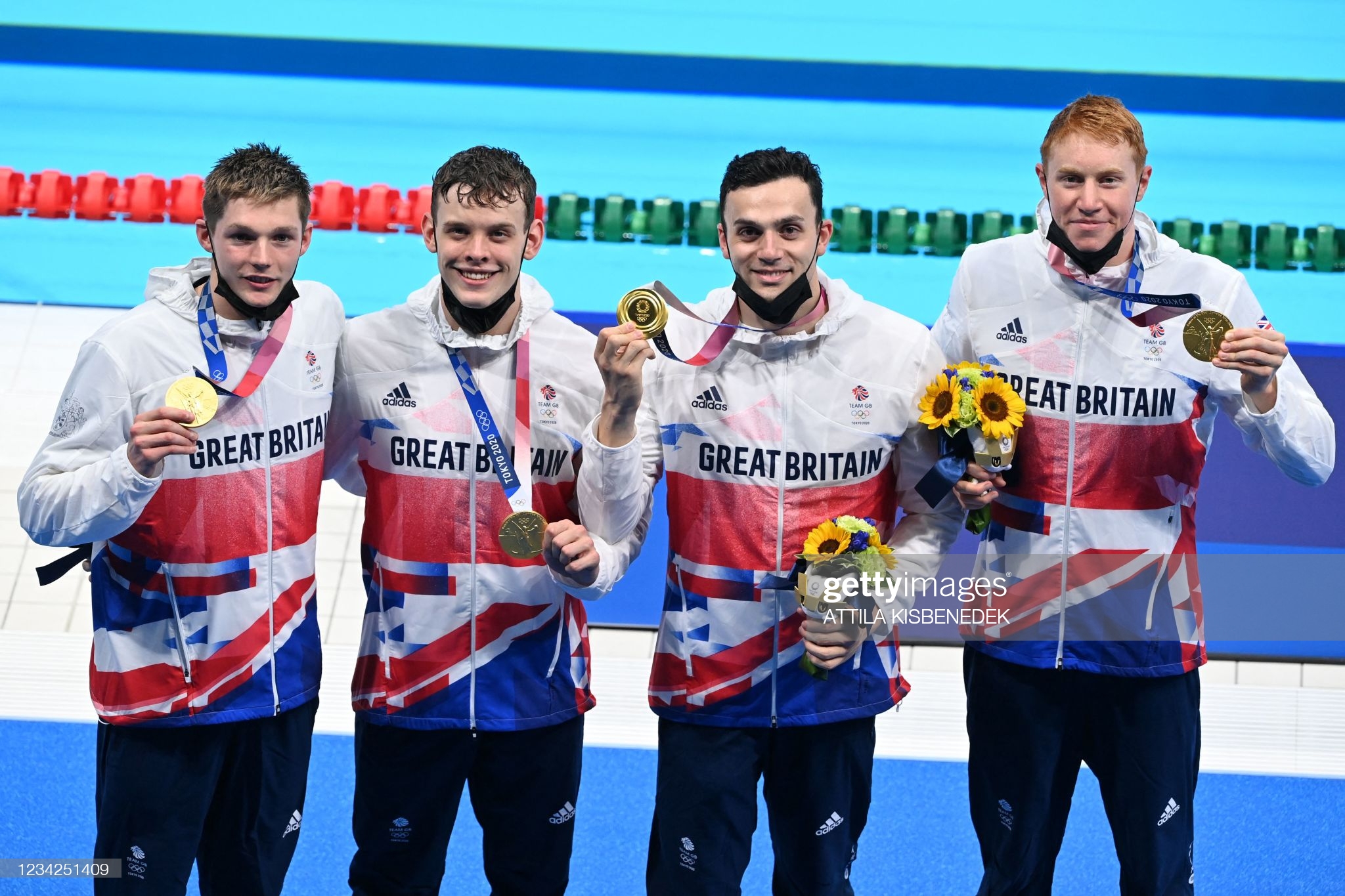 The Welsh pair were part of a dominant Great Britain squad that struck gold, ahead of the Russian Olympic Committee in second and Australia, who took the bronze.

The British quartet won in six minutes 58.58 seconds – an emphatic 3.23secs clear of the Russians and only fractionally outside the world record by three hundredths of a second.

Richards’ fellow Swim Wales star Jarvis had earlier played his part and shown his experience with a superb swim for GB in the heats, that enabled Scott – who swam the anchor leg in the final – to be rested.

The triumph means Welsh swimming has its first gold medal in the pool since 1912 when Irene Steer won gold in the 4 x 100m women’s relay in Stockholm.

Martyn Woodroffe went close with a silver in 1968, before David Davies did the same in 2008. Then, Jazz Carlin won two silver medals five years ago in Rio 2016.

But now, more than century of waiting is over.

For Richards, it was confirmation of his status as one of the new rising superstars of British swimming, while 29-year-old Jarvis was able to make amends for the disappointment of narrowly missing out selection for the last two Olympics.

Richards – who spent weeks during lockdown last summer training in a giant home-built paddling pool in his garden – said: “When you are racing with these guys, having a great leg comes easy.

“These are the best freestylers in the world and so the privilege and the confidence they give me for someone of my age, money can’t buy that.”

Dean said: “’I can’t put it into words. I couldn’t yesterday and I can’t today. I can’t thank these boys enough. Unreal. You can see how much it means to us.

“Just a big thank you to Callum Jarvis who is sitting in the crowd. We couldn’t have done it without him.”

There could yet be more medals for Welsh swimmers, too, with Alys Thomas having made Thursday’s final of the women’s 200m butterfly.

Thomas finished fourth in her semi-final, but her superb effort was enough to give the Commonwealth champion a place in the final in her first Olympics.

Richards, Jarvis and Thomas are part of a group of six Welsh swimmers at this year’s Games, along with Kieran Bird, Dan Jervis and Harriet Jones. The magnificent half dozen represent a record tally for Swim Wales in a Great Britain Olympic squad.

“Wow! What a performance,” said Nicholas.

“To represent your country at the Olympic Games is the pinnacle of any swimmer’s career and we are all so proud of all the Welsh swimmers who have made it to Tokyo this year.

“But to see two Welsh swimmers crowned Olympic champion after such a challenging year is out of this world.

“We at Swim Wales are all so incredibly proud and happy for Matt and Calum and are privileged to have supported them alongside British Swimming on their journey.

“I’ve known both of them since they were young lads. They are both such awesome guys in and out of the pool, consumate professionals and no one deserves this success more than them.

“A huge amount of credit must go to their coach, Jol Finck, and all of the other coaches and sport scientists who have guided and supported them throughout their careers.

“’I am sure that I speak for many people involved in our sport when I say that today is a very special day.

“To see two of our super six Tokyo Olympic debutants secure a gold Olympic medal is a dream come true and testament to the hard work that the athletes, parents, coaches and support teams have put into this journey.

“Swim Wales have seen many great achievements from our swimmers in recent years at the Commonwealth Games, World Championships and the Olympic Games but we haven’t seen a gold medal from the pool since Irene Steer brought one home in 1912.

“We are all extremely proud of Matthew and Calum and we can’t wait to welcome them home with our four other amazing Welsh swimmers.”

The relay gold is Great Britain’s third swimming gold of these glorious Games – their best tally since 1908 – and their fourth altogether.