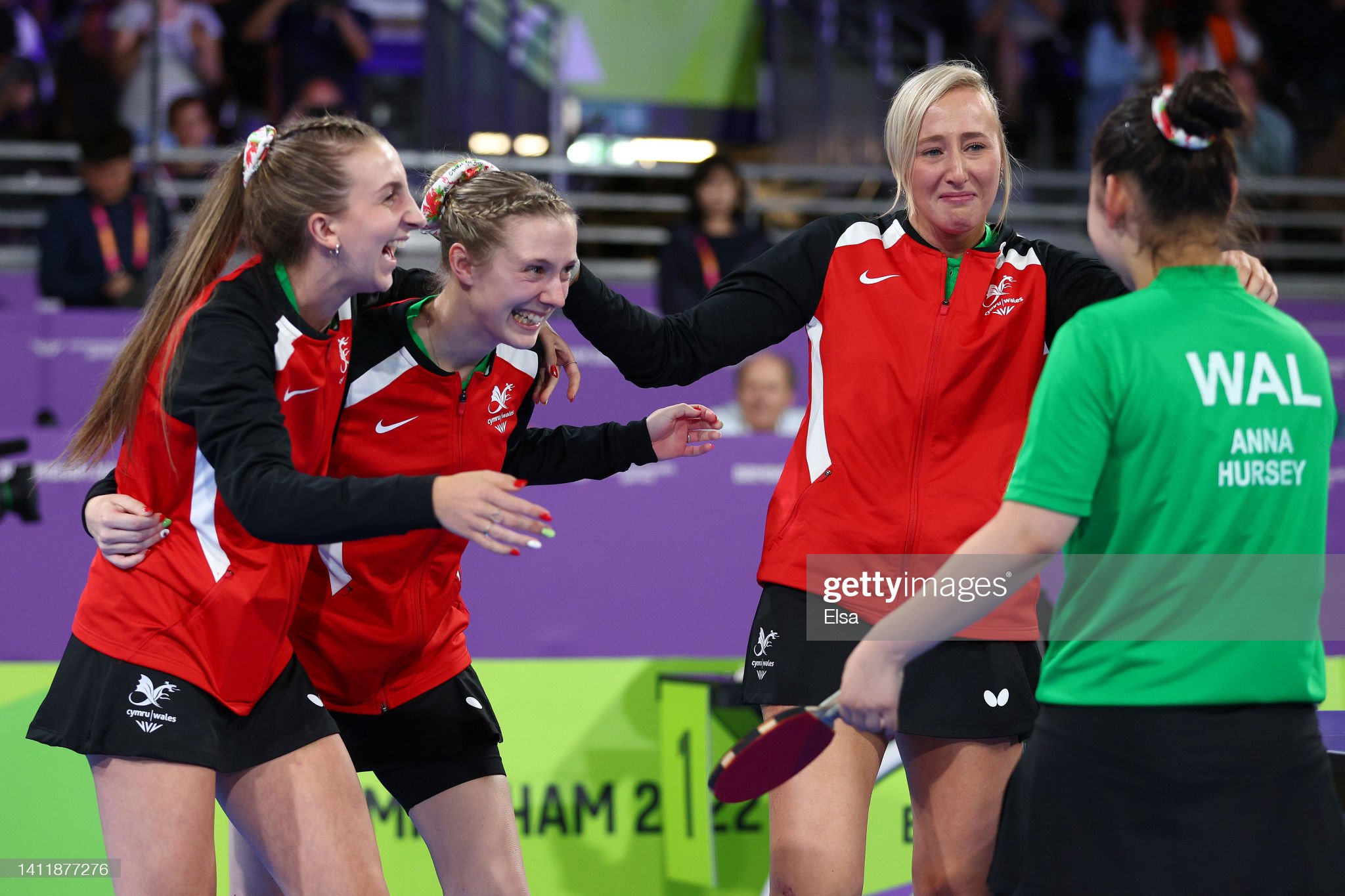 Welsh female Table Tennis players are hoping their historic fourth placed finish in the team event will inspire them for success in the individual category.

Whilst Wales fell agonisingly short of a medal in fourth place they can take the many positives from their record breaking run, finishing in their highest ever position at the Commonwealth Games.

Having beaten Canada 3-2 and England convincingly 3-0 in the earlier rounds, Wales secured a historic semi final spot against Malaysia

The history makers played astonishingly good table tennis throughout the competition and took Malaysia, who had beaten the current holders India in the previous round all the way in a game that could have gone either way.

Wales lost out to Malaysia by the bearest of margins in their semi final clash on Sunday evening, after a mammoth three and a half hour clash the game went down to the very last point of the last set.

Some seriously motivated welsh national squad players today thanks to amazing efforts of the Women’s team at Birmingham. @walesTT pic.twitter.com/IAE9zmGFSH

Captain Charlotte Carey from Ebbw Vales said: “We just have to use that hurt and experience and use it to really motivate ourselves and push on from here. We are a strong team and I am really proud of us all.

“It was amazing in the semi final, Malaysia had their vocal support, ours were loud too! I could hear my parents and we just wanted to make them proud.

“It wasn’t to be our day unfortunately, it was heartbreaking at the end because we got so close.

“I’ve never played a game that long before really. I think that was sort of the reason why we weren’t able to get over the line against Malaysia.

“Malaysia have played those sorts of games and come through them and it’s something we haven’t really done before. But that’s just experience and hopefully that will now help us in the future.

“We are gutted but we are pleased to have got so far in the competition.”

Thank you so much to everyone that has sent words of support the last few days! We’ve had some amazing matches with extreme highs and devastating lows but we’ve given everything we had. Proud to be the first Wales Womens TT team to reach the semi finals of Commonwealth Games🏓🏴󠁧󠁢󠁷󠁬󠁳󠁿 pic.twitter.com/a0MJIM3xEK

It was heartbreak for Carey who was tasked with the challenge of taking on the experienced Ho Ying in the deciding game, losing in the final game to leave the score 3-2 to Malaysia.

Stephen Jenkins, National Coach added: “I am just super proud of the girls, we can take so much from this event.

“We will be an even stronger team in four years time. We narrowly missed out yesterday. We were one set away from getting either a silver medal or a gold.

“That’s how close it is in sport. We tried, we fought every point, it just wasn’t enough against Malaysia and then we played an amazing team in Australia, we knew it was going to be tough, we were underdogs, but the girls fought for every point and you can’s ask for more than that.”

Wales struggled early on in the bronze medal match against Australia who, using their experience took the game to Wales in the early stages knowing the Welsh were coming off an energy sapping loss to Malaysia, with little turnaround.

"We've created history in these games" 🙌

“Yesterday’s game took the energy out of the players. I think yesterday was our real chance at a medal and I think we went into the game knowing it was going to be a tough challenge,” said coach,” Jenkins said.

“It was such an emotional roller-coaster last night, at one point we thought we were going to win the match, so we had to really pick up the girls this  morning, it was tough for a couple of hours. We still believed we could win.”

The 26-year-old Carey added: “The turnaround didn’t help, especially against the stronger players who are more experienced on the biggest stages.

“We have been in this situation now, when you reflect on it, to come fourth is an amazing achievement and we can definitely carry that into the next games.

Carey rallied her troops throughout the games. Despite missing out on a medal, Carey believes her team can take the positives from their historic finish.

“We have made it to the semi final, we made history.

“We were still really hurt from last night, I didn’t get too much sleep personally. It has been really tough, I think realistically we knew Malaysia was going to be our biggest chance. Australia was always going to be a tough task.

“We have made history, we are definitely really proud of ourselves and these performances are just going to motivate us going further in the next games. We want to make bigger history next time, we want that medal.”

Finishing fourth is hard to take in any sport, none more so than in this example, having been so close to a medal. Despite this, what are some of the positives that the team have taken from their run?

Jenkins said: Every time I open my phone i’ve got 50-100 messages from not only table tennis people but people who haven’t watched the sport before saying how proud they are of the team spirit that comes across on tv.

We are like a family pretty much, people have been inspired by other sports back home, why can’t we do that now too! I just want people to pick up a bat and start playing table tennis. Hopefully we can find the next Charlotte Carey or the next Anna Hursey in the next generation.

“There are so many stars in Wales, we produce so many good champions in all sport. I just hope people start playing table tennis, give it a go and enjoy themselves really.”

“I think it will take a while to get over but the heartbreak really was last night, we came here a little bit down. Against Australia we were the weaker team, they really took control from the off and fair play to them,” Carey added.

“Me Anna and Lara are young, Chloe is only two years older than me and we definitely have a few more games left in us. I am really excited for the future.

Travelling Welsh family and support ensured that it was a raucous atmosphere in the NEC hall 3 throughout Wales’ campaign. The crowd was fully behind the team and almost took them over the line against an experienced Malaysian side.

Jenkins said: ”I believe the support we have had here at the NEC is one of the reasons why we have finished fourth.

“We played England the other day, it is obviously their home games, but its not about quantity, it’s about quality. We had our family and friends there and our Welsh support was louder than the home crowd who had more numbers.

“It’s been a really exciting time and we have got loads of support. I just think what we have achieved as a group is immense and I am proud to be part of the Welsh team.

“I hope we have inspired young boys and girls to take up table tennis in Wales the last few days.”