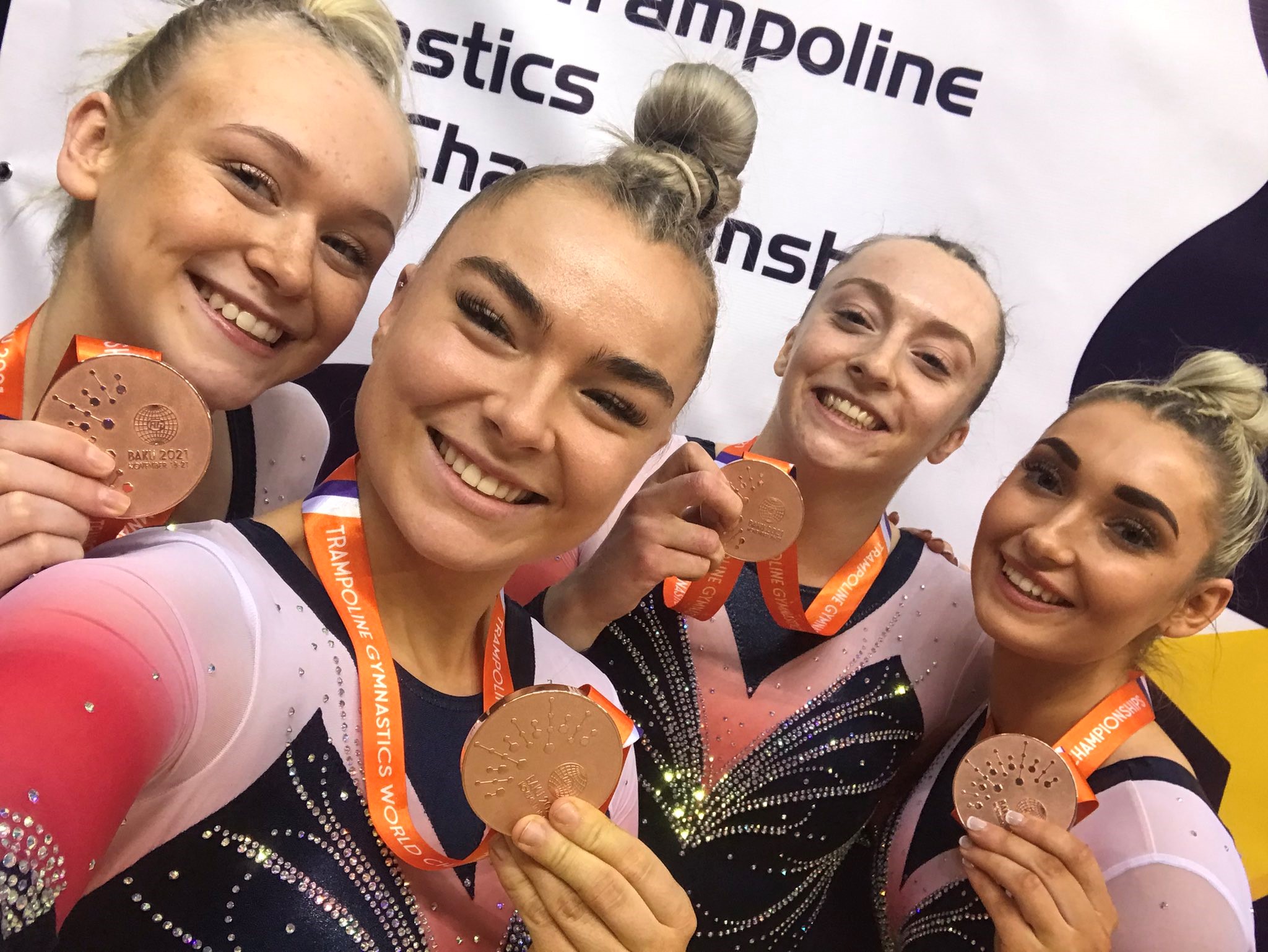 The 23-year-old, who is originally from Swansea and now trains out of City of Birmingham GC, was part of a four-strong women’s tumbling team and took her place on the podium alongside Megan Kealy, Ashleigh Owen and Louisa Maher after a memorable final.

Surman, who is a two-time World Age Group medallist, also placed fifth in the world in the individual women’s tumbling final – where Kealy secured a stunning gold.

Coming into the competition as defending team champions, Britain’s women tumblers were at their best again in qualifying.

They scored well across the board, with the top three scores going towards their final total of 196.500, enough for them to qualify in top spot.

Megan’s performance in qualifying also secured her a place in the individual women’s final, going through in sixth after scoring 32.300 and 32.500 (64.800) for her two tumbling passes.

In the women’s team final, three gymnasts competed for each nation, with all three scores counting. Each gymnast would compete one tumbling pass, with the total scores added together to decide the world medallists.

Owen – a late replacement for this event for injured Shanice Davidson – was the first to compete for Britain in the final. She opened with a score of 30.800, putting the team in fourth place after the first round.

Next up was Surman and she boosted the team’s total with a brilliant pass to score 33.200.

And then, in fifth place and needing something special with the last tumbling pass of the final, it was down to Kealy, Britain’s top individual scorer in qualifying, and she produced when it mattered most. A score of 34.100 saw the team climb the leader board to clinch bronze behind France and Belgium.

Surman said: “It’s my first senior world championships so it was really enjoyable to be out there with the team. It was great to have Meg Kealy out there with us too as the experienced member, and she definitely helped me and Ashleigh out there.

“It was quite pressured, but I just tried to breathe and remember what I’ve done in training, trust myself, know that I can do it – and just to think of all the good passes that I’ve done before.”

Surman would also be back to compete in the individual tumbling final, alongside Kealy – who herself was back in the form that saw her win world bronze two years ago.

Kealy had qualified in second but saved her best for the final with two passes that will live long in the memory.

Her opening pass set the benchmark as she kept brilliant momentum down the tumble track to score 34.400. That score saw her in the lead at the halfway stage.

Surman was aiming to make it two Brits on the podium in this event for the second worlds in a row but just missed out by 0.500 of a mark to finish fifth.

It was a memorable weekend overall in Baku for Britain’s trampoline, tumbling and DMT gymnasts.

Of the 23 gymnasts selected to represent GB, 11 were competing as seniors at a World Championships for the very first time.

Other highlights included a silver for the men’s tumbling team, while double Olympic medallist Bryony Page became trampoline world champion and caps a remarkable year in which she has already won Olympic bronze.

There was also a further bronze for Britain in the all-around team final, which included Kealy and Page.

The event saw all eight disciplines from the championships represented and it was the first time that Britain had contested the final.