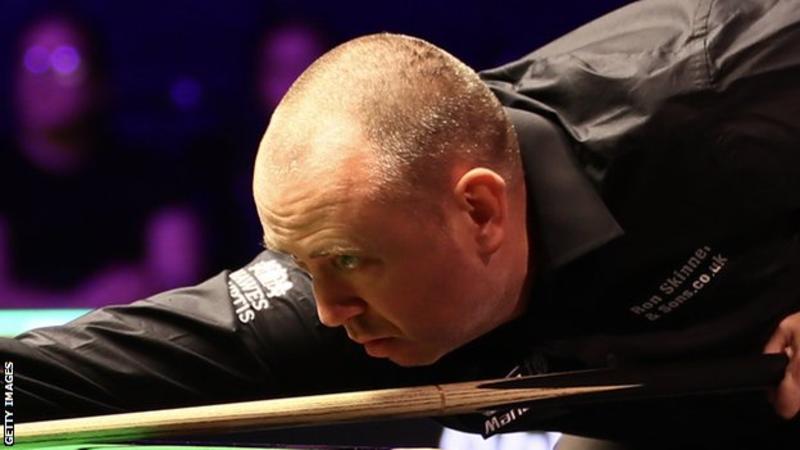 Welshman Mark Williams crashed out of the ManBetX Welsh Open snooker championships in Cardiff – and tore the buttons off his shirt.

Williams, the former World champion from Cam, lost 4-1 against Scotland’s Anthony McGill and then insisted the damage to his shirt was not down to frustration.

“I just couldn’t wait to get the shirt off,” said Williams. “It was too uncomfortable for me and there’s no frustration. When you are outplayed you have to hold your hands up and wish Anthony all the best.

“His safety just tied me up in knots and was one of the best I’ve come up against. Every time I went to the table I seemed to be on the cushion or behind the colours snookered.”

McGill won the first thanks to a break of 62, while Williams made it 1-1 after scoring 97 during one visit to the table at the Motorpoint Arena, Cardiff.

But Glasgow-born McGill kept his nerve to win 4-1 and now plays Stuart Bingham or Yan Bingtao.

It's hotting up in Cardiff 🔥@ronnieo147 plays his 100th Welsh Open match tonight, clashing with @SohailVahedi at 7pm!

“It’s slightly frustrating – it wasn’t a good match,” said Stevens. “I’m not that bothered really and I’m looking forward to the World Championship now. I’ve put a lot of work in for that.”

Daniel Wells, from Neath, was another Welsh player to go out, losing 4-2 against Gerard Greene, but Dominic Dale safely booked his place in the last 16, beating Mark Allen 4-2.

Coventry-born Dale, aged 48, sees himself as Welsh having moved to Wales with his family at the age of 10.

“My father was made redundant and he bought a cottage in Wales,” said Dale, who was born in Walsgrave Hospital, Coventry entry and grew up in Brownshill Lane near the old Jaguar factory in Allesley.

“I moved to Wales and that’s when I started playing snooker so I entered all the Welsh junior and amateur events.

Trump – who made two centuries of his own – returns at 8pm to face Stephen Maguire #WelshOpen pic.twitter.com/h88zG93XFs

“That’s why I consider myself to be a Welsh snooker player, but I will always have a strong affiliation with my Coventry roots.”

Dale, nicknamed the Spaceman, moved to the Penarth area with his family when he was a schoolboy.

He is the only Welsh players through to the last 16 at the Welsh Open and he plays England’s Shaun Murphy, who beat Ben Woollaston 4-1.

O’Sullivan expressed his delight with the support he attracts, saying: “I’m so thankful over the years, with the way I play and the enjoyment I give to people, and I feel the crowd’s love everywhere I go around the world.

“It’s always special at this stage of my career, and I just want them to know that I appreciate it and that I know they’ve supported me for a long, long time.