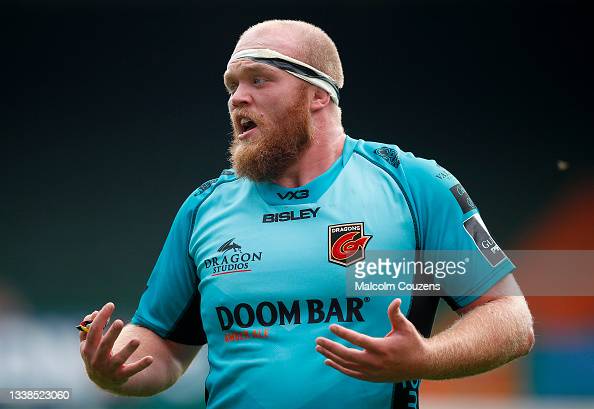 Joe Davies insists the Dragons will not settle for more hard luck stories as their European campaign reaches an early crossroads.

The big second row is keen to throw his weight around and help subdue high-flying French Top 14 side Lyon when they visit Rodney Parade on Friday night in a European Challenge Cup tie that is live on S4C.

Davies was in the side that lost their opening match of the tournament, 22-16, away to Perpignan last week – a defeat which made it five losses on the trot for Dean Ryan’s men.

That sequence has given critics of the Dragons plenty of ammunition to claim not much has changed in Newport, where the accusation is that they have grown used to being among the also-rans in every tournament they enter.

TEAM | Team is ️ for our final home game of 2021 as we host @LeLOURugby at Rodney Parade tomorrow evening!

Davies, though, believes the squad has sufficient talent and enough determination to prevent a slump becoming a full-blown crisis.

“We slipped off things in the second half last week and that was disappointing,” says the 26-year-old, who is now in his sixth season at the region.

“No-one is here to lose. Everyone hates losing and every time we do lose, it hurts.

“We have a good squad. All the players deserve to be there. In a sense, we don’t really know what is going on at the moment. We are trying to work it out as a team.

“Things are not going our way, but it isn’t for a lack of trying. It’s just a few individual errors now and again.

“But the quality of player here is clear – it’s by far the strongest group in my time at the Dragons. We have strength in depth and the quality in positions like the back row is incredible.

“So, there is frustration because we are not getting what we want out of games. But there’s no point pointing fingers, the blame has to be shared. We have to work things out as a group.

“I have struggled with my form a bit this season. It’s been a bit up and down.

“Hopefully, I can get back to where I was. There is more competition than before, but it’s competition that makes you improve as a player.”
The standings in the French domestic table would seem to suggest things are going to get tougher for the Dragons, rather than easier.

Perpignan are struggling near the foot of the Top 14 table, but Lyon are up in fourth spot and can boast talent drawn from far and wide that includes New Zealanders Lima Sopoaga and Jordan Taufua, Fijians Temo Mayanavanua and Josua Tuisova, as well as French veteran Mathieu Bastareaud.

It’s here its Friday so why not join us at Rodney’s bar @rodneyparade before the @dragonsrugby @ChallengeCup_ clash with @LeLOURugby for an end of 2021 rugby celebration as the Dragons renaissance of the euro campaign pic.twitter.com/6tHZ5AB7ki

Lyon opened their European campaign with a 19-13 win over Gloucester, but a win for the Dragons would open up their group, where three qualify for the knockout stages from a five-team pool.

Former Wales U20 international Davies was in the Dragons side that earned one of their more notable recent home wins against a French club – back in 2019, when they hammered Castres, 31-17.

“I remember that game against Castres. They were a very talented side, but we matched them up front and we got on top

“We need to do the same again – put down a platform and let our backs do their thing.

“People talk about different tournaments being priorities, but for us, every game is a priority. Last year European rugby was very disrupted, so we are keen to go well this time.”

Going into the international break for November, the Dragons’ form had been promising. They earned a hard-fought win over Connacht in Galway and lost by single point to Leinster.

But the autumn Tests – in which six Dragons players featured – seemed to disrupt their rhythm and they have so far been unable to pick things up.

PROGRAMME | Our digital match day programme for tonights @ChallengeCup_ fixture with @LeLOURugby is available to download now and it’s !

International calls are likely to be an increasing demand for the region, however, rather than something that lessens – especially given the immediate impact made by forwards Taine Basham, Ben Carter and Will Rowlands.

Davies has been impressed by Basham, in particular, and says: “Taine had an awesome autumn series.

“I am a bit in awe of him when he runs. He stays on his feet and break tackles that he shouldn’t really be breaking. His movement off either foot is so hard to predict. He’s incredible.

“It bodes well for us that he has committed his future to the region.”