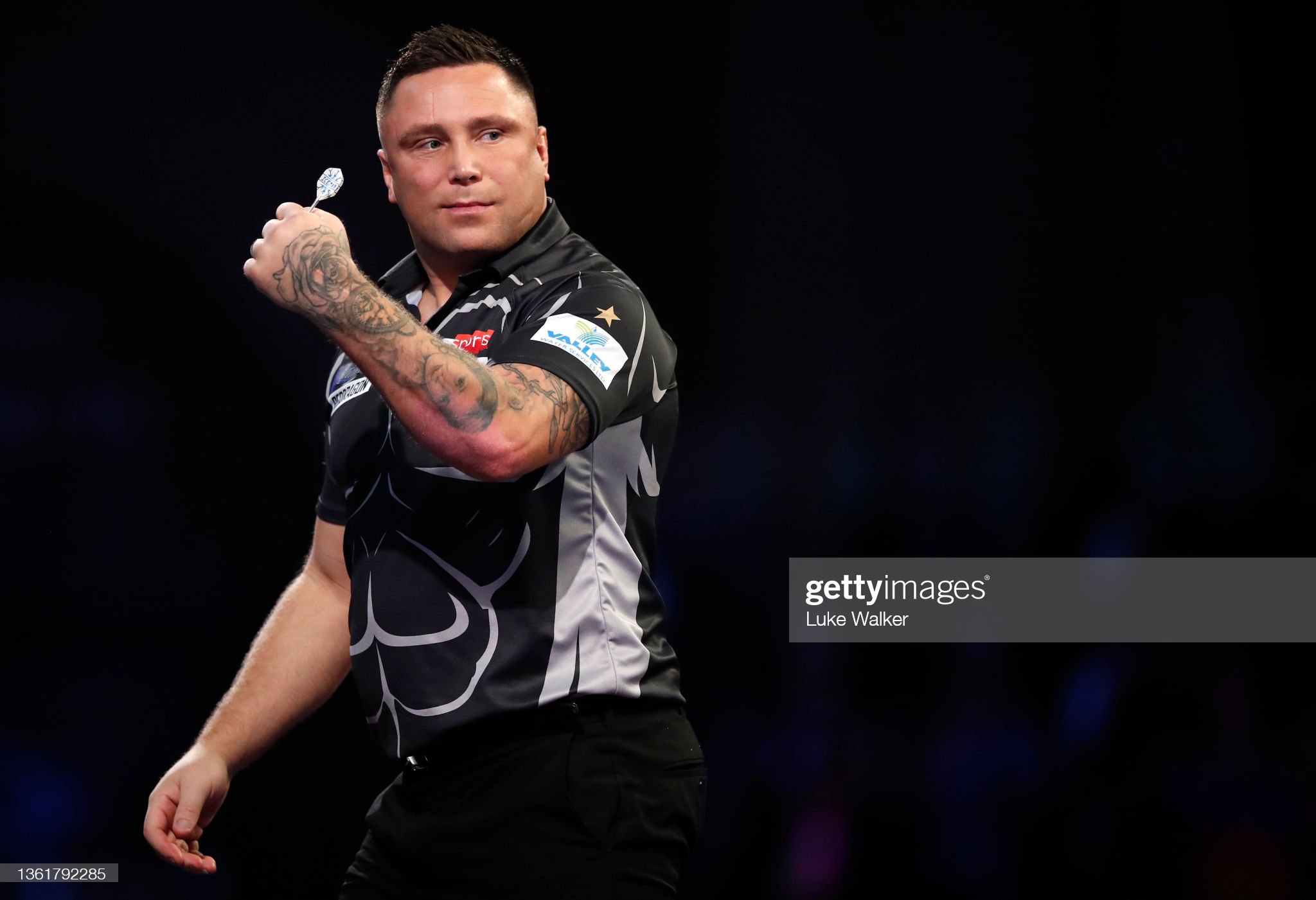 Gerwyn Price has had his share of crowd abuse. Pic: Getty Images.

You know what it’s like. Your team starts poorly, falls behind on the scoreboard, and the fan behind you lets fly with a volley of angry abuse. Fair game for those in the firing line? Not according to Stuart Taylor.

Performers have had their own unique way of dealing with being heckled for years.

For most, it is just an occupational hazard they have to deal with.

“Your bus leaves in 10-minutes . . . be under it” was performance poet John Cooper Clarke’s response to being hackled at a live gig.

Brutal, but effective, shall we say.

When it comes to sport, it seems that some supporters have always felt that it is their right to boo and chant obscenities at those performing in front of them.

Far too many believe that because they have paid their hard-earned money, they must voice their disapproval in response to poor performance.

At the same time, they hold an even firmer conviction that the sportsperson in question is acting unprofessionally if they dare to respond to being berated.

Manchester United legend Eric Cantona took things one kung fu kick too far when he leapt into the crowd and kicked a Crystal Palace fan in the chest after being racially abused as he was making his way off the pitch following a sending off at Selhurst Park in 1995.

The incident made headlines news all over the world and ended with Cantona being banned for nine months by the FA, stripped of the French captaincy, and also handed a two-week prison sentence – which was later reduced to 120-hours of community service.

Cantona admitted last year that as a top-performing sportsman he sometimes felt fragile under pressure.

Retweet if you remember when Eric Cantona kung-fu kicked a fan at Crystal Palace. pic.twitter.com/t17rKQoGCk

The iconic Frenchmen also confessed that even over 25 years later he still had one regret over the incident.

“I have one regret. I would have loved to have kicked him even harder.

“They wanted me to be an example,” said the former footballer turned actor.

And they say time is a healer.

Obviously, kicking a supporter in the chest is not the best course of action in response to any kind of verbal abuse from a supporter, but sports people all reach that point where enough is enough.

Current Wales rugby captain Dan Biggar was recently involved in an altercation with an abusive supporter following his red card for a high tackle on Gloucester’s Chris Harris during Northampton’s 31-21 Challenge Cup defeat.

Biggar found himself subjected to verbal abuse by a fan as he made his way off the field of play.

Stewards felt the need to intervene when the Wales fly-half responded with some verbals of his own.

Thankfully, for all involved, Biggar resisted the temptation to channel his inner Cantona but the flashpoint between player and fan did serve to highlight that sportspeople still have a tipping point when it comes to the pressure valve going haywire.

Saints star Dan Biggar has been hit with a ban after he was sent off at Gloucester last Saturdayhttps://t.co/HGXPNp1VZk pic.twitter.com/gwFSOWs1sC

Former England prop David Flatman was pretty forthright in his defence of Biggar and argued that just being paid to play sport doesn’t mean that professionals haven’t got the right to stand up for themselves.

“Why shouldn’t a player react? I’m glad Dan Biggar stuck up for himself, and I hope the gobs***e who shouted all those awful things at him gets hammered for it,” said Flatman.

No need for any clarification on where Flatman stands on the issue of players being verbally abused by fans, then.

Verbal abuse directed at players is not restricted to just football and rugby players, either, as Welsh darts star Gerwyn Price can testify.

Former rugby player Price is seen as a pantomime villain due to some of his onstage antics during matches.

This has led to him being widely booed by boozed-up fans during his rise to the top of the world rankings.

Researchers at Bangor University in Gwynedd have found that if harnessed in the right way anger can improve a player’s performance. By contrast, happiness doesn’t help as it suggests a player is too content.

Following an epic night in Belfast, @Gezzyprice produced a masterclass with two 9-darters on the new @Winmau Blade 6 dartboard.

We’re now giving you the chance to WIN the PDC @Winmau televised 9-darter board, signed by Gerwyn Price.

Psychologists suggest that those who took part in their study and reacted angrily while performing, saw their overall performance improve by up to 25 per cent.

The research leader Dr Tim Woodman said: “Interestingly, we found that only the performance of people with an extrovert personality benefits from expressing their anger in channelled activities.”

“This may be because they find it easier to express their emotions in public,” he suggested.

Anyone who has watched the self-styled “Iceman” play will have borne witness to the fact that he doesn’t seem to suffer from shyness.

Price’s often over-exuberant celebrations, which sometimes consist of chest-thumping during matches, have led to the boo-boys having a field day.

“It doesn’t bother me at all. Sometimes the crowd is with you, sometimes against you. If it’s against you, you have to feed off that,” said Price.

“When they are against me it makes me play better so next time just boo a bit more,” encouraged Price earlier in his career.

Pressure can eventually get the better of even the seemingly nerveless, though, and Price certainly felt it during his world title quarter-final 5-4 loss to Michael Smith this year.

Having been subjected to constant booing and racist chanting throughout the match, he felt the need to stop mid-throw during the fourth leg of the eighth set to request the removal of a heckler.

The request wasn’t granted and the torrent of abuse at Alexandra Palace continued.

Typically classy stuff from Michael Smith, but have to feel for Gerwyn Price after that today.

Crowd abuse aimed his way is beyond a joke. Today bordered on toxic at times. Horrible to see. pic.twitter.com/XI61PWXyj6

Some would say the chant is just harmless banter, indeed Welsh football supporters often sing the same thing about themselves during matches – an attempt to own the abuse and disarm the abuser.

But when the chant is directed at one individual during a pivotal moment during his career, it is maybe a step too far.

Is it any wonder that Price felt the need to brand sections of the crowd as “cheats” following the world final defeat?

Price obviously felt enough was enough, especially having already called abusive over-the-top fans “pathetic” as they chanted and booed him during a live on-stage TV interview at the World Grand Prix in October.

There is little doubt that Price is a polarizing character but there is no justification for the boringly repetitive abusive behaviour he has been subjected to recently.

It seems that since crowds have been allowed back into sporting events following the global pandemic their behaviour has been over-zealous, to say the least.

Statistics back this up, too.

2/2 “The UK Football Policing Unit’s internal mid-season report has shown a significant rise in football-related criminality compared to pre-pandemic levels. At the CPS, we play a crucial role in tackling these crimes and making our national sport inclusive and safe to watch”. pic.twitter.com/2EPreQXrji

Numbers released by the UK Football Policing Unit prove there has been a dramatic escalation in the number of violence and disorder cases at football matches.

Arrests are up by 47 per cent with the number of reported incidents up 50 per cent.

As supporters, we all experience moments where we get caught up in the moment – be it agony or ecstasy.

Psychologists have suggested that people need to belong to a pack and the support for a team is akin to becoming a part of your tribe.

So, it is only natural that animal instincts kick in from time to time. This, though, may prove to be a shaky case for the defence in a court of law.

The last thing we want is things getting to the stage where we have another full-blown Cantona incident, which might be ten times more explosive in the social media age.

We also don’t want to get to the point where sports men and women are no longer able to perform in front of a crowd.

We all saw what it was like during the pandemic when sports were played with no crowds.

It was simply soulless – a warning that unchecked abuse could deliver a bitter harvest.