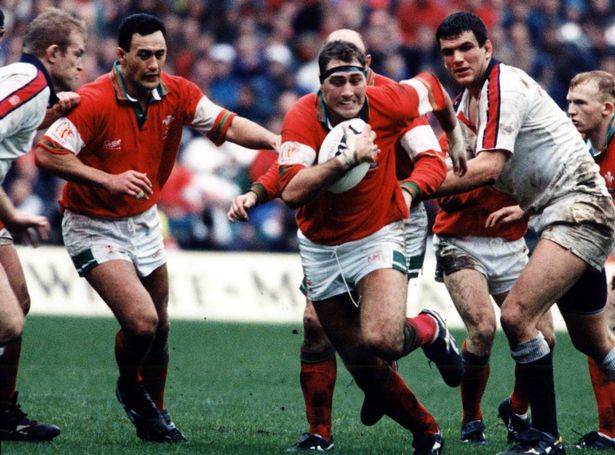 Emyr Leiws in action for Wales against England in 1995.

With the return of live rugby still some way off, S4C  and Clwb Rygbi continue to mine the rich seam of classic games from the past. This evening, they have a belter of a club clash from the early 1990s, a period when Llanelli and Neath were the strongest forces in the land and fierce rivals. Former Scarlets Ieuan Evans and Emyr Lewis recall the famous 1993 Swalec Cup final.

Ieuan Evans: We’d had a special season. We’d beaten Australia and won the league already, and we were going for the hat trick. We’d also won the final the two seasons before too, so we were going for a third on the bounce too. We were a strong cup team. We as a team and the supporters were comfortable with going to Cardiff, to play in front of 50,000 people, we were familiar with it. But the pressure was on us, we were the favourites. Perhaps we were a bit overconfident going into it. Neath would love to spoil the party, they were strong and always physical. There was always a lot going on the pitch against them, and perhaps not the same camera angles as you get these days! They enjoyed being in your face and they were a fit team.

Emyr Lewis: I remember the first one I was a part of in 1987, I was on the bench that day. We were going for a third in a row with Llanelli, which was big. We’d beaten Australia and won the league that season, but we knew it was going to be a tough task against Neath in the final, it always was. There was nothing better than running out on that pitch and for a lot of players, that was the only experience they would get of playing in an international stadium. It was an unforgettable experience. Gareth Jenkins was the coach and Allan Lewis was the backs coach and that combination was great. We tried to speed the game up at every opportunity and they gave the players the freedom to play rugby. And we had the players to play an open game.

We met quite early and went up there on the bus. I remember in one of the first finals I’d played in, when we got on the M4 there were buses and buses and buses of Llanelli supporters going up, and everyone was sounding their horns. It was incredible. It was as if they knew we were going to the final, because they would have had to buy tickets months before we got there. That’s why we were called giants of the cup. I don’t know how, but we were able to play terribly the week before and lose a game, and then come to the final and we’d raise our game again.

IE: It wasn’t always a pretty game against them, but you had to be up for the battle. And it was some battle that day. We went up 12-3 in the game and we felt that we were worth the lead. But Neath came back very strongly.

EL: We took our foot off the gas. Gareth Jenkins told us at half time that we needed to go back out, score first, and keep the pressure on Neath in the second half. That’s more or less what happened.

IE: Neath could have won, maybe they should have won. We went ahead, I scored two tries in the first half, we were 12-3 ahead. The score wasn’t quite what it should have been, and they came back very strongly to tie the game. And then with minutes to go, a drop goal from Emyr Lewis won us the game. A drop goal from a back rower to win the game – it showed what kind of match it was!

I think the experiences and the success we’d had through the season pulled us through. We were familiar with winning, and winning cup finals, and that helps you even though you’re under the pump. When we needed a moment to win the match, we could produce it. Emyr was at the centre of a few important moments in my career – the kick down the field against England (to set up Evans’ try in the 1993 Five Nations), and the drop goal to win the Swalec Cup final. When you’re watching it happen, you’re thinking, ‘no…no….oh great!!’ No one could quite believe what they were watching. But when you’ve got such a talented back row player, with Lyn Jones and Mark Perego, they did things a bit differently, and it was like having extra backs in your team at times, and we needed that.

It was a special season, the style of rugby we played. That’s important to everyone playing in the Llanelli jersey. Gareth Jenkins and Allan Lewis knew what game we needed to play, and to win the league and cup and to beat Australia, playing that style, we all knew we were part of something quite special.

EL: I just don’t know what went through my head. Looking back, it seems bonkers to try it. I’d never done anything like that. Forwards didn’t kick in those days. It just happened in an instant. I hadn’t thought about it, I hadn’t gone back into the pocket. The ball just arrived at my hands and I just dropped the ball to the ground and kicked it, and thank goodness it went over. I remember turning, and Neil Boobyer was running towards me, and he asked me, ‘what on earth did you do?’ It just sailed over, it wasn’t a pretty drop goal, but it was three points. I don’t remember doing it, that’s the problem! It’s brave to do something when you know you’re planning on doing something and you go through with it – well I hadn’t decided to do anything. I’m just trying to think back at why I did it, and I just can’t remember. I’m so grateful it went over, because I would have had a fair bit of stick if it hadn’t! Gareth Jenkins was the first person to come up to me after the game and his words were – more or less, ‘what on earth were you doing and what on earth were you thinking?’ and he gave me a big cwtch and he said ‘fantastic!’.

Neath were not happy. A new rule has been brought in, and they believed that the drop goal should not have been allowed, because the ball came from a free kick. I remember staying there while Brian Williams was being interviewed, and he was furious. It may have been Gareth Charles interviewing him, asking Bryan what he thought of the game, and he said, ‘don’t speak to me, we’re tamping. If we could get a hold of that referee, we’d hang him by his purse on the nearest pole.’ You could see how unhappy they were about that incident.

Re-live the 1993 Swalec Cup final between Llanelli and Neath with S4C’s Clwb Rygbi at 6.15pm on Saturday, or on demand on S4C Clic. English subtitles available.