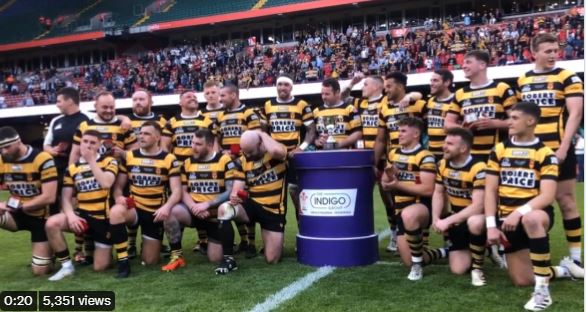 Young gun Will Reed returned from Dragos duty in South Africa to help Newport win the first leg of a potential historic league and cup double this season.

The fly-half helped Newport to a 25-21 cup final win over Aberavon in the Indigo Premiership Cup, kicking 15 points off the tee and then securing the final turnover to win the game for the Black and Ambers.

Reed was returning from the tour to South Africa where he played in the United Rugby Championship and, despite the Dragons’ poor results in the tournament, youngster Reed was determined to help Newport win the Cup.

The occasion marks the first time Newport have won a Cup competition since 2001 and the victors will now be looking for more glory come the end of the season. While the league is not entirely in their hands, they are still very much in contention and will have their chance to make history by winning the double.

A game of two halves but Newport win the cup! 🏆

The game got off to a scrappy start before Newport cantered to a 17-6 lead at half time. But the Wizards started to produce some magic early in the second half to set up a tense final 10 minutes, that had fans on the edge of their seats.

Newport captain Matt O’Brien was on hand to secure the win with a crucial score in the 67th minute, taking his tally to over 1000 points for Newport. Aberavon threatened at the death, but Newport’s defence prevailed following what was a titanic effort in defence.

Reed explained how playing out in South Africa has helped him on Newport’s journey to becoming Indigo Premiership Cup Champions:

“It was an amazing experience playing with the Dragons and being out in South Africa. When you are out there, you can see the very best quality at club level and what it’s like to play in that environment.

Your City, Your Colours, Your Club, Your CHAMPIONS🏆

“I did learn an awful lot, but coming back here this season, where I have loved every minute of playing for Newport, it was important for me to put my little part into such a special day for the club. It’s something I really wanted to do, and I’m really happy I helped do that today.”

It’s clear that Newport holds a special place in Reed’s heart and that their victory today was hard fought.

“I’m over the moon! It was a brilliant day and I’m so happy we got the win at the end of it. We made it difficult for ourselves towards the end and we had to dig deep to get the win against Aberavon,” Reed said.

Newport beat Aberavon 25-21 in the the last of three tight games at the Principality Stadium for the National Club Finals Day today. Trebanos overcame Bedwas late on in the first game, winning the Championship Plate Final 23-21, while Neath took down Bargoed in the later stages of the Championship Cup final, winning 16-13.

A 6,172 strong crowd was out in force at Principality Stadium celebrating from the stands.

Speaking on the electric atmosphere that took hold of the Principality today, Reed said: “The stadium is unbelievable. It was so special to play out here today for Newport.

“When I look back and reflect on it, it will be even more special.”

Although Newport’s league chances rest on Cardiff dropping points against Merthyr, Reed is buoyed by the possibility of a league double:

“It would be something special for the club. The team deserves it following the season we’ve had… I’m sure what will be will be.”