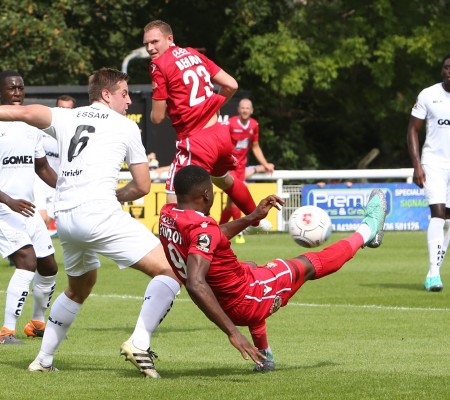 Mike Fondop insists Wrexham are more than capable of winning the Vanarama National Conference this season and returning to the Football League.

The Dragons are right in the promotion mix and play Hartlepool at the Racecourse on Tuesday evening (7.45pm).

Striker Fondop says: “I know we have a chance to finish top with all the talent we have in this squad.

“We have to maintain that consistency and I believe we will.”

Wrexham would have gone top with a win at Chesterfield, but they drew 1-1 and are third, one point behind leaders Leyton Orient.

Fondop scored five goals in his first six competitive games for Wrexham, but the 24-year-old has not scored since.

The 24-year-old has been backed by manager Sam Ricketts and says: “My responsibility is to score goals as a striker, but strikers go through drought periods.

“It’s what you do when you go through these periods that matters. Are you helpful to the team? Do you contribute a lot, defensively and offensively?

“In terms of goals you have to be patient. I’m relaxed. When I was scoring goals, I wasn’t thinking about them.

“Confidence is high. It’s all about confidence.

“We are a good bunch of lads, training hard and we have a togetherness.”

Manager Ricketts confirmed Luke Summerfield is back running again after his injury setback, while Mark Carrington will be assessed after picking up a knock on his ankle.

Wrexham fans were in superb voice at Chesterfield during the 1-1 draw in Derbyshire, out singing home supporters with their rendition pop Sweet Caroline by Neil Diamond, while their Mae Hen Wlad Fy Nhadau offering during the second half was magnificent.

Ricketts’ men follow the draw at Chesterfield with back-to-back home fixtures against Hartlepool on Tuesday and Gateshead on Saturday.

Worgan has played nearly 300 times for the Stones in five seasons and Maidstone chief executive Bill Williams says: “Lee has been a wonderful servant of the club.

“He has played a massive role in getting us to the level of football we’re at and given many hours of pleasure to our supporters over the past five or so years.

“Because of that loyal service, the club have reluctantly agreed to release him.

“The offer he’s had to join Dover’s management team provides security for his family as they prepare for the arrival of their first child and he was adamant he wanted start a new life in a coaching capacity.

“He leaves with our blessing, best wishes, and remains a good friend of the club.”