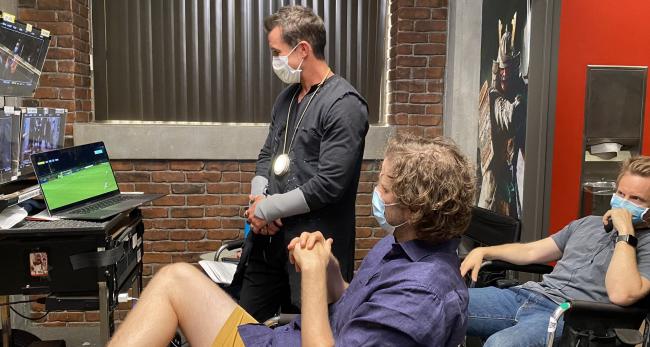 Hollywood actor Rob McElhenney, is urging American Football fans in the USA to throw their support behind  Wrexham.

McElhenney, along with Deadpool star Ryan Reynolds, are the men behind a proposed Wrexham FC takeover bid and he tweeted after the Dragons’ lost 1-0 at Solihull Moors in the National League.

“To all of you who are already finished with American Football for the season, may I suggest European Football? Don’t worry. It’s just as heartbreaking.
@Wrexham_AFC,” said tweeted.

McElhenney watched Wrexham’s match at Solihull at his home in America via a live stream on a frustrating night for the Dragons.

Manager Dean Keates is urging his players to find a ruthless edge to fire up a National League promotion challenge.

“Football is the two 18-yard boxes and we have to learn how ruthless you need to be, but character wise they gave everything.

“Our game plan worked to a tee and we dominated long periods of the game.

“We had sustained periods of pressure, produced some great approach play, crossed numerous balls into box and hit underside of crossbar.

“There was also a blatant penalty when their kid cleared a ball with his arm. The kid said himself that his arm was above his head and the ball hit his arm.

“We created enough chances to say that we should have scored. We cant be relying on referees that don’t give you anything.”

Monday’s match against Maidenhead will be shown live on television (7.45pm).

Wrexham-born midfield player Jordan Davies, playing a holding role in front of their back four, accepted responsibility for James Bell’s 56th minute winning goal, saying: “I was excited for my debut, but it’s hard when you don’t come away with a win.

“At one set piece I lost my man at a corner and he flicked the ball in. Harsh as it sounds, I have to take that on the chin and now make sure my man doesn’t score again.

“When you look at the team performance it was good. If we play like that consistently we will win more than we lose.”

Davies, a 22-year-old from Coedpoeth, Wrexham, was a product of the club’s Youth Academy before making the move to Championship club Brighton, but now he is back in North Wales.

“Jordan is an extremely good player, he has a football brain,” said Manager Keates.

“When we spoke in our changing room afterwards the lad held his hand up. He lost his man and will learn from that. Solihull scored from that and it was the only chance they had.”

Keates is relaxed about preparing for Wrexham’s two fixtures in three days – at Yeovil on Saturday and at home against Maidenhead on Monday.

“We have almost two teams of players who can come out,” he said. “We can rotate and keep players fresh.”