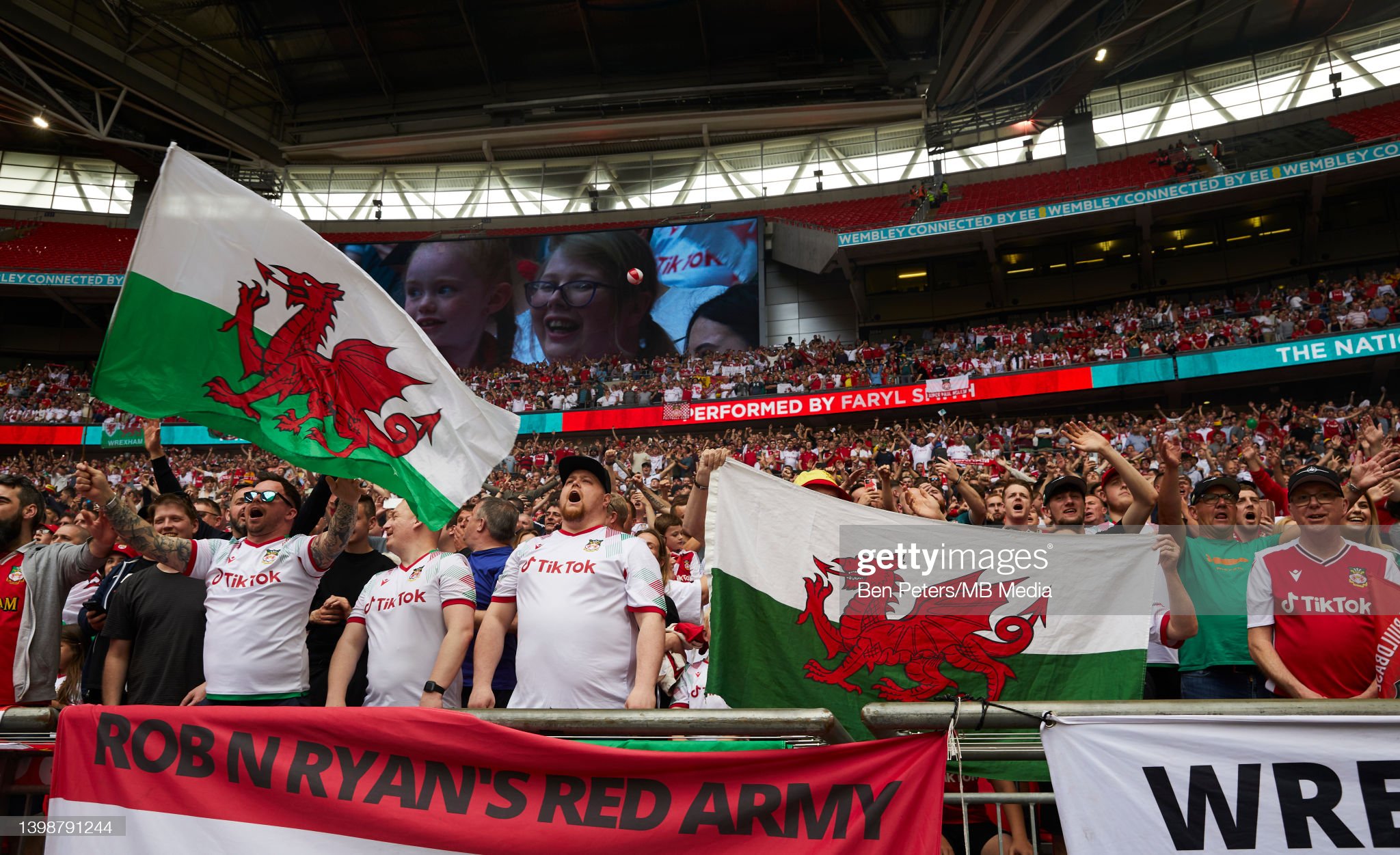 Wrexham will have to gain promotion the hard way. Pic: Getty Images

Like all good Hollywood-backed scripts, there have been some surprising twists in what many hope will be a blockbuster season for Wrexham AFC.

There have been trials and tribulations, heartwarming moments, tears, laughs and suspense like all good movies have.

It started with a blaze of publicity when Hollywood A-listers Reynolds and McElhenny decided to invest £2 million to gain full control of Wrexham AFC from the North Wales clubs’ supporters’ trust in February 2021, having bought majority shares in the club in November 2020.

Then came the TV adverts, which were to put little Wexham on the lips of every soccer fan in the US, a shirt sponsorship deal with global phenomenon TikTok, there is also a spin-off documentary planned called Welcome to Wrexham, which Disney+ will show later this year.

Ahead of this season, a huge Hollywood-style Wrexham sign was erected on the slag heap at Bersham Bank colliery tip, near Rhostyllen. Despite the club insisting the sign had nothing to do with their owners, the mystery brought more publicity to the area.

Can I round out this 5-a-side team? @VancityReynolds pic.twitter.com/UQTEoIyukw

On the pitch, things were going well in the likeable Hollywood duo’s first full season of ownership under the onfield direction of experienced manager Phil Parkinson.

Automatic promotion was in sight following Wrexham’s emphatic 3-0 victory over leaders Stockport. The win prompted the club’s owners to buy an advert in The Leader, the local newspaper.

In the advert, the duo wrote: “Why Wrexham? It’s the question we’ve gotten more than any other.

“We’re writing this advert after our incredible 3-0 win against Stockport County. The Leader requires we submit by May 11. Thus, we have no idea what will have happened by the time you read this.

“Yet whether it’s win, lose or draw, if it’s promotion or play-off, one question has been resoundingly answered.

“Why Wrexham? Because you deserve it. For 158 years of fearless devotion. For building a club and a community, the world should know about weathering storms that would have broken lesser towns.

They're really getting into the spirit of it. Listen to the @Wrexham_AFC fans singing Yma o Hyd ahead of the @FA vase final. Still 3 hours to kick off 🍻 pic.twitter.com/xJ7X9dWEBS

“For your cheers, your courage, your traditions, your warmth. And because a little over a year ago, you took a chance on two Hollywood jokers who knew precious little about Wales or football.

“Thank you, Wrexham. Our first full season has ended. Bring on the next 158.”

All heartwarming stuff, but unfortunately, the season hadn’t ended thanks to a 3-0 loss away to Dagenham and Redbridge. However, Stockport’s 2-0 victory at home to Halifax was enough to crown them champions.

After the loss, co-owners Reynolds and McElhenny took to Twitter to rally the troops.

“What a season for Wrexham. We’re gonna have to do this the hard way. Our supporters are second to none and a big part of our success, “wrote Ryan Reynolds.

“I want to congratulate Stockport County on their promotion. Played their guts out all year,” he added.

One of the proudest moments of my life. Singing that at Wembley with 25,000 Wrexham fans. Goosebumps. ❤️🏴󠁧󠁢󠁷󠁬󠁳󠁿 https://t.co/B3Cv06yd5U

Co-owner Rob McElhenney wrote: “Guess we wanna do it the hard way. We’ve had an incredible season so far. Let’s dust off and go finish it!”

There was little time to wallow in self-pity as Wrexham had a FA Trophy final at Wembley against Bromley to concentrate their minds.

Things got off to a somewhat comical, if predictable, start before a ball was kicked at Wembley when Tory MP for Wrexham Sarah Atherton took it upon herself to wish the team good luck ahead of their Wembley final in a speech in the House of Commons.

People were only too keen to point out the MP’s mistake as WrexhamAthletic trended on Twitter, with one user tweeting:  @WrexhamAthletic – what an amazing team! But with just one fan.

Such was the mocking that Athletic superfan Ms Atherton felt compelled to explain her gaff. But, unfortunately, describing her renaming as a slip of the tongue due to working for 15 hours that day did little to endure herself to many.

However, the mood ahead of the FA Trophy final was jubilant, with Wrexham having been awarded City status to mark the Queen’s Platinum Jubilee.

While the scenes in the private box looked to be going according to the script, on the pitch, Phil Parkinson’s team went 1-0 down to a goal by Bromley’s Michael Cheek in the 64th minute. However, still losing Wrexham’s substitute, Jake Hyde looked to have provided the Hollywood ending with an equalising header in injury time.

Hyde’s effort sparked wild celebrations among the A-Listers in the private box. There was plenty of whooping and hugging, even long after the goal had been ruled out for offside.

The co-owners still looked perplexed as to why the goal had not been awarded when they realised Wrexham fans were not celebrating with them. Still looking bewildered, the American duo heard the final whistle to confirm a 1-0 defeat.

Like in all good Hollywood scrips, the leading men, in this case, Reynolds and McElhenny, were in the locker room offering inspiring words of encouragement to their crestfallen heroes ahead of their play-off semi-final clash with Grimsby on Saturday.

I mean… what a totally normal Wrexham AFC picture 🤩 pic.twitter.com/09QHUEJIlb

“From day one, there has been a real focus, the FA Trophy was always a bonus for us, and we need to be ready and focussed on Saturday and give everything we have got to get into the play-off final,” said manager Parkinson.

“It’s the owners’ first full season, and the nature of the industry is it can’t all go your own way. So they’re disappointed but credit to them because they’ve been great with the lads and myself,” he added.

Wexham seeks to return to the football league, having been there for 80-years before they were relegated in 2008.

Victory against Grimsby on Saturday would see Wrexham travel to the City of London Stadium on June 5, the same day Wales could win its play-off final in Cardiff to book a place at the World Cup finals since 1958.

Is it written in the script that June 5, 2022, goes down in Welsh national footballing folklore as the day Wrexham and Wales served up a double tonic?

Only time will tell. However, many fans would be more than happy to take the double tonic – no need for the ice or the gin; the double wins will do.