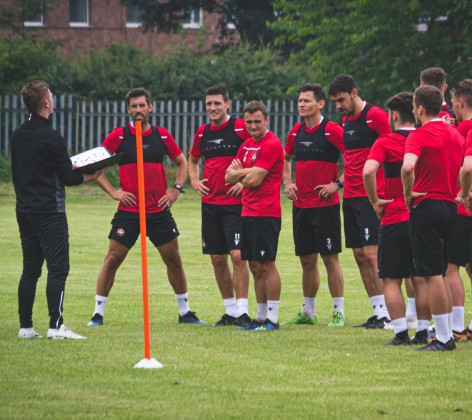 Yorkshire Jake Lawlor believes the belief among Wrexham players ahead of their opening 2019-20 fixture is infectious.

The Dragons are at home against Barrow in their first Vanarama National League match and Lawlor, a midfield player or defender, says: “The gaffer (Bryan Hughes) has brought in new players and the idea is that they are better than what we had last season.

“Everybody in the changing room believes we can do earn promotion.

“The lads that have come in are different to what we had before. They bring something different and they all look quick and sharp in training. They are banging goals in for fun in training.”

Manager Hughes has no doubts, saying: “Our objective this year is to win the league. We can’t look any lower than that.

“There will be ups and downs, but it is about how quickly we recover. That is important.

“There are loads of factors that will go on throughout the season, our home form has been good here last season, hopefully it will continue this season.

“Our away form was a little bit edgy at times, so that is somewhere we need to get better and improve. It is about putting the foundations in place, instilling in these players that mentality of we are going to win the league, but also instilling into them that whatever happens on a Saturday, if we win, lose or draw, we always have the next game to recover.

“Huddersfield-born Lawlor, who joined Wrexham from Salford almost a year ago, missed the end of the season after suffering a dislocated shoulder in the 3-1 home win against Braintree, but Is now fully fit.

And the centre-back insists confidence his high in the Wrexham dressing room ahead of the new season, with the players determined to utilise home advantage – and the backing of a big crowd – on the opening day.

“Barrow were good at the back end of the season,” said Lawlor. “They beat us 3-1 at the Racecourse, so we owe them one.

“It’s always tough going to Barrow, but at home – on a big pitch – we are confident of beating them.

“Just being at our stadium and seeing the fans with Wrexham shirts is a great help to the lads. With several thousand backing us, it’s great.

“When there are that many people here supporting us you don’t want to disappoint them – it gives you a boost.

“They are that loud and you just want to do it for them.”

Lawlor’s role may change slightly this season, meanwhile, with manager Hughes having trialled a number of different formations throughout the summer.

“It’s good to have a back-up plan, and it’s good that the teams we are playing won’t know what system we are playing,” he said. “We can easily go to a three at the back or four, so it’s all positive.

“I defend a little wider in the three than in the four, and I’ve played predominantly in a back four throughout my career, so it’s just getting used to that slightly different position.

“There are pros and cons to it. You can get your wing-back higher, but then I might have to come a little bit wider [to defend].”

Skipper Shaun Pearson will lead the side out, while Mark Carrington, the club’s longest-serving player, is starting his seventh season at the club.

Wrexham goalkeeper Rob Lainton is out injured with an ankle injury and Christian Dibble will start, while Akil Wright has returned from his illness and trained this week.