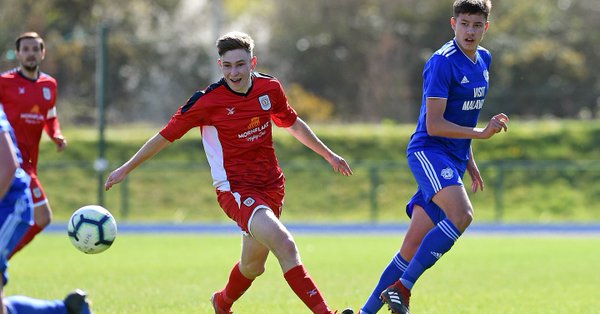 Action: Cardiff City (blue) v Crewe in an under-23 clash.

The young Bluebirds suffered a first defeat in five Professional Development under-23 League fixtures when they were beaten 3-1 by a strong Crewe Alexandra side.

All three Alex goals at Cardiff International Sports Campus were scored within the opening 10 minutes of the game.

Senior midfield player Stuart O’Keefe continued his regular run of appearances as an over-age player at under-23 level.

O’Keefe scored Cardiff’s goal from a penalty after 27 minutes, while the home team had Laurence Wotton sent off after 75 minutes.

The Bluebirds began brightly and almost took the lead inside the first 60 seconds.

Crewe took the lead with their first effort on goal. The experienced Alex Nicholls fired low into the bottom left corner from 10 yards after five minutes.

They added a second with 10 minutes gone when striker Connor Heath tapped home from a rebound to double the lead before striking from range to make it 3-0.

That scoreline did not reflect a hard fought, evenly-contested match and O’Keefe scored for Cardiff after Kieron Evans was brought down inside the penalty area. He fired into the top left corner.

Heath almost completed his hat-trick before half-time, but was denied by Bluebirds goalkeeper Warren Burwood’s outstanding save.

The Bluebirds dominated possession in the second half and almost pulled another goal back shortly after the hour mark. An O’Keefe shot was blocked and substitute Siyabonga Ligendza saw his curled attempt deflect wide from close range.

Siyabonga Ligendza also forced Crewe’s Will Jaaskelainen into a fine save in the last minute.

Wootton was sent off after being booked for a second time and Crewe held on to take all three points.

Harvey’s team will look to bounce back when they face Watford at Maurice Rebak Stadium their next under-23 encounter on Friday, March 29 (3pm).