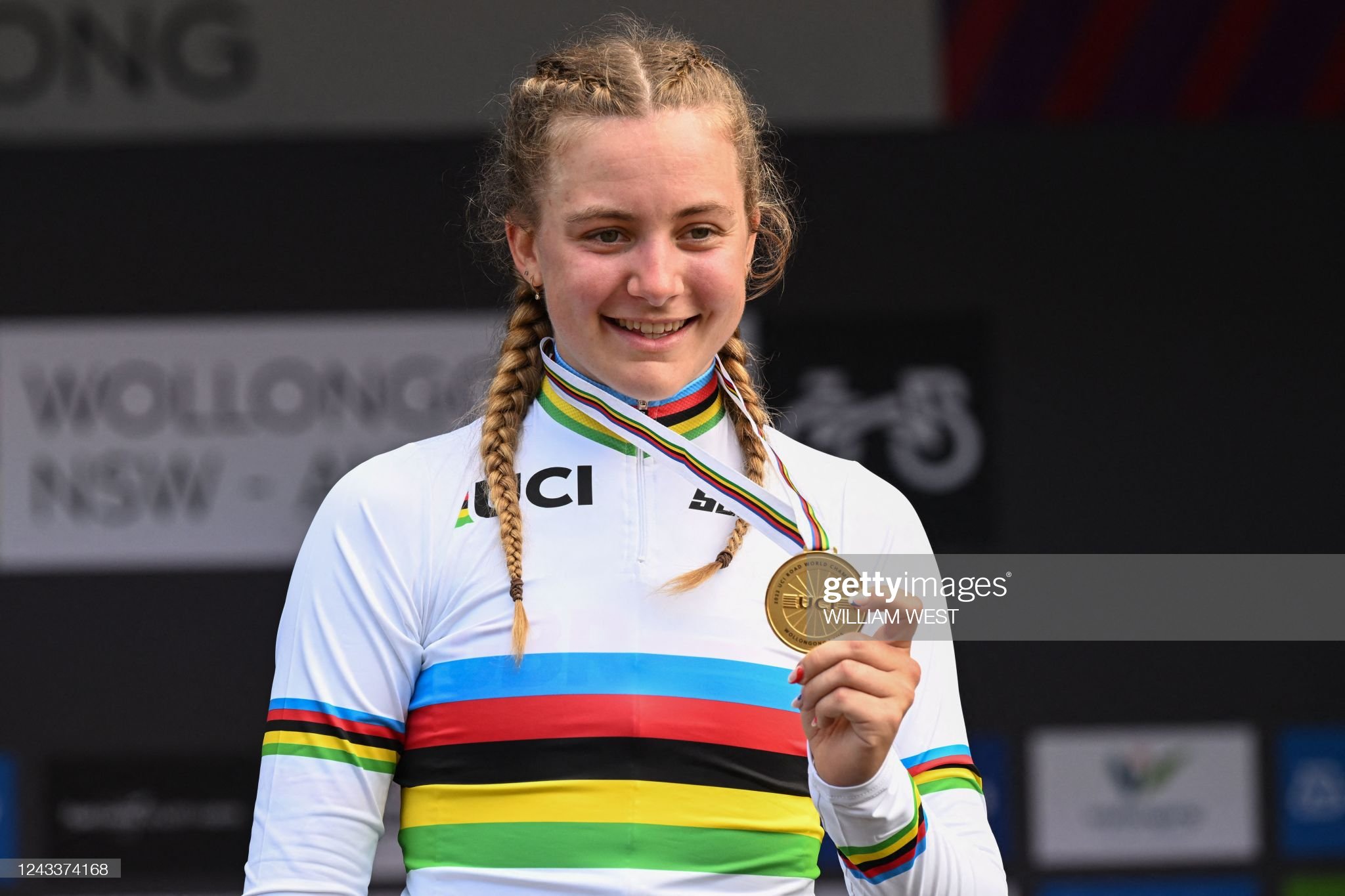 Zoe Backstedt insisted she felt no pressure after she became the junior women’s time trial world champion in Australia after a magnificent day for Welsh cycling during which Josh Tarling also struck gold.

The Welsh teenagers both won gold for Great Britain in Wollongong to underline their huge potential.

Backstedt completed the 14.1km course in a blistering time of 18:26.78, a full 1:35.58 minutes ahead of the silver medal winner, Germany’s Justyna Czapla.

Later in the day in New South Wales, 18-year-old Tarling made it a memorable day for Welsh sport when he also became world champion with gold in the junior men’s time trial.

Riding last in the competition, Tarling – who recently signed professionally for Ineos Grenadiers – beat home favourite, Australian Hamish McKenzie  by 19 seconds to win in a time of 34:59.26 over the 28.8km course.

After her momentous win, Backstedt said: “It feels incredible.

“I really wanted this one, it means a lot. I’ve got one track, the road, I’ve got cyclo-cross and now I’ve got TT (world championship titles). I’m so happy I could pull it off.

“Out on the course my legs were hurting, but that was a good thing because I knew I was going hard and going strong, just trying to hold my power.

“If I’m honest, there’s no pressure. I’m young and don’t need pressure put on me. If I do, then It’s not a good thing to have in your mind.

“Before the race I just tried to relax out in the sun. Every race I go into, there’s no pressure. If you mess up, you mess up but if you do well then even better. It’s just all about enjoying it.”

The 17-year-old – younger sister of Elynor Backstedt, who is also rides professionally – will now go for the defence of her junior road race title which she won at the 2021 championships.

She added: “It’s going to be a tough one but I’m looking forward to it.

“Now I know what the course is like under a full gas effort, obviously we have a couple more climbs, but it’s going to be interesting and fun and very early in the morning!

“From the time trial course, I think the road course suits me, but there’s some steeper climbs put in for the road race.

“It’s a little longer, there’s some more corners, so anything could happen on the day as well.”

After his onw triumph, Tarling said:  “It definitely hasn’t sunk in yet.

“It feels like a relief. So much hard work, I was a bit annoyed after last year. I really wanted it, and relief maybe.

“The first lap was important because it felt like it was all uphill, especially with the headwind.

“I was just trying to sit as hard as I could over that first climb, and then it was pretty much downhill with a tailwind to the finish.

“Then I think I was hurting anyway, but when I saw Jens Verbrugghe I eased off a bit, as I thought I was going ok. I think I eased off a bit too much, so I had to kick through the last few sections. It was mainly thinking about the corners.”

Asked how this season has been, Tarling said it was “so hard”.

“I think I had a bad start to the season with injuries and feeling empty. From halfway through the year it has been all for this,” he explained.

They both takein the junior ITT!

“I had a bit of food poisoning during the Euros, and I was annoyed I couldn’t help my team in the team pursuit, and they deserved it. After that it was flat out to try and bring GB another jersey to make up for it.

“It’s awesome, the coaches really deserve it. We’re really proud. After the road race, I’m going to try and get another result in that.”

Tarling will compete in the junior road race on Saturday.