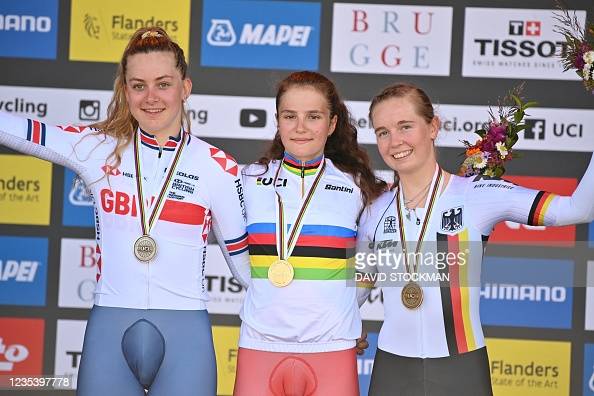 Zoe Backstedt powered to ITT silver on her World Championships debut in Flanders – as father Magnus provided the commentary.

The 16-year-old was just edged out of junior women’s gold in Bruges as she kept the family name on the podium.

A Backstedt has been on the TT podium at every champs since 2018 with older sister Elynor having taken two bronzes in a row.

“She still one-ups me on that,” the Pontyclun cycling prospect said of the sisterly rivalry.

“She has all the experience so I can ask her all the things like how hard to go down the start ramp and in the first few metres how much you commit, it’s been really nice to see her. I wish she was racing but she’ll be back on the bike soon.

Backstedt was in the hot seat in Bruges after setting the fastest time over the 19.4km course from Knokke.

But Russia’s Alena Ivanchenko – the only woman who could deny her the gold – eventually took the title by the slender margin of just 10.64 seconds.

“I’m happy with it,” Backstedt added. “Obviously disappointed that I didn’t get the win, that’s what I came for, that’s what everyone comes her for.

“But for my first World Champs and still being 16 I’ve got to be very happy with a silver medal.”

It was an emotional time for dad Magnus, a stage winner on the Tour de France who was providing commentary on Eurosport – as the Russian went through the time check just a couple of seconds quicker.

“I don’t think I’ve ever been that nervous, especially when we saw the intermediate times,” said Backstedt as he watched his daughter compete.

Zoe, who will now compete in the road race on Thursday, said: “I didn’t hear him at all, I had some messages from him this morning saying good luck, that really helped, it would have been nice to see him at the finish.”