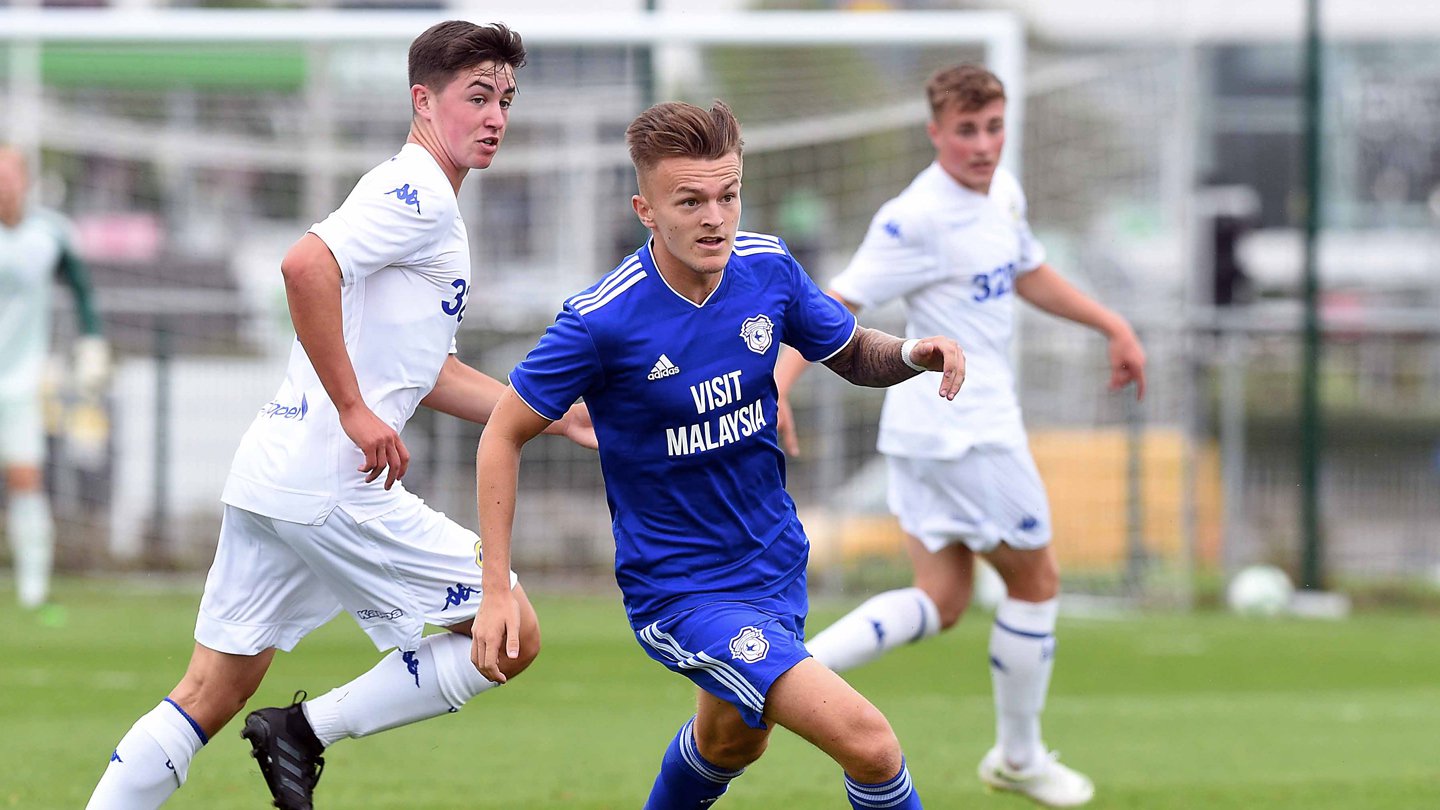 Creative midfield player Laurence Wootton was man of the match for Cardiff City in their 2-1 Professional Under-23 Development League defeat against Leeds United at Cardiff International Sports Campus.

Wootton, signed from Stoke City’s Academy two years ago, is highly rated by Bluebirds’ staff and under-23 coach Jarred Harvey said: “Laurence was excellent. In the first-half, his positioning and the way he played was really good. He’s had to wait for his opportunity, but he’s come in and done really well.

“He was probably my man of the match, but I was also impressed with Daniel Martin.”

Tomlin fired Cardiff in front when he scored from a free-kick just outside the penalty area. He swept the shot around the wall and into the bottom left-hand corner after 43 minutes.

Jack Clarke equalised with 49 minutes gone, netting from a free-kick in a similar position to Tomlin’s goal.

City thought they’d regained their lead only to be denied by an offside flag after 64 minutes. Mo Asiri’s spectacular overhead kick was kept out before Connolly finished and the referee disallowed the effort.

The Bluebirds looked determined and almost took a one-goal advantage four minutes later. Tomlin fired across goal from the right and Paul McKay met it first time only for goalkeeper Kamil Miazek saved.

The match was decided by a penalty awarded for a foul after 74 minutes. Clarke scored from the spot and earned victory for Leeds in a hard-fought clash.

“Lee Tomlin and Matthew Connolly were influential for our younger players,” said Harvey. “Tyrone Duffus is on a limited amount of minutes and still about a week away and we didn’t risk him from the bench.

“Hopefully, he’ll complete a full week of training and we should have him playing next week. The same goes for Lloyd Humphries and James Waite. Ibrahim Meite will be up to more minutes now as well, so we’re getting closer to having a full squad and that can only be beneficial.”

Influential midfield player Jamie Veale said: “There are plenty of positives to take from the game. We had a couple of chances to go 2-1 and against good teams like Leeds, if you don’t take your chances, they will come back and make you pay.

“Playing beside Lee Tomlin and Matthew Connolly is always great. They are brilliant to look up to for us younger boys,  they’re always supportive with whatever we’re trying to do and it’s great for me to have Tomlin there, as a midfield player.

“It’s great to see what he can do and learn from it.

“Personally, it’s just great to be back on the pitch after a couple of injuries last season. Minor setbacks mean major comebacks. It’s great to be out there again and I’m loving every minute of it. Long may it continue.”

The next match for Cardiff’s under-23 team is at Nottingham Forest next Monday, September 10 (7pm), while they travel to Coventry City on Friday, September 14 (1pm).

Their next home fixture is against Millwall at Cardiff International Sports Campus on Monday, September 24 (2pm).