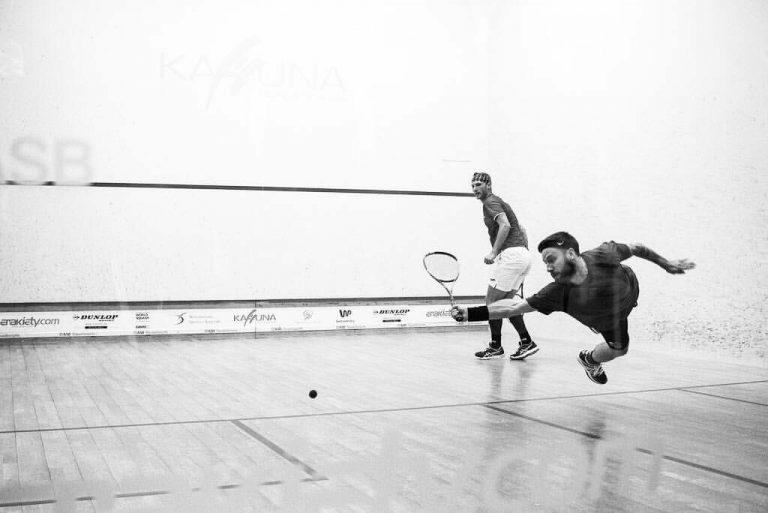 Welshman Peter Creed is aiming for home club glory in the third annual Welsh Professional Squash Open during May.

Caerphilly-born Creed, ranked at 55 in the World men’s list, is number one seed for the 2019 event at his own club, Rhiwbina SRC in Cardiff.

Former Welsh Open champion George Parker, who is one place behind Creed in the rankings, is number two seed ahead of Richie Fallows (London, WR 62) and American Chris Hanson (New York, 68).

Squash is booming in Wales with Joel Makin, from Pembrokeshire, at a career-high 15 in the World and Rhyl-based Tesni Evans, the British Champion, at number nine in the women’s list.

Wizards finished a highly creditable third in the South Division and are intent on winning the title next season.

Most of the professional players competing at the Rhiwbina Welsh Open are ranked inside the World’s leading 100 men and Richard Murphy, the host club’s chairman, says: “In the first two years of this event there has been some weather and red hot World class squash in Cardiff.”

Big-hitting qualifier Parker, who plays out of the West Warwicks Club in the English midlands, won the Welsh Open title in straight games at Rhiwbina SRC two years ago, dropping only two games in four matches.

He defeated top seed Joshua Masters 3-0 in the last four and teenager Patrick Rooney, the eighth seed, in the final.

England’s Fallows won the 2018 Welsh title, beating Creed in the final. A packed attendance behind the glass-back courts at Rhiwbina SRC watched Fallows, then aged 22, win the final in straight games.

Fallows, ranked 60 in the World, looked the sharper and fresher player with Creed looked drained after competing in the European Championships, Commonwealth Games and the Open.

Creed plays out of the Rhiwbina club and club official Richard Murphy said after the final: “Peter gave everything he had, but it was obvious from the start that, despite his efforts, there was very little left in the tank from previous weeks.

“He remains a true legend at Rhiwbina.

“Richie did what he had to do and claimed his second World ranking title. His variety of play across the court was immaculate as was his show of humility after the match had finished.

“Richie was a credit to himself and his family throughout the week.

“It will be great to welcome him back to Cardiff as defending Welsh Open champion in 2019.”

Only £10 entry or £15 with an exclusive gift!
Mixed singles events – A, B, C & D
Entry closes 19th April 2019
Visit our website for entry form: https://t.co/J62UKZRRod pic.twitter.com/aYCAIIwWMO

Squash Wales pay tribute to one of their own later this month.

Ross Scaccia, a leading member of the St Mellons and Llanishen clubs, passed away aged 66 in December, 2017 and a tournament was organised in his memory last year.

Welsh squash official Byron Lloyd Lewis was close to Ross and says: “He was a friend of mine and a friend of squash. I introduced him to team squash.

“Ross and Dave Williams, the ex-South Glamorgan President, asked me to form a team together at Llanishen.

“This was the start of the modern day Llanishen teams and it has developed into a highly successful club, mostly down to Ross and Dave’s efforts.

“Ross was also heavily involved in St Mellons squash would always try and support me in any event that I tried to organise.

“In my eyes and in his own way he was a legend of squash. He use to call me ‘mother’. This was because when I started the squash team with him I was the only person who had team experience, so I use to be a bit bossy to the other players and look after them.

“They would say I was like a mother to them.

“Ross was affectionately known as ‘Barbie’ to his friends. This name was given to him because of his frequent barbeques. He invited my wife and I to some of them.

“My wife and I are vegetarians and he would say ‘I’ll be cooking some cardboard for you both then’ – meaning Quorn fillets.

“I also remember once when I went there that he counted how many profiteroles I had eaten. I know I have a sweet tooth, but he told me at the end of the evening that I had eaten 42 and that it was a South Glam record. I still think I hold it to this day.

“Fond memories of a great guy.”

Mixed singles events: A, B, C and D. The finals, followed by presentations and buffet, will be at St Mellons on Sunday, April 28.

There were four sections in the Scaccia tournament and the player with the biggest winning margin in their final was declared overall winner.

“Anybody in the tournament could have won overall,” said organiser Stuart D’ivry. “It went to the player who won their final with the biggest points differential.”

“The reason for deciding the main winner in that way was because Ross was a strong believer in promoting up and coming squash players and not just looking after the elite.”

The first event, held last year, was won by Scotland’s Lisa Aitken, the number one seed who won against English qualifier Lucy Beecroft (England) 11-7, 11-1, 11-4 in the final.

Dundee-born Aitken’s success in  North Wales was her third PSA World Tour title since returning to action in 2017 following illness.

After winning the $5k Bangor title, World number 65 Aitken said: “The most satisfying part of the event in Wales was dealing with being top seed.

“All these players are really good on their day and coping with the expectation almost felt more satisfying than winning a third PSA title.”