Canadian defenceman Mark Louis has committed to Cardiff Devils for 2019-20.

The man from Ponoka, Alberta has won seven in three…"> Canadian defenceman Mark Louis has committed to Cardiff Devils for 2019-20.

The man from Ponoka, Alberta has won seven in three…" /> 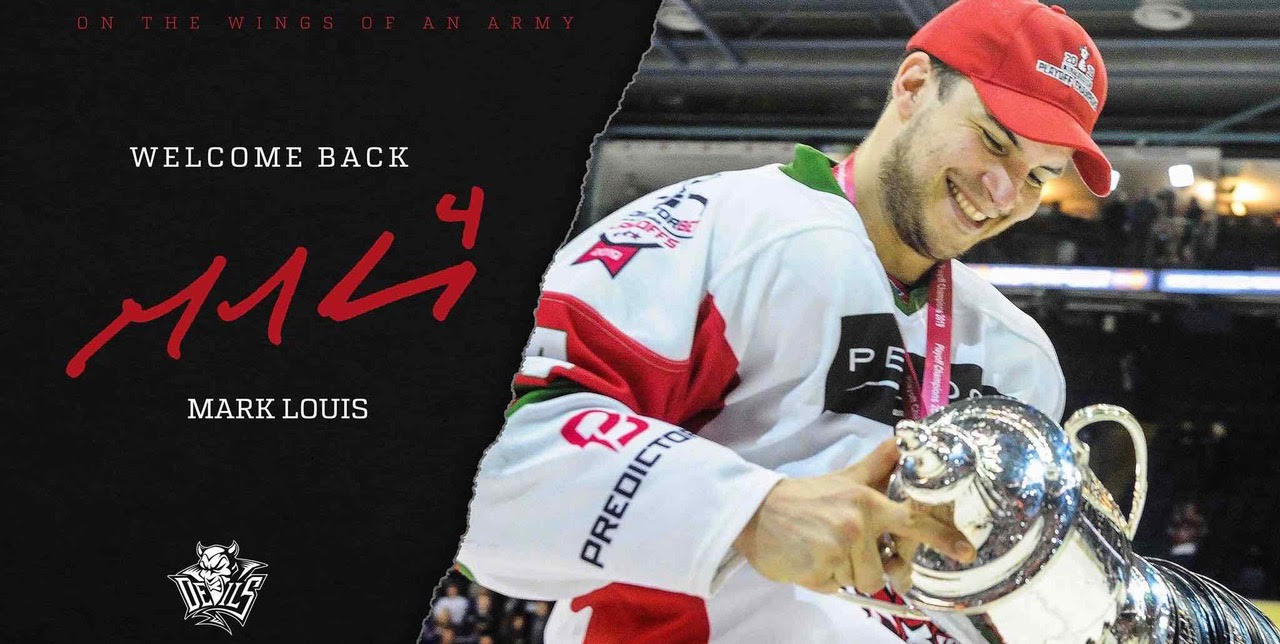 Canadian defenceman Mark Louis has committed to Cardiff Devils for 2019-20.

The man from Ponoka, Alberta has won seven in three seasons playing for Devils – Elite League title, Challenge Cup and Conference title in 2016-17 followed by a league and play-offs double in 2017-18.

He lifted the playoff championship for the second year in a row last month – and was named coaches player of the year by Andrew Lord.

“I’m delighted to be back with Devils,” says Louis. “After my difficult year with injury in 2017-18, I had a fun time on the ice and played in every game last season.

“I love Cardiff and feel at home here – I love the fans and I love this club.

“It’s a great organisation to be part of and we’ve been fortunate to win a lot in my time here. I’m a competitive guy so I’d like to keep winning and this is the best place to do that.”

Head coach Lord talked about his delight to re-sign the 6ft 4ins D-man, saying: “Mark is a heart and soul kind of player who plays with real character and gives it his all every time he steps onto the ice.

“He is a big body out there, but he skates so well. That is what attracted us to him in the first place.

“When a guy is that big skates that well he is tough to slow down. He can break the play out and knows when he can join the rush.

“He also has the speed to get back into position.

“Mark is a total work horse and a fantastic teammate. It’s so important to have a guy like Lou in our line-up, because we know he will stand up for his teammates and drop the gloves if he needs to.”

The 32-year-old Canadian spent four years playing for Portland Pirates in the American League and one season in East Coast hockey with the Orlando Solar Bears before joining the Devils in 2016.

He played 174 AHL games for the Pirates, who are the top affiliate of NHL club Arizona Coyotes.

Devils will host three different European opponents in pre-season action as they build towards the start of the Champions Hockey League at the end of August.

They finished just ahead of Red Bull Salzburg, who Devils faced in CHL last season.

Fehervar is the only team in their league based in Hungary and this will be the first time in history the two teams will face each other.

Banska are coached by Dan Ceman, who spent a number of years in the UK playing for Bracknell, Sheffield, Nottingham, Fife and Dundee.

He also started his coaching career in Dundee before moving to Denmark to coach there for a number of years.

MAC Budapest are travelling to the UK for two games in August, facing the Sheffield Steelers the night before they travel to Cardiff to take on Devils.

Budapest also play in the Slovakian Tipsort League and this will be the first time the two sides have met.