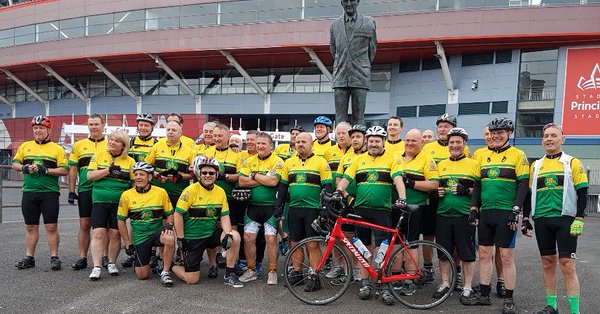 Dai-Sport journalist Terry Phillips joins the Old Farts Cycling Club on their gruelling, exhausting ride to Exeter on Saturday. It’s the fourth year Terry has been on an OF cycle ride – and he’s cheated every time by volunteering to drive a support car rather than riding.

He’s done it again this weekend and will be driving the 140 miles to Exeter encouraging the riders rather than putting in the hard graft.

The Old Farts, a diverse group of aging former rugby players and sportswomen, are taking on their biggest challenge this weekend.

Around 40 riders, all aged over 50, will take on a Cardiff-To-Exeter cycling challenge over one day in their pursuit of maintaining fitness and raising funds for local charity.

By the time Old Farts riders cycle into Exeter on Saturday evening nine of the group will ridden more than 544 miles during four events – and that doesn’t include weekly training sessions in wind, rain or sunshine.

Even Peter Karrie, famous for his role in Phantom of the Opera, and Gary Barlow have played their part along the way – although neither did any cycling.

Remarkably, the club have raised £100,000 for local charities from the rides and other fundraising events including the annual summer ball – and they are pressing hard to support deserving causes even more.

Welshman Peter Karrie, a singer who starred in the lead role for Phantom of the Opera, provided the entertainment at one of the OF’s summer balls – and the 2019 event is at Portland House, Cardiff Bay on Saturday, September 14.

Nine of those – Hall will miss out this time – will set out from Roath Park on the strength-sapping, arduous cycle ride from Cardiff to Exeter – an event which covers 140 miles and will take a minimum of 12 hours to finish.

The ride to Torquay was longer – 160 miles – but that was split over two days. The OF’s will tackle Cardiff to Exeter in one day.

There are 80 members of the Old Farts and many of those who don’t ride will be adding support along the route.

Cardiff to Exeter on Saturday, July 13 – the stops:

Third stop: World’s End pub. Located just outside Taunton on the A38 and just off the M5.

Where did it all begin?

The four men were unfit, overweight and hadn’t ridden a bike for three decades.

“A few of us decided we needed to get fitter and have a challenge in life,” said Ring. “I suggested we aim for the cycle challenge. Little did we know how it would grow. We called ourselves ‘The Old Farts’ because we were all over 50 and hadn’t cycled for many years.”

When ‘Itchy’ said ‘Why don’t we do a charity bike ride from Cardiff to Tenby’ hilarity ensued, with comments varying from the unrepeatable to ‘I don’t even like driving that far’.

Ring persevered and following more beer the four men agreed to take it on.

Numbers began to swell, but most of the new Old Farts group had not been on a bike since the days of the Chopper!

Five months later the OF’s went from zero towards their goal of cycling 115 miles.

A motley crew mainly ex-rugby players from St Josephs, St Peters, St Albans and Old Illtydians combined with one goal in mind – to raise as much money for charity as possible. The Old Farts Cycling Club was born.

The story of Old Farts cycling:

More than 40 riders, including three ladies in Kate Darcy, Liz Burge and Jess Morrick, set off from Roath Park Rec aiming to reach Torquay in two days. The verdict was ‘A stunning effort by the Old Farts. Remarkable.’

There was a big thank you from the Old Farts to Don Skene Cycles, Damian Harris and Cyclopedia for helping to ensure everybody’s bikes are safe.

Skene Cycles donated 32 gels for the riders, while Overhang have given 44 drinks to the cause.

Tredz Cycles also supported the ride, while the Farts offered big thanks to Mark Bolwell and Sharron Davies from Rumney Physiotherapy clinic for their help.

The 40-strong group including a doctor, electricians, plumbers, tilers, carpenters and more.

St Joseph’s, St Albans and St Peters rugby clubs are all represented on the challenge.

Third ride 2018: Cardiff to Oxford (116 miles). The third Old Farts annual ride – a journey through the Cotswolds to Oxford. The club’s is growing ever stronger – more and more local charities are being helped.

The Old Farts – a straggler’s story by Wingrove Wilkinson, who says ‘My tale is a story of encouragement, lies, pain and inspiration.
Old friends Tony Lia and Garry Nyhan persuaded me to join the beginners and improvers. I joined them on one cold morning ride to Cardiff Bay.

Having not been on my bike for a while and being extremely unfit, I could not go any further after four miles, took a break and rode back slowly,

A week later I went out on my own around Llanrumney, a shorter ride but with more slopes and hills. I was shattered and told myself I had no chance of doing any of this ride.

After a couple of more weeks I went out again with my friend Kate, this time I rode 11 miles and something stirred within me. Maybe I could go on the ride!

I realised that I would not get enough training done and therefore should only go with the Old Farts as a support person.

This is where the lies started. Christopher Cox said ‘Just do what you can, 15 miles, just be involved, it will be fine.’

Paul Ring joined in and said ‘We’ll have a relay team, who can take turns’.

So I agreed to take part and do my bit.

I quickly realised that there would be no relay as my partner was doing fine and in better shape than I had been told.

I kept up with the group until Duffryn. By the time I got to Newport Docks, the group had disappeared, I was on my own and in pain.

I stopped, drank water and told myself I would get to the Severn Bridge one way or another, even on my own.

I felt alone, but determined. As I approached Lliswerry in Newport, Lee Beames was on his way back, on a search and rescue mission. As I turned in towards Newport retail Park, there they were all the riders waiting for me with words of encouragement.
We set off again and went out towards Llanwern and I started to struggle, as the pace had taken it out of me. Then the next liar came forward. Step up Paul Sebburn. He dropped to the back of the group and spoke to me.

Paul and I had not spoken before and didn’t really know each other. Paul went on to tell me that he liked to ride slowly and take in the scenery.

At the time I believed him but later I realised that he was there for me. Paul talked me right to Chepstow, stopping when the pain was too much and preparing me for every slope and turn as we went.

When we reached the bottom of Chepstow Hill, Paul told me that everybody walks up there the first time, so he would see me at the top and wait.

As I ran out of steam Mark Maunder (Shiney) stepped up and put the bike on the car saying I’ll take you to the top. Paul was at the top waiting, as promised. We rode over the bridge together and into the first stop in Aust. We were clapped in by all the riders with only words of praise and encouragement. I had never ridden so far.

I could only go on in support vehicles and from there on my participation was sporadic, but each time I got on the bike, I was encouraged by each and every Old fart.

As we rode out on the second day, we came to the first massive hill and I could not make it up there, so got a lift.

When I did get back on the bike, I was passed my many of the riders, each shouting, go on Wingrove, keep going Wingrove. I rode at my pace and made it to the next stop.

Once again, my knees were burning. I had to stop. I watched those amazing people pushed themselves to the limits, riding up hill after hill, going through all kinds of pain and suffering.

At the last stop, we were to ride into Torquay together. These amazing selfless riders put me at the front to lead them of, as the slowest rider and would ride at a pace that suited me.

We rode onto Torquay together, to be greeted by family and friends of the group. There were hugs, kisses and tears.

An amazing experience, which for me brought mixed feelings. I knew I had achieved more than before, but was disappointed that I could not have done all that the others had done.

Not one of these Old Farts treated me like I hadn’t done enough, like I hadn’t been right there with them all the way. There were only words of encouragement and praise.
It was an amazing experience with some of the most amazing people I have ever met. One that I will never forget and one that inspired me.

I salute all old Farts and support team for what they have given me. They are superb, a bunch of people who fully deserve support and donations to their charities.

The OF club say: ‘This Saturday we will attempt the longest one-day ride and hardest yet.

140 miles in one day from Cardiff Roath Park to Exeter City Football Club.’