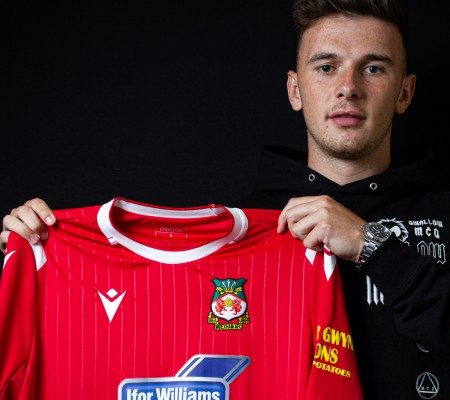 Mark Harris is back with Cardiff City after a loan spell with Wrexham.

Cardiff City striker Mark Harris is gunning for goals – in North Wales. Wales under-21 international Harris has scored in his last three Wrexham appearances and says: “I want more.”

‘Sparky’ is on loan at Vanarama National League Wrexham and has netted against Boreham Wood, Dover Athletic and fired the winner against Halifax Town.

Now his sights are on Notts County, the team Wrexham play in Nottingham on Sunday (3pm).

“I came to Wrexham intent on scoring goals and making assists,” said Harris. “You can’t ask for much more three goals in four games, really, but it has to continue now.

“I can’t just be happy with three goals. I have to keep pushing and keep doing it so let’s hope that happens.”

“My first two goals were away so to score my first goal at The Racecourse means a lot to me. Earning three points with 10 men makes it even better.

“When the final whistle blew it was an amazing feeling.

“But that is done now and we have got to move onto Sunday’s game at Notts County’s Meadow Lane ground.”

Wrexham had Jake Lawlor sent off against Halifax, but they still won 1-0 thanks to a Harris strike.

“We deserved to be two or maybe three goals up at half-time,” said Harris.

“I had a couple of shots and so did a few of the other boys, but we just couldn’t get the ball in the net.

“We were all thinking ‘it’s not going to be one of those days is it?’

“But we said at half-time we are going to go out and win.

“The red card came, but we didn’t give up from there. The gaffer went with two up front, we went for it and played as if it was normal.

“Ruthers (Paul Rutherford) played the ball through and I had to keep myself composed. Luckily, I dinked it over the goalkeeper and it was great to see it go in.”

Wrexham have earned one point from. Two away fixtures this season, drawing 2-2 draw at Boreham Wood after squandering a two-goal lead and losing 2-1 at Dover where the Reds went ahead but conceded twice following the dismissal of Bobby Grant.

Striker Mike Fondop has left Wrexham after his contract was cancelled by mutual agreement and here has joined Chesterfield on a one-year deal.

The 25-year-old joined Wrexham AFC in July 2018 after being tracked by then manager Sam Ricketts.

After a brisk start to the 2018-19 campaign he found his chances limited and was loaned to Maidenhead United for the remainder of the season.