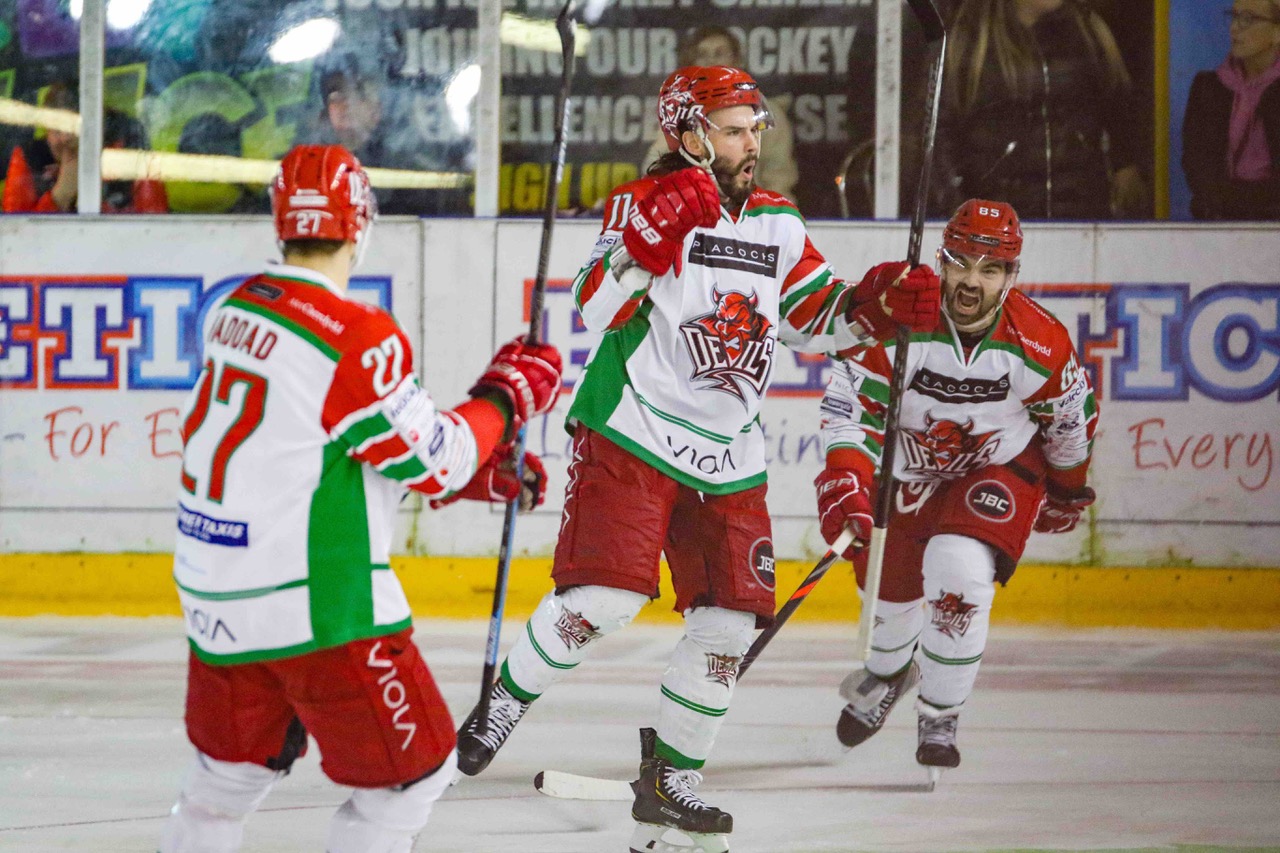 Stephen Dixon’s Devils’ double helped his team ride out the Storm and move to within three points of Elite League leaders Sheffield Steelers.

Cardiff have four games in hand and go into a huge home match against Dundee Stars at the Viola Arena this evening (6pm).

Captain Joey Martin is likely to return having recovered from an injury.

“It was a big win against Manchester. We played much better than we did at the Storm Shelter last weekend (1-4 defeat).

“This performance was completely different and we controlled large portions of the game. Their goaltender (Matt Ginn) was fantastic and you have to give credit to Manchester.

“They never go away, Storm compete, compete and compete.”

Former Devils captain Ryan Finnerty is Storm’s coach and he said: “We deserved something out of the game. Five-on-five we competed really well.

“We had a short bench, guys were double shifting and we were down to four D, but we did enough to earn some reward.”

Dixon scored twice and goalie Ben Bowns made 23 during Cardiff’s 2-1 victory on Saturday night, while Storm thought they had forced the game into overtime when they found the net late on.

But the referees ruled the final buzzer had already sounded before the puck went in.

Storm’s home venue is virtually a copy of the old Big Blue Tent Devils played out of for nearly a decade.

The ice surface is smaller than what the Devils are used to at their Viola Arena home, but the atmosphere is always electric with the fans literally right over top of the teams and with a full bus of travelling supporters along with the Devils’ owners and their families, the rink was rocking.

Devils scored after 7-57 when Charles Linglet and Matthew Myers set up Dixon as a powerplay ended and he blasted the puck home.

Technically, it wasn’t a PP goal because the penalty had expired two seconds before the puck went in, but it was the Devils PP unit that made it happen.

The middle period saw Storm have two powerplay chances of their own with Blair Riley and Mike McNamee both taking two minute minor penalties.

Storm had great movement, but couldn’t find a way to tie the game with Bowns the best penalty-killer for Devils with some point blank stops to keep the scoreline 1-0 after 40 minutes.

Tyson Fawcett tied the game at 44-26 when he jammed in a loose puck past Bowns to make it 1-1 and then Devils found a winner when Dixon scored on a powerplay with 47-17 gone.

Dixon’s tip beat netminder Ginn after a blast from Joey Haddad to put Devils 2-1 ahead.

Storm battled for an equaliser and thought they had scored as the clock ticked down to zero, but the buzzer to end the game had already sounded.

Both Sheffield and Glasgow had a rest day on Saturday after playing Friday night. They clash at the FlyDSA Arena a week after the Steelers’ victory in Braehead.

That win came from a remarkable Steelers’ comeback in the third period to turn a 3-1 deficit into a 5-3 lead within the last 10 minutes.

These teams also face each other in the Challenge Cup semi-finals this month.

Belfast’s first visit of the season to Guildford comes off the back of a home win against Sheffield which lifted Giants back into the title race.

Fife and Manchester are involved in what’s starting to become a three-way battle for one play-off place and this game tonight in Kirkcaldy could well be look backed on come the end of the season for whoever misses out.

Fife trail Storm, who occupy the last play-off spot, by a point. Dundee are the third team involved in that battle.

“Everyone is under an incredible amount of pressure now,” says Flyers coach Todd Dutiaume. “At this point, we are severely under-performing form where we have been in the last seven years.

“We are past the point of trying to boost spirits. The guys are going to have to buck up and be professionals.”

New signing Frankie Melton has flown in from America to join Storm and Finnerty said last night: “Frankie landed this morning, but we’re still waiting for his clearance.”