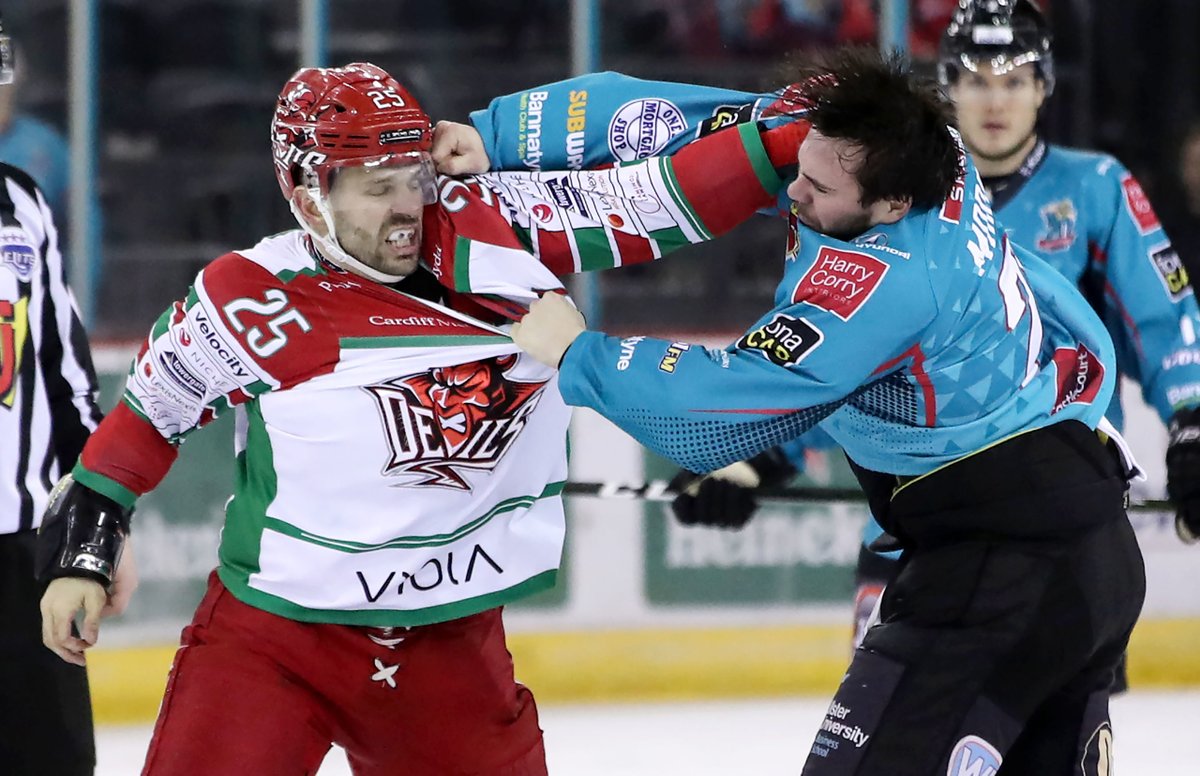 The Chef came up with the perfect recipe for Cardiff Devils at the SSE Arena in Northern Ireland.

Canadian winger Joey Haddad, nicknamed the Chef because of his cooking prowess, scored his 26th goal of the season to keep Devils’ Elite League title charge on course.

The 31-year-old forward from Nova Scotia with a power play goal during the first period, taking his points tally to 43 in 38 matches, and secured a crucial victory at the SSE Arena in Belfast.

There was an added bonus for Devils with League leaders Sheffield Steelers losing 6-5 against Guildford Flames, having been thrashed 5-1 by Nottingham Panthers on Saturday.

Giants were far from happy with Haddad’s goal and head coach Adam Keefe claimed it should have been ruled out for goalie interference.

“We hit a post and the Devils goal was questionable because of goalie interference,” said Keefe. “It looked like a player skated into Shane Owen’s stick,

“There are no excuses, these things happen in a game. I was happy with the effort and team performance overall.

“We needed to scorer and that didn’t happen.”

Devils go into the Olympic break – Great Britain have qualifiers this week – happy with their two-points reward from a difficult weekend and head coach Andrew Lord said: “We kept Belfast to the outside and we had a surge in the second period when we could have scored another one or two goals.

“The third was a crap short, but we found a way to win. It got a little crazy near the end and I could have done without that, but it was greats to earn the win.”

Giants remain third, two points behind Devils, who have two games in hand. Steelers remain are top, but Cardiff have four games in hand.

Midway through the first period Liam Morgan dropped the gloves with former Giants captain Blair Riley for a centre-ice scrap.

Ironically Elgin Pearce, who scored Belfast’s powerplay winner on Saturday, was in the penalty box for holding when Haddad fired his shot past goalie Owen.

The referees reviewed the goal for possible goaltender interference, but it stood as Owen was bumped while standing outside of his crease.

Cardiff shut Giants down in the second, keeping the puck to the outside and limiting quality chances.

Giants had their best chance to tie the game when Devils forward Masi Marjamaki took a five-minute major for throwing a hit to the head of David Goodwin.

Three minutes into the man advantage, Giants took a tripping call to nullify the remainder of the powerplay and the Devils held on to win. Ben Bowns kept a 33rd shutout as a Devil in six years with the club.

Cardiff were again without playmaker Charles Linglet, but he now has thge Olympic qualifying break to recover fitness.

Just back from another fun double header weekend in Belfast and a split of games between two great teams. A huge thank you to the @belfastgiants & @SSEBelfastArena for once again being gracious hosts and thank you to all the Devils fans who cheered on the team all weekend long. pic.twitter.com/aVpdQV0ssp