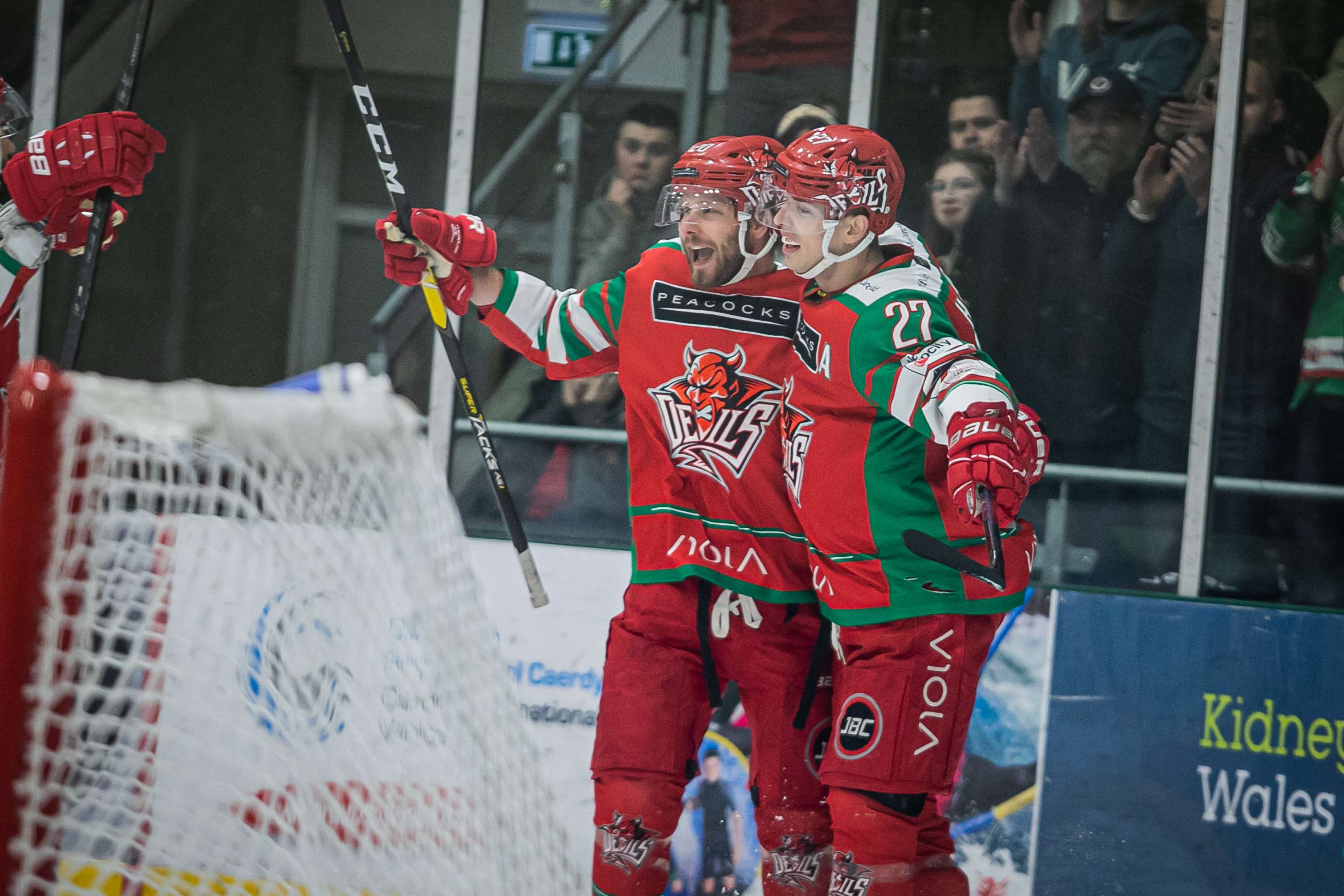 Advantage Cardiff Devils. Captain Joey Martin and his team are top of Elite League after firing seven goals past Sheffield Steelers at the Viola Arena.

Devils won all three periods and now focus on Sunday’s Challenge Cup final when the two rivals clash again at the same venue in Cardiff Bay.

“We need the fans to be noisy from the start for the cup final,” said head coach Andrew Lord. “Keep supporting the guys.

“It will be a different look with half the building filled by Sheffield fans and I look forward to that competition in the stand as well.

“We had a good week preparing for the league game. The guys were dialled in and we managed a good mix of rest of work.

“I hated the first two minutes of the league game. We were terrible, but scored the first goal and that settled us down.

“I liked the way we managed the match when we had the lead.

“We were pretty experienced. There was a lot of emotion in the building. It was loud and it was a physical game both ways.

“Emotions ran high and we did a pretty good job focusing on what we needed to do. Steelers have most firepower in the league. They are so deep, but we came through a big test.”

Aaron Fox, Sheffield’s coach, looked downbeat when he emerged for post-match interviews, saying: “We had a better first period than the 4-2 deficit suggested and the game kinda ran away from us.

“Now we’ll catch some video and focus on Sunday.”

Lord rested Matt Pope and Bryce Reddyck from the league match and he has to sit out two players from the final. Steelers are in the same situation, having left out recalled defenceman James Bettauer for the league match to replace Janne Kolehmainen, who joined Jonas Liwing as the healthy scratch.

Devils leapfrogged Steelers to take top spot in the League standings after a clinical 7-3 win in front of a sell-out 3,000-plus spectators.

Lord’s Devils opened a two-goal lead in the first six minutes with goals from Stephen Dixon (2-42) and Joey Haddad (5-46) before the Steelers pulled one back through Davey Phillips at 12-06.

Blair Riley restored the two-goal lead for the home side at 14-53, but 11 seconds later the Steelers’ Anthony Deluca scored to make it 3-2.

Masi Marjamaki’s second effort saw him tuck the puck into the net at 19-23 to give the Devils a 4-2 lead after the first period.

The lone goal in the middle period came on a breakaway for captain Martin (24-03) who slipped the puck under goalie Tomas Duba to give the Devils a commanding 5-2 lead.

Evan Mosey scored his fourth goal in eight games since he returned from injury and Cardiff led 6-2 (45-24). Riley scored his second on a breakaway at (49-00) to put Devils ahead 7-2.

At 55-13 Lucas Sandstrom pulled one back for the Steelers, but it was too little, too late and the game finished 7-3 to Cardiff.

Both teams had a 100 per cent penalty kill record.

The win puts Devils one point ahead of Sheffield in the League table with three games in hand. Steelers had been top since November.