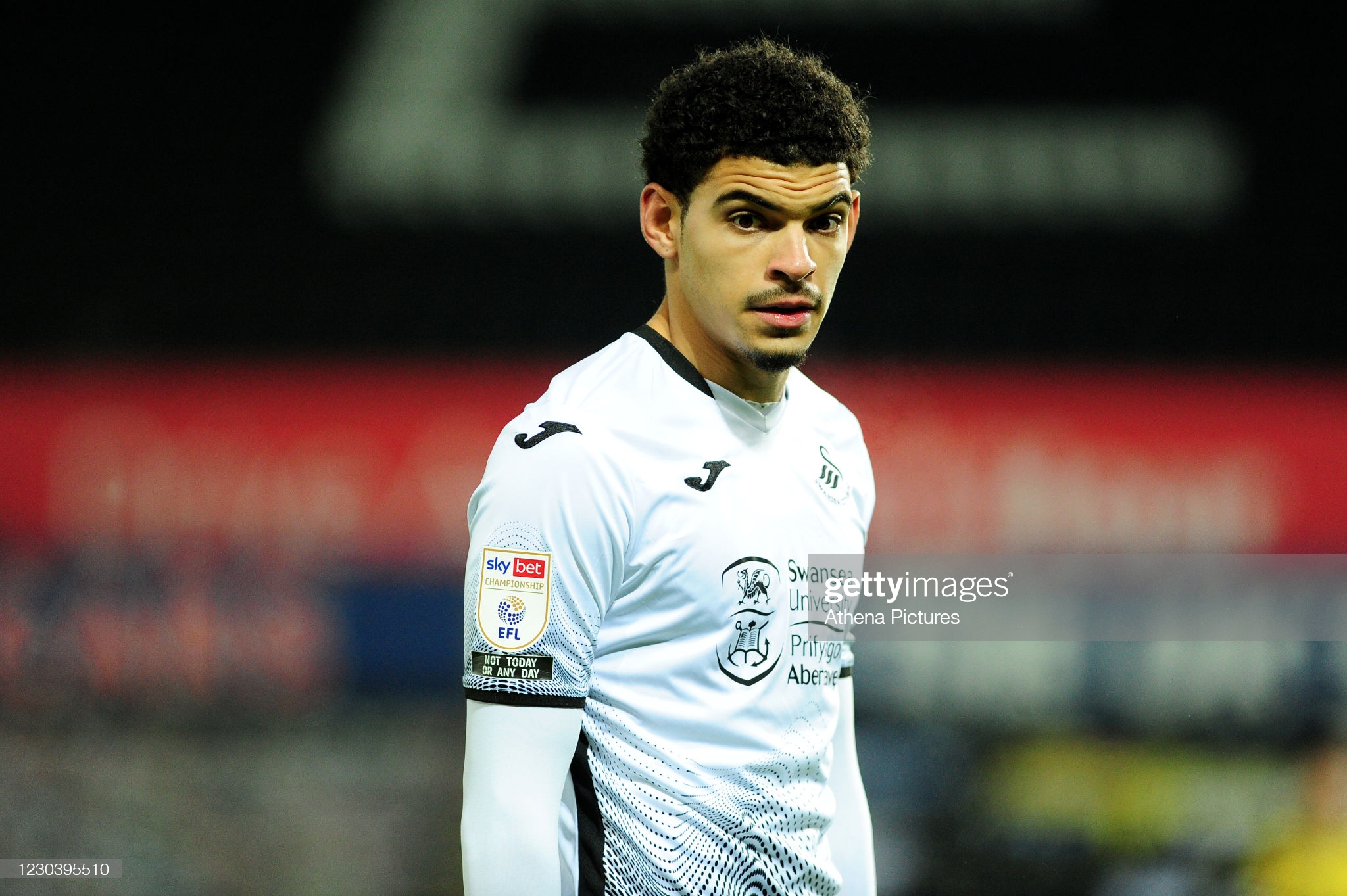 Morgan Gibbs-White has gone back to Wolves. Pic: Getty Images.

Morgan Gibbs-White would have been one of the best players in the Championship had he stayed at Swansea City.

That’s the firm conviction of frustrated Swans head coach Steve Cooper, who was powerless to stop the Wolves midfielder being recalled by the Premier League club this week.

Swansea had spent three months getting the England U21 international fit again following an early season fracture in his foot.

He made a five-minute re-appearance as a substitute against Watford last weekend, before being whistled back to the Midlands by Wolves boss Nuno Espirito Santo because of injuries at Molineux.

“We’d worked hard to get him and even though unfortunately he hasn’t been able to play as much as we’d liked due to injury, I firmly believe he would have been as good as anybody in the league once he got going,” said Cooper about Gibbs-White.

“That hasn’t happened and there’s been a lot of recalls this week across all of the leagues. There’s been games called off with weather and Covid.”

The Swans have been heavily reliant on loan players since dropping down from the Premier League – they have had five borrowed players in their match day squad when they have all been fit this season, with Freddie Woodman, Marc Guehi, Gibbs-White, Kasey Palmer and Viktor Gyokeres all featuring.

But Cooper had admitted the loan cycle – generally two blocks of five months, with the constant possibility of recall from parent clubs – makes long-term team building a difficult achievement.

The Swans have also had to let Palmer return to Championship rivals Bristol City.

“Down the line I think we need to come away from having loans. I think in each window we need to be signing permanent players and building our own teams,” added Cooper.

“Loans are a necessity at the moment and we’ve benefitted from it of course but the longer term view is to have our own squad with our own players but we aren’t at that stage.

“When you aren’t at that stage and you are having loan players there’s always a chance you could lose players and that’s happened this week.”

The boot is sometimes on the other foot, with Cooper himself recalling defender Brandon Cooper from Newport County this week ahead of the Swans’ FA Cup third round tie at Stevenage on Saturday.

The blow has been softened for County manager Mike Flynn with Swansea midfielder Jack Evans leaving for Newport on a free transfer, having agreed a deal until the end of the season.

Cooper added: “Brandon has been called back because we’ve picked up a few injuries with centre backs over the last couple of weeks. I feel for Flynny at Newport.

“Mutually, the loan was working really well. Brandon was getting good game time and good exposure. He was playing really well and I hope Newport were benefitting from that as well, but unfortunately sometimes when you are the parent club you can make decisions.

“We just felt like it was better for us if Brandon came and spent the rest of the season with us. He’s in our longer term plans anyway but he comes back in better shape because he’s had that exposure of league football which all young players need.”

Cooper is expected to rest a number of players at Stevenage, but has promised to still field a strong line-up for the tie at their opponents, who are third from bottom of League Two.

“I’ll make some changes but it won’t be wholesale. We are planning on taking all of the squad to Stevenage because we’ve good momentum and the moment and are in a good place.

Swansea City midfielder @JackEvans9898 has completed a move to @NewportCounty on a free transfer.

Everyone at the club wishes Jack every success in his future career.

“Regardless of it being a league or a cup game I just want to keep things going. I think it’s important to keep everyone engaged and ticking along nicely.

“Training has been nice this week. We just want to keep improving and keep getting better. It’s a cup game we want to win and play well. We’ll be doing our best to do that.”

“There’s a lot of ‘what ifs’ that can happen in the FA Cup. That’s inclusive of some great experiences and great events to go and play Premier League teams and things like that.

“First and foremost we need to win on Saturday and that’s the most important thing. I respect Stevenage. If we end up getting through it won’t be a problem that’s for sure.”