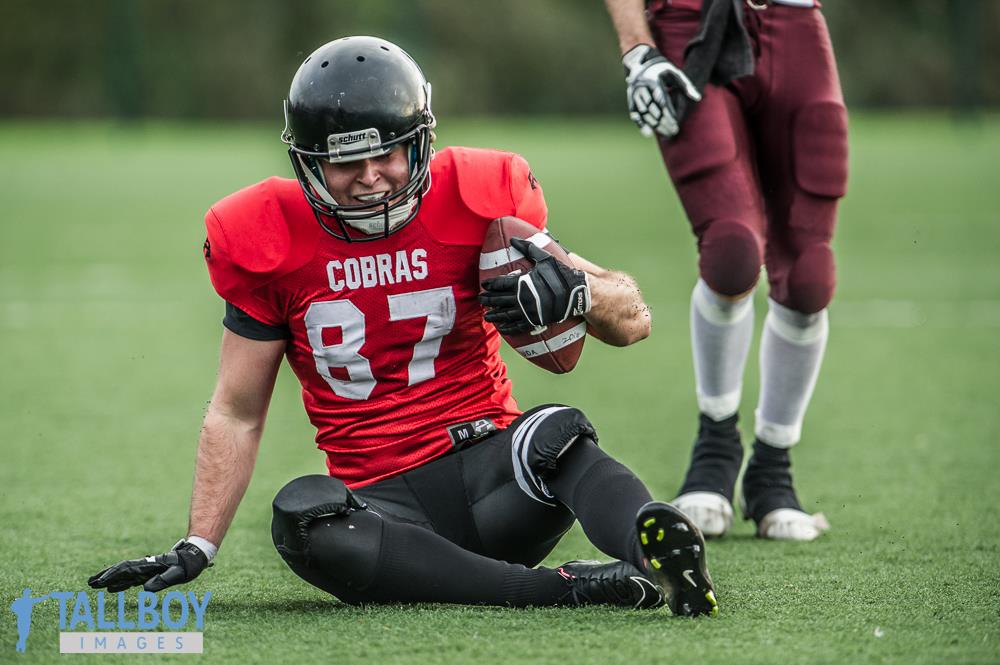 The Cardiff Cobras season may have been grounded Photo: Craig Thomas

All British American Football activity has been suspended – just 48 hours before one Welsh university side was due to compete in a semi-final.

The Cardiff University Cobras team has reached the Division One South Final of the BUCS university league and were due to face long time rivals from Southampton University the Stags in a 5pm kick-off on the south coast this Sunday for the right to play in a national championship game.

But the British American Football Association (BAFA) announced it had suspended all activity from midnight with the ban impacting on the play-offs in the university championships as well as training for the more than 70 clubs that compete in the British league.

BAFA chief executive Pete Ackerley also announced its national league season, for community clubs, from the Premiership to the third tier division two, that was due to kick-off in early April has been postponed.

That means the South Wales Warriors, the only Welsh side that competes in the BAFA National League, don’t know when their return to the second tier Division One will begin and they cannot continue with their weekly training sessions.

The suspension leaves the Cardiff Cobras unaware when or if their semi-final, which will also decide a promotion place to the BUCS Premiership (South), will take place.

The winner of the semi-final would win promotion and the chance to play the Division One North champions for the second tier national championship which was due to be held on Tuesday, March 24 as a curtain raiser to the BUCS Big Wednesday event in Nottingham where champions from the main university sports will be crowned.

Promotion to the Premiership would also allow the Cobras to renew their league rivalry with the Swansea University Titans who have competed at the top level for four years.
However at present the Cobras simply do not know if their season can be resumed.

“With regards to what this means for our playoff run and promotion fight, we’re as yet unsure. Both teams would love for it to be settled on the field, and hopefully that can still happen, however we appreciate the gravity of the situation and that the safety of players and the general public comes before all else.

“Thank you to everyone for your help and support throughout this historic season for the Cobras.”

They competed in the former British Collegiate American Football League College Bowl II in 1988 and shared in a national championship following a 0-0 tie with the Hull University Sharks. The following year the Sharks secured the championship by the narrowest of margins defeating the Cobras 7-6.

The Cobras had already seen the winter’s stormy weather threaten to disrupt their play-off run and had to stage their two post season games, a 28-8 victory over Reading Knights, and a tight 9-0 victory over the Exeter Demons at an artificial pitch at the Filton College in Bristol.

The Cobras finished their regular season with a 43-27 victory over the Stags in Southampton. In December the Cobras defeated the Stags 49-27.

The South Wales Warriors had been due to hold a training session at their base in Pontyclun this Sunday and head coach Geraint Roberts said he supports BAFA’s decision to suspend all activities.

He said: “I’ve no idea what will happen from here. It’s a case of it being a concerning time for everyone and the most important thing is to keep everyone safe from risk. Taking into account the whole picture, football just isn’t important.”

BAFA chief executive Pete Ackerley said: “This is not a decision that has been made lightly, and I know it will cause disappointment and inconvenience for many of you. We all want our great game to continue, and not being able to practice and play is incredibly frustrating for everyone. Yet I believe in this current moment, with the situation facing not just Great Britain but the entire world, it is the right decision despite it being a difficult one to make. The decision has been made with health and safety prioritised above sport.”

He also said the suspension will be under daily review: “I hope it goes without saying that I am desperate to get our sport back up and running as soon as it is safe and sensible to do so. We will of course lift the suspension on training with enough time to allow teams and players to prepare for competitive fixtures.”