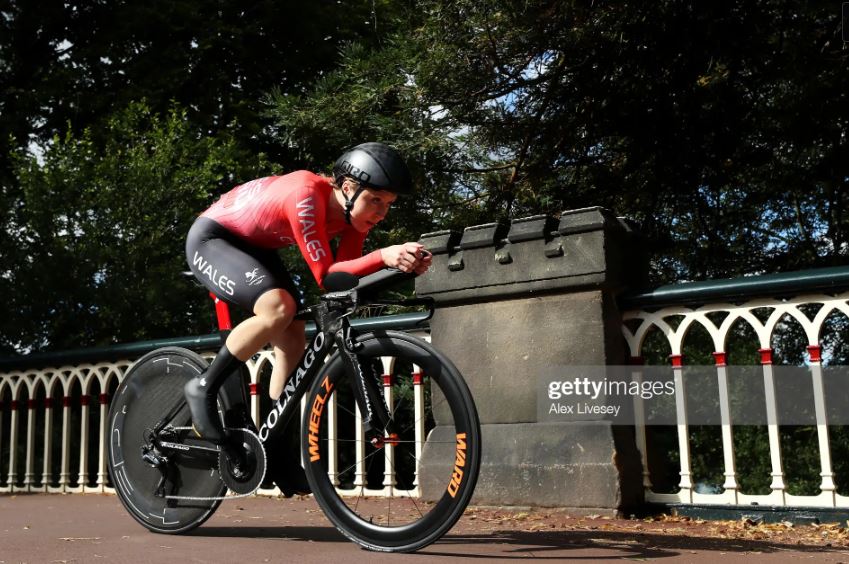 A junior doctor during the Covid-19 pandemic, the Cardiff-born athlete had an unusual journey to becoming a world class cyclist after being surrounded by sport as a youngster.

Growing up in Cardiff, a young Morris enjoyed netball, hockey, cross country, gymnastics, triathlon and tennis, but strangely enough, didn’t get on the cycling track until she was at university.

Skip forward a few years, and Morris finished fourth in the women’s team pursuit at the Commonwealth Games in Birmingham and then represented Wales in the individual races – finishing 16th in the time trial.

She followed that up by making the Great Britain team for the women’s team pursuit at the European Track Championships in Munich this month, where she narrowly missed out on a medal by finishing fourth.

While Morris has long been an obvious sporting enthusiast, it wasn’t until university that she started cycling properly, so why was it that she decided to get on the bike exactly?

“I went off to the University of Southampton and wanted to find a triathlon club, and then in my second year I joined the university’s cycling club alongside the triathlon club because it made up a significant part of a triathlon and it was an area I needed to improve in,” she explains.

“I wanted to get more confident, and it just went from there really. They wanted people for the track team at the university championships, so I started doing track sessions.

“It started to get difficult when I was on placement in my third year while juggling three sports.

“Running was probably the easiest time-wise, but I struggled with injury, so I was riding the bike more and more and I just kept improving, which is always a good way to keep motivated.

“Cycling isn’t always the easiest sport to access. There is a lot to learn about the bike and then you have to learn how to ride a track, so I am very fortunate and grateful that the university cycling team helped me so much.”

When Morris finished her degree, she began working as a junior doctor during the Covid-19 pandemic, before taking a well-earned break to focus on her other passion.

“I worked in 2020 and 2021, so the Commonwealth Games, marked a year from when I took a year out to concentrate on my cycling,” she  says.

“Fortunately, it has paid off. I’ve gained a lot of experience.”

Morris went to Llanishen High School in Cardiff and was joined by several past alumni in Team Wales for this year’s Commonwealth Games.

The 27-year-old grew up encouraged by her parents and school to play a variety of sports and was captivated from an early age.

“I was sport mad when I was younger. Gymnastics was my main sport back then!

“I was always busy, there was hockey, netball and cross country at school. I was doing athletics and some tennis outside so there was a lot of variety really.

“I remember joining Cardiff junior triathlon club during high school. I borrowed a bike and we would train at Maindy. I really enjoyed trying new sports, but I just loved getting on the bike straight away.”

At the time, Morris was at the beginning of a promising career in medicine before support from Cycling Wales and Sports Wales helped her achieve her dreams and represent her country at the Commonwealth Games.

“I was getting close to the university individual pursuit record in my final year, which was held previously by Ciara Horne.

“I thought that would be a good way to bow out. But at the time, Welsh cycling were advertising a senior support programme for women.

“I wasn’t expecting to carry on; I thought when I was a doctor that cycling was going to be a hobby.

“I wasn’t sure how I’d be able to balance it, but I enjoyed it. I started getting support from Cycling Wales and Sport Wales.”

Morris hasn’t given up on her other dream of a future in medicine and is optimistic about her future in both arenas.

Even after graduating from medical school, there is a long road of training ahead for Morris, but she is hoping to enjoy her fledgling career in cycling before continuing in medicine.

“When you are working as a doctor, obviously work comes first, so there are times when it is difficult to keep up with training. It is quite nice to focus on my cycling and keep improving,” she says.

“I finished my first training program. Instead of jumping into the next one, I knew I wasn’t getting any younger, and the intention is to work for a long time after cycling, so I just knew I had to go for it.”