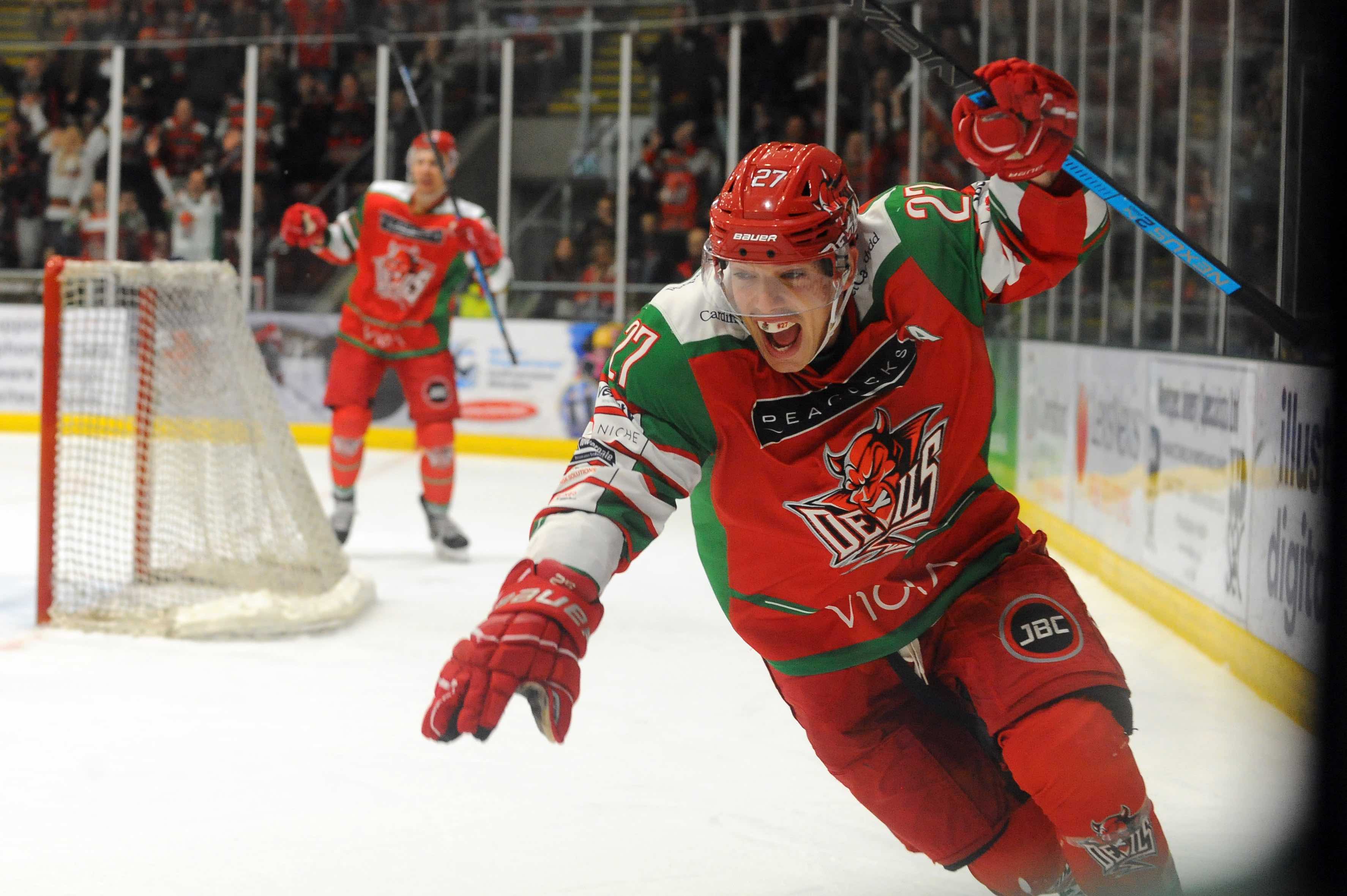 Joey Haddad sparked major celebrations at the Viola Arena when he scored the winning goal against Guildford Flames, while Devils forward Blair Riley made his debut for Team Canada.

Riley played for Canada in their 5-1 Spengler Cup victory against hosts HC Davos, following a 4-1 win against HC Oceláři Třinec on day one of the tournament.

Kamloops-born Riley, a former San Antonio Rampage and St John’s IceCaps American League winger sat out Canada’s win against Třinec before being including in the to face Davos.

“Blair and I exchanged a few messages,” said Lord. “Receiving the news that he was in the team was amazing.

“What a guy! Like so many in our locker room he is a great person and a great team-mate.

“To see him rewarded and play for his country is special for Blair, our club and Elite League. He’s loving it. Davos is a great city and the Spengler Cup a great tournament.

“It’s a competition I have watched since I was a young boy. For Blair to get the nod says a lot about our league and the Devils organisation. We are all rooting for him.”

They powered to a 5-4 success against Flames in a tight, feisty match in front of a 3,000-plus capacity attendance at the Viola Arena and Cardiff hit back from 4-3 down to win. Devils have won seven of their last eight league and cup matches – and even in their lone defeat, against Nottingham, they earned a point because the fixture went into overtime.

Captain Joey Martin and his team have scored 35 goals, conceding 20, in that run and are seconding the Elite League table.

“We were good, really good,” said Lord. “We were energised, had lots of compete and had physicality battles in front of the nets, defensively and offensively.

“When Marty (Joey Martin) went down team-mates like Mark Louis and a few other guys.

“That’s part of game. The guys were smart about it and didn’t take bad penalties. It was a hard fought, play-off style match during which we kept grinding away and found a way to win.”

Martin went down clutching his ribs after what looked a bad hit by Flames defenceman Corbin Baldwin behind the net, although no penalty was called. The Devils man looked in trouble and may be doubtful for the clash with Blaze away.

Haddad’s winner after 54-44 followed good work by Matthew Myers and Mark Richardson and the Canadian winger smashed his shot past goalie Travis Fullerton.

“That was a big goal, there were all big goals,” said Lord. “Flames are an exceptionally good, fast team.

“There was a lot of emotion in our building. I felt fortunate to be part of that. I am proud of the guys and my thanks go our passionate fans.”

“Devils fans were awesome. At ice level that makes such a difference and gave us a boost.”

Goals from both Mike McNamee and Joey Haddad during the last seven minutes earned Devils victory. D-man Richardson led the way as the Devils beat the Guildford for the second time in three days.

Flames’ Jesse Craige’s opened the scoring with Joey Martin and Mike McNamee hitting back before Calle Ackered levelled. The score was 2-2 after 40 minutes.

McNamee levelled at 4-4 before Haddad hit the winner.

Cardiff team continue their campaign at Coventry Blaze on Tuesday, December 31, while the teams face each other again on New Year’s Day at the Viola Arena in Cardiff (4pm).