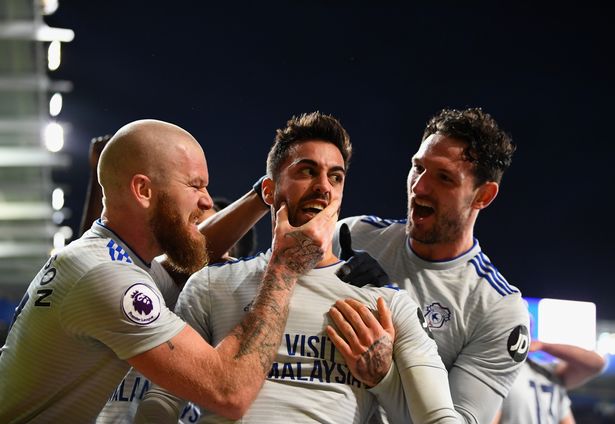 Aron Gunnarsson and Sean Morrison celebrate with Victor Camarasa. How many of the trio will be at City next season? Pic: Getty Images.

Neil Warnock hailed Cardiff City’s best Premier League performance of the season after their 1-0 victory at the King Power Stadium.

“Our best day since we’ve been back in the Premier League,” said the Bluebirds manager.

“It was our best performance because we were playing a team who were flying, with the last two results they had.”

Cardiff ensured Leicester City know what it feels like to be on the end of a knockout blow. The Foxes had stunned top class opposition in wins against Chelsea and Manchester City, but were left aghast by the Welsh raiders from Cardiff.

Warnock and his team now go into their home clash with Spurs on New Year’s Day having earned four points from two away fixtures after Christmas.

Goalkeeper Neil Etheridge saved a penalty for the third time this season when the score was 0-0 and then Camarasa struck during second half injury time.

He went for goal a few minutes earlier and his effort was horribly off target, but that sighter proved crucial. Camarasa scored the only goal with a stunning strike from outside the penalty area.

He curled a shot into the top corner past a flailing Kasper Schmeichel.

“He was the one player capable of doing that.

“The penalty save by Etheridge was a big moment, along with Bamba’s sharp reaction to clear when the ball ran loose following the spot-kick.

“Camarasa got it all wrong with his sighter just before the goal, but the technique for his goal was exquisite. Schmeichel had no chance.

“For me Cardiff were the better team and always looked a threat. Four points from their last two away games is an excellent return.”

Every Bluebirds player contributed fully to a team performance which frustrated the home team and eventually left the Foxes down and out.

Camarasa was man of the match, ably supported by fiercely competitive midfield partners Harry Arter and Aron Gunnarsson, while Etheridge and his defenders were inspired.

The Foxes dominated the first half with 63 per cent possession, but Etheridge thwarted their best efforts. His work included denying Jamie Vardy when the England hit man went through on goal.

Leicester drop to eighth, while Cardiff move above Southampton into 16th.

Ken Choo: What a way to end 2018! A big thank you to all our fans for the fantastic support. We’re working incredibly hard as a club to give you the best Premier League experience possible. Here’s to a great New Year.” #CityAsOne pic.twitter.com/RxntEYrVSt

“Victor is quite capable of doing that every week,” said Cardiff manager Neil Warnock. “He is a super lad and deserves it.

“Overall we deserved the win. We had a good game plan, looked to break when we could and were the better team if I’m honest.

“Our goalkeeper didn’t have many big saves apart from the penalty.

“We showed a lot of character. In the last couple of games we’ve really had to dig deep.

“All credit to the lads. We deserved to win.

“To competed with Leicester and limited them. If we had been more precise in the final third we could have scored two or three.

“I’m really proud not just of the boys, but the whole club. The fans were singing their heads off all day. We’ve come a long way, improved so much since the start of the season.”

“We were up against a team playing deep with a strong defensive unit, long kicks, second balls, counter-attacks.

“We started the game with the right mentality, to try to find solution, to be patient, but also to play forward.

“We tried to push until the end to find this clinical edge. It is a big disappointment at the end. It’s not a fair result. We were unlucky but that’s football.

“We conceded in the last minute and that was harsh because we deserved a better result.”