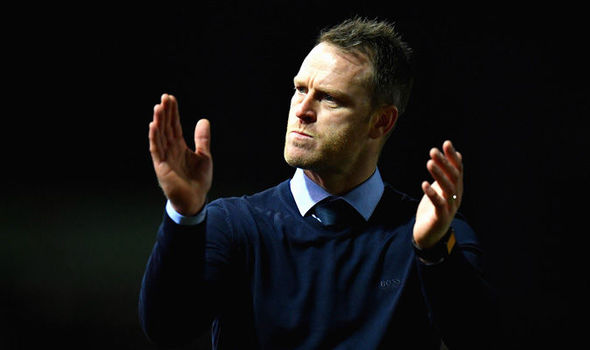 “Buzzing!! Great to get my first senior goal and to earn a point for the team, onto Tuesday!” tweeted Harris, while Newport manager Michael Flynn said: “Mark is an outstanding young lad and l’m absolutely delighted for him scoring first goal.

“He tried to mess it up three times when he kept running into defenders and dribbling back, but he took the chance well.

“I’m over the moon for him.

📊| You have voted @sparkyharris11 as your #NCAFCManOfTheMatch for his excellent performance in yesterday's draw with Exeter City. Well done Mark! 🔥🔥#OurJourneyContinues pic.twitter.com/sDqZ8HSh8q

“All our strikers have scored now so that’s a big positive.

“It’s been a good week for us. Exeter is a tough place to come. They’re effective at what they do and Jayden Stockley up front is a handful.

“ We kept going and we showed our character and our resilience and showed that we’re a good football team.”

Harris’ fellow strikers Padraig Amond, Jamille Matt and Antoine Semenyo all scored in the Carabao Cup win at Cambridge United in midweek, while Amond also netted the winner against Crewe.

The 19-year-old Harris is on loan at Newport County and has impressed during the early weeks of the new season.

🗣 POST-MATCH | Michael Flynn says he’s pleased that his strikers are all off the mark in 2018/19. #OurJourneyContinues pic.twitter.com/w7VhMB7kfb

“I felt that without being great we were the better team,” said Flynn.

“They had a five-minute spell in the second half when they could have scored again, but for a great save from our goalkeeper.

“Joe is outstanding. We’re fortunate to have him and if he keeps on putting in those performances I’m sure he’ll go on and play in a higher division.”

Flynn was satisfied with a hard-earned point, but admits being frustrated that his team have too often lacked an end product in attack.

“I was a little bit frustrated and I can’t quite put my finger on it, but we just lacked that little bit of quality in the final third.”

Harris, though, made the difference after replacing Josh Sheehan, riding a tackle in the box before calmly slotting the ball past Exeter stopper Christy Pym.

David Pipe stayed off with an impact injury at half-time and could be a doubt for Tuesday’s home clash with Notts County, while captain Andrew Crofts missed the game because of a toe infection.

He is hoping to be fit to return against the Magpies.

Stockley fired Exeter ahead after 21 minutes, punishing County for a defensive error, heading in from Jake Taylor’s free-kick.

The home team had several opportunities to put the result beyond question, but Stockley and Dean Moxey both wasted good chances, whilst substitute Nicky Law hit the bar.

There were seven minutes left when Harris took his chance, finishing calmly after winning a challenge against defender Troy Brown.

Flynn made two changes to the side who cruised to a comprehensive victory at Cambridge United in midweek and earned a home tie with Norwich City in the Carabao Cup.

David Pipe returned to the team, playing at wing-back opposite Dan Butler.

Buzzing!! Great to get my first senior goal and to earn a point for the team, onto Tuesday! ✅ https://t.co/DmYQqdXn1r

Tyreeq Bakinson, who impressed in the holding midfield position at Cambridge kept his place alongside Matty Dolan with Sheehan playing a little further forward supporting Padraig Amond and Jamille Matt in attack.

Former Luton Town and Bristol City teenager Bakinson, aged 19, was again in outstanding form, finding the touches and flicks to cause the home team problems.

The Exiles were still making good use of Dolan’s corners, while Demetriou was unlucky to see a looping header go just over.

County had a let-off after 76 minutes when Stockley’s close-range header hit goalkeeper Day in the face and Law fired against the bar before the visitors cleared.

Then came an intervention by Harris when he finished coolly to earn his team a draw and spark would celebrations among travelling fans.