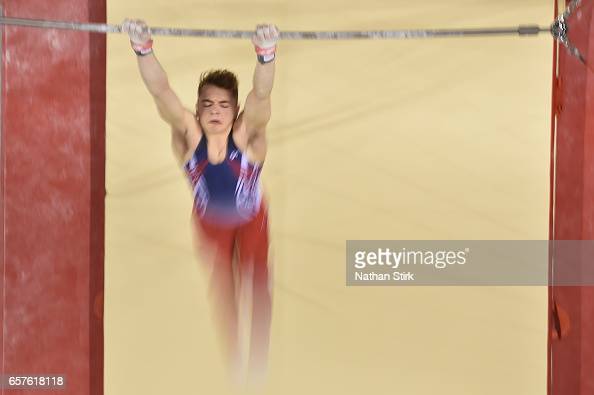 Brinn Bevan and Joe Cemlyn-Jones will spearhead the charge for a first Northern Europeans men’s artistic team gold for Wales for a decade when this year’s event rolls into Cardiff at the weekend.

The pair have recently returned from Japan where they were competing for Great Britain at the Artistic World Championships and are both also in contention to be part of Team Wales at the Commonwealth Games in Birmingham in less than nine months’ time.

2016 Olympian Bevan (South Essex), and Cemlyn-Jones (City of Birmingham), lead a six-strong Welsh men’s team for this year’s artistic Northern Europeans, which are being staged at the Sport Wales National Centre at Sophia Gardens on Saturday 13th and Sunday 14th November.

Both were also part of the Welsh men’s team who bagged silver the last time the Northern Europeans were held, in Iceland in 2019, while fellow Commonwealth Long Listers, Swansea Gymnastics Centre’s Emil Barber – who himself won gold on vault two years ago – and Jacob Edwards, from Wrexham, return having also been part of that team.

Also competing this year is Benji Eyre (Loughborough Students) – who went to the last Commonwealth Games in 2018 and is targeting a Birmingham 2022 spot – in what is his fourth Northern Europeans after three previous appearances between 2015-17, winning team silver at the latter.

Completing the Welsh’s men’s team is junior GB star Alex Niscoveanu – who hails from Penarth and trains at South Essex.

He has been in superb form so far in 2021 and bagged silver in the all-around, floor and pommel horse in the U16 competition at the British Championships in September.

The last time the Welsh men triumphed in the team event at the Northern Europeans was back in 2011 in Sweden.

“We just really want to keep building on our team and make the Welsh team as strong as we can,” said Bevan, the reigning British champion on parallel bars and who took Northern European gold on the pommel horse in 2019.

“I really believe in this team and feel like this is a strong team with a lot of potential leading into the Commonwealth Games.”

Cemlyn-Jones grabbed gold on parallel bars and high bar at the Northern Europeans in 2019 and will be looking to defend those titles. He also took silver in the all-around in Iceland, as well as claiming bronze on the pommel horse and rings.

He also returns to the scene of a successful British Championships in Cardiff in September, when he walked away with four individual medals, including silver in the all-around competition.

He said: “We came second as team at the Northern Europeans last time and I was also second all-around, so hopefully looking to improve on that – and having that home crowd as well in Cardiff is going to be absolutely amazing. It doesn’t really get any better.

“Having that crowd and that energy really does make a difference.”

The countdown is on ⏳

Get your tickets here.. ⤵️

Meanwhile Jacob Edwards, from Olympus Gymnastics Club in Wrexham, said: “I was only 16 at the last Northern Europeans in 2019, I was a junior going into that and for me that was just about the experience. But this time I know I can compete with everyone and that’s what I’m aiming to do. I’m really looking forward to it.”

Other male gymnasts to look out for this weekend include Sofus Heggemsnes, who was part of the Norway men’s team who won gold in 2019.

Heggemsnes is also the reigning individual Northern Europeans men’s all-around champion as well as the defending champion on floor. He also comes into event fresh from making the all-around final at the World Championships.

The 20-year-old, who finished fourth on vault and only narrowly missed out on a medal at the Commonwealth Games in 2018, won silver on that apparatus at the last Northern Europeans in 2019 and was also part of the women’s team who won gold.

Rasmussen, having also just competed at the World Championships, took bronze in the individual all-around in 2019.

Ireland’s team includes Emma Slevin, who last month made history by becoming the first Irish gymnast to qualify for the women’s all-around final at the World Championships, eventually finishing 19th.

This year’s Northern Europeans will see England competing at this event for the first time with Scotland and Ireland also in attendance. There will also be delegations from Sweden, Norway, Iceland, Finland, Denmark, the Faroe Islands, the Isle of Man and Jersey.

It will be the 19th edition of the Northern Europeans and will also mark 20 years since the inaugural event which was staged in Helsinki, Finland, back in 2001.

There was no event in 2018 while the 2020 edition – originally set to take place in Cardiff – was shelved due to the Covid-19 pandemic.

The Northern Europeans has only once previously been held in Wales and that was in Cardiff in 2009.

That event 12 years ago resulted in both the Wales men’s and women’s teams winning gold, while Jessica Hogg also won the women’s individual all-around title.