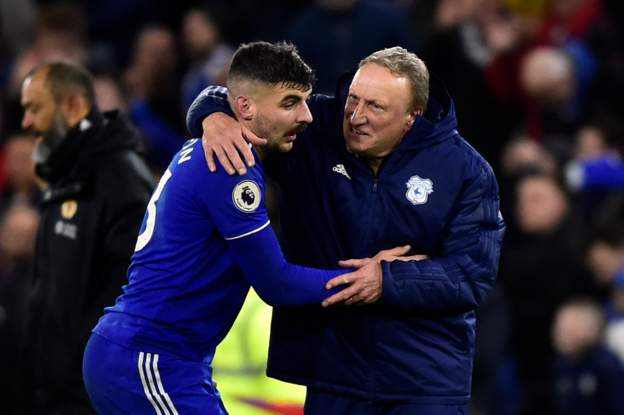 Brother in arms. Callum Paterson became fans' favourite under Neil Warnock but has been used sparingly by Neil Harris

Callum Paterson has admitted he is gutted to be leaving Cardiff City, revealing he felt he wasn’t needed anymore.

But the Scottish international says the switch to Championship rivals Sheffield Wednesday will put the smile back on his face.

Paterson has left for the Owls in a reputed £500,000 deal which has divided opinion among the Bluebirds faithful.

And reports in Scotland say that former club Hearts will get around £75,000 of that in a sell-on fee.

Paterson is said to have insisted on having the clause – understood to be 15 per cent – inserted in the deal which took him from Tynecastle Park to City in 2017.

One of the worst bits of business we’ve ever done. Scottish international, always done a job for us in a number of positions and exactly the type of character you want in the squad. To let him go for 500k is absolutely ridiculous https://t.co/tsbtuxoRwr

Within hours of joining up with his new team-mates,  Paterson – who has struggled for playing time under Neil Harris – spoke out about the move.

“Absolutely gutted my time at Cardiff City FC is over,” the Scot wrote on Instagram. “Very disappointed that I wasn’t needed any more and now it’s time to move on.

“Massive thank you to the fans who welcomed me into the club from day one. You guys made it special for me.

“Also big shout to the team, the best guys I’ve ever been around and I am very grateful for everything we achieved together, I wish all of you guys the best.

“I’ve made the best memories and some friends for life and wish everyone all the best. Thank you.”

“Can’t wait to get started with this massive club and to show everyone what I can do.

“So grateful for the opportunity to be here and hopefully I can repay everyone with some goals and help get the club moving in the right direction!

“Looking forward to playing with a smile on my face again!”