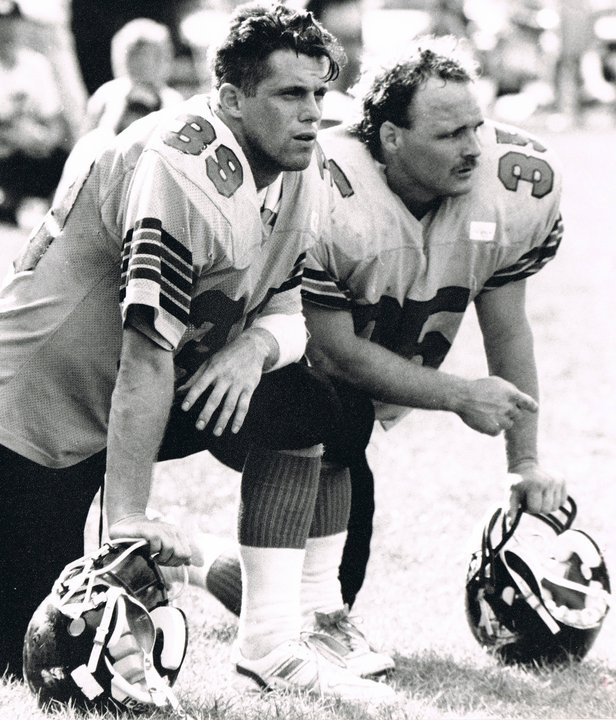 Gary Layton, right, takes a knee while playing for the Cardiff Mets

Gridiron’s CFL is holding a recruitment event to find British players who could cut it as professionals in Canada,  Twm Owen looks back 30 years when the Cardiff Mets turned to the north for American Football talent

This weekend 19 British American Footballers will fight for the chance to earn a professional contract in Canada’s gridiron league, the CFL.

The scouting event, or combine, in Bristol is one of a series being held across Europe during January, before moving on to Japan and Mexico, as part of the Canadian Football League’s bid to unearth new talent outside of north America.

But 31 years ago this summer American Football players were heading across the Atlantic, from west to east, including the first two of several Canadians bound for Cardiff over the next three years. Among them was Gary Layton, a college football player, who was overlooked by the dominant CFL team of the late 70s and 1980s, the Edmonton Eskimos, when he was signed to attend their training camp.

A few short years after that disappointment the possibility of playing for pay again was raised as teams in the UK, formed with the advent of television coverage of the NFL in the 1980s, sought players raised on the gridiron.

The Cardiff Tigers had recruited Steve Pisarkiewicz, a 1970s college football star quarterback by then in his 30s, who 10 years previously had been selected in the first round of the NFL draft by the St Louis Cardinals when they had their pick of America’s finest emerging talent.

The #CFLGlobalCombine tour gets started tomorrow.

The Cardiff Mets had been formed by a breakaway group in 1986 and midway through the 1989 season, having already lost their first ever encounter with the Tigers, a sponsorship deal with the government agency charged with redeveloping the city’s docklands allowed the Mets to bring over their own north American imports.

But the Mets, who had hosted a touring amateur side from Vancouver a year earlier at Cardiff Arms Park, rather than look to the US drew on their links with its northern neighbour where players also grow up on the gridiron but playing a version of the game with 12 rather than 11 players on a wider and longer field.

“With the Canadian injection the Mets could pull off their first win of the season and provide a welcome boost for their morale,” speculated the South Wales Echo on June 7, 1989. In fact the Mets would have to wait a further two games before Layton and his countryman, Floyd Mingo, would inspire a first victory of the summer.

“It was an eye opener on commitment and the disparity of talent levels. There were some talented and hard-working, committed players and some not so committed,” 55-year-old Layton recalled this week, via email, from his home in Calgary, Alberta, of his first taste of playing in the fledgling British league.

That first victory, at the more basic surrounds of the Cardiff High School Old Boys Diamond Ground in the city’s Whitchurch suburb, where the Mets had relocated for ‘89 from the Arms Park, would come against the Swansea Dragons in a 32-16 thriller.

“An inspirational fourth quarter performance by Canadian quarterback Floyd Mingo saw the Mets pick up their first victory of the season over the Swansea Dragons,” reported the Echo at the end of June.

The evening newspaper’s reporter was clearly impressed by the talent on display: “Mingo found himself on fourth and sixth at the Dragons’ 37-yard line and bravely fired a brilliant pass which fellow Canadian Gary Layton caught near the Dragons’ line and as he was tackled the receiver stretched out to ground the ball over the line.”

Three years previously Mingo, a teammate of Layton’s at Vancouver’s Simon Fraser University, had been selected in the first round of the CFL draft, as a defensive back, by the city’s BC Lions. He played in the Canadian league for two years and was another whose sporting career would be revived by the emergence of gridiron in Europe and an ambitious Welsh club.

Layton remained with the Mets for a further two seasons, crowning his spell in Wales by leading his team to the Coca-Cola Division Two Bowl in 1991, his final game for the club which was a 50-28 loss to the Coventry Jets.

The 26-24 semi-final victory, at the Cardiff Civil Service Grounds, over the Stoke Spitfires ensured the Mets became the first Welsh team to reach a major British final and was featured on Welsh television evening news.

During his spell in the capital Layton was joined by a revolving cast of his countrymen every year, at one time living together in a shared house, while one season Layton and fellow Canadian Gary Johnston were “billeted” with team-mate Richie Lewis and his wife.

Though Mingo had perhaps the most successful career in the CFL he wouldn’t necessarily be described as the most talented by the man who succeeded him as the Mets QB.

“Tom Valasic was a highly touted player. We were a better team with Tom, not only as a player, but as a coach. And Gary Johnston was the most skilled and the best player I ever played with,” is Layton’s assessment of his former teammates.

Just two years after Layton left Cardiff to return to Canada, where he now works in the oil and gas industry as well as an actor, director and producer with his own film company, the Mets folded.

But his three years in Cardiff allowed Layton to see at first hand the growth of a new sport while he also met his wife.

“The Mets got better and the teams we played got better,” said Layton of the game’s development during that period.

“It came down to commitment.  The more, and harder, we practiced we got better. We began watching tape of other teams, and learning how to win.

“In my years it seemed the crowds were not large but very loud and enjoyed the games. From the first game to the last – it was night and day,  we were winning and getting good crowds.

“The experience was invaluable in my growth as a leader and businessman which set in place my future steps. Not to mention, I met my wife, Amanda Jones, in Cardiff,  was married 25 years and have three boys, who are half Welsh.”

Layton’s sons are due to return to Cardiff later this year and the man who first stepped on the gridiron in Wales, with the Vancouver Meralomas, at Cardiff Arms Park in 1988 is proud to say his oldest son turned 16 while watching the Cardiff Blues from the sideline and is now a rugby player.

The talent within the Mets squad impressed Layton and he believes if a similar initiative to the one currently being undertaken by the CFL to discover potential players was in place it could have seen some Welshmen being given opportunities in Canada.

“One player who had the training and commitment and skill was Gareth Kear, if he would have started younger, the potential was there. That’s not to say there wasn’t a couple of other players on the Mets team that could have as well,” said Layton, naming the Mets Linebacker, and father of Wales Rugby League captain Elliot, as a Welsh teammate that had the attributes required to play at a higher level.

British American Football’s governing body no longer allows teams to pay ‘import’ players but the CFL has suggested its global initiative could help Canadian players who fail to make the CFL grade further their football careers by playing abroad, a move Layton would recommend to his countrymen.

But he also regrets the UK tour he was a part of in 1988 hadn’t paved the way for an international development programme, something the then cash-strapped CFL couldn’t have afforded.

“The Merloma team that traveled in 1988 should of promoted more response. The CFL was not in good financial shape in the late 80s, early 90s. I’m embarrassed to say my contract in the CFL was not good, some players had side jobs,” said Layton who after returning to Canada continued to play flag football until he was 44, representing his country in tournaments, and earning a place in the Canadian Flag Football Hall of Fame in 2017.

Though Layton’s CFL dreams were never realised he was able to enjoy a sporting career that changed his life. The players attending the CFL combine this Saturday may be surprised at what opportunities it brings them.