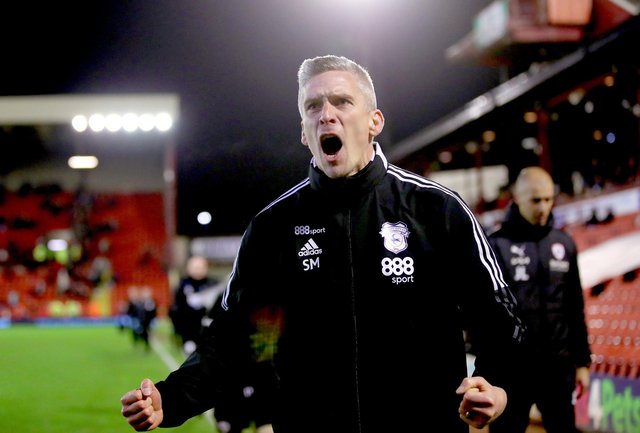 Steve Morison insists the tunnel bust-up between Cardiff City and Barnsley was just “handbags” but that is unlikely to prevent the FA from launching an investigation.

Coaches and players from both teams clashed at the end of Cardiff’s gritty 1-0 win at Oakwell, with Morison and Barnsley assistant manager Joseph Laumann at the centre of events.

Video footage appears to show Laumann pushing Morison aside as they head towards the tunnel after Uche Ikpeazu’s winner had given the Bluebirds a vital three points against their fellow Championship strugglers.

They tunnel area then becomes a focal point for players and stewards jostling as events further down the tunnel appear to impede their entry.

“It was handbags, really, at the end of the day,” said Morison.

“The security got involved and it all just boils over.

“The [Barnsley] assistant manager didn’t like the fact that they lost and didn’t handle it very well. It was fine, he just picked the wrong person.

Steve Morison about to enter the tunnel and gets a shove from Barnsley coach and it kicks off. https://t.co/jWH2sMNHBD

“It was an awful tackle [by Barnsley’s Mads Andersen on Cardiff’s Alfie Doughty]. That was why there was so much passion at the end because that was a real naughty tackle.

“They were hiding towels for long throws and being really nasty, and you know what happens when people are like that? They get their comeuppance and it’s karma.”

Both clubs could now face an FA investigation and a possible charge of failing to ensure their players conducted themselves in an orderly fashion.

For Barnsley and Laumann that would be a repeat appearance in the dock as he was fined £2,500 for his part in a post-match dispute with Stoke City back in October after receiving a red card from referee Leigh Doughty.

In their report into that incident, the FA concluded Laumann’s behaviour “was aggressive and violent from the moment that he confronted Dean Holden. He slapped Holden and later had his arm around someone else’s throat. Therefore, we must take a higher starting point in his case.”

But Barnsley manager Poya Asbagh has accused Cardiff’s management team of provoking the home side through their reaction at the final whistle.

“I knew when I came to England that you have to be ready for the verbal communication from opponents which is different to what I am used to,” said Asbagh.

An on-field melee spilled into the tunnel after the full-time whistle was blown in Cardiff’s 1-0 win against Barnsley…👊💥 pic.twitter.com/rynfAlrWmm

“They argue and complain and scream. I like that, I find it charming and fun. It puts intensity into the game. But it has to stop after the final whistle.

“If you are the coach of Cardiff and you just won a game like that, you should come and say thank you.

“We went to him to say congratulations and he said really bad things. Then my assistant coach reacts to what he said which is wrong.

“Congratulations to Cardiff but they didn’t win with style today. Please show a bit of sportsmanship, the way they behaved was ridiculous.”

Ikpeazu secured the victory for Cardiff just eight minutes into his debut after joining from Middlesbrough on transfer deadline day.

The 26-year-old striker has only mustered three goals in 22 outings for parent club Boro this term, but he became an instant hit with Bluebirds fans when he tucked away a 71st-minute chance in a game of few clear-cut opportunities.

Morning #Bluebirds i woke up and it wasn’t a dream!😳🤯
Debut goal and most importantly another 3 points! The best is yet to come. We keep building @CardiffCityFC.🏴󠁧󠁢󠁷󠁬󠁳󠁿💙🙌🏿 #CityAsOne pic.twitter.com/Vut88RKVkD

The 6ft 3in striker used all of his brawn to brush off the attentions of Barnsley skipper Mads Andersen and latch on to a long ball forward, before scuffing a 10-yard shot into an onrushing Brad Collins’ bottom-right corner.

At the other end of the pitch, meanwhile, Cardiff ended a woeful run of 27 games in all competitions without a clean sheet.

Morison added: “The game wasn’t a great spectacle – it was a horrible game and wasn’t our finest performance, but he [Ikpeazu] had that one moment and he got to show how strong and powerful he is.

“He is hard to stop when he gets going and is a great kid who has come into the club with a smile on his face.

“He’s brought a nice energy to the squad and the lads have told him he’s got to go to the gym because he’s not strong enough.”