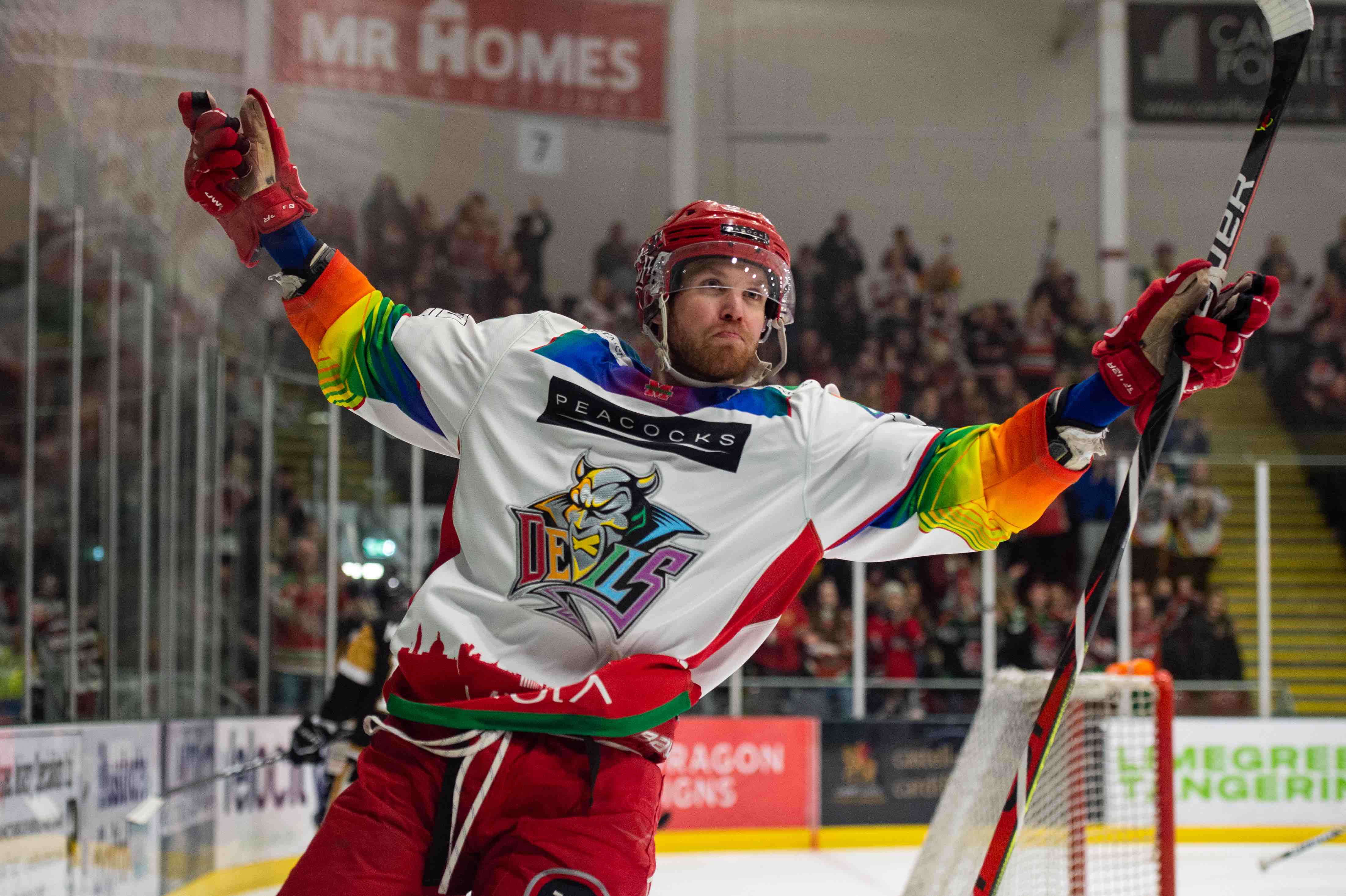 Cardiff Devils are the Pride of Wales – and their relentless chase for iced hockey trophies goes on.

They marked Elite League Pride weekend with special game shirts plus back-to-back victories and club managing director Todd Kelman said: “Devils are proud to support this initiative for the third year in a row.

“Our aim is to ensure everyone knows Devils games are safe and fun. There is a friendly atmosphere for everybody at every fixture.

“We have partnered with Pride Cymru, the folks who have been doing this for much longer than we have.

“What an incredible job they do.”

Devils Pride ambassadors Evan Mosey and Sam Duggan both signed autographs after the win against Panthers at the Viola Arena in Cardiff Bay  on Sunday.

Captain Joey Martin and his Devils defeated Fife Flyers 5-2 away and then condemned Nottingham Panthers to their second defeat in two days after a 5-2 home defeat against Guildford Flames.

Cardiff are running four balanced forward lines and head coach Andrew Lord said: “All four look solid and know each other well. They each have their own identity.

“We are playing the right way and producing.

“Our start was a bit slow and tentative, but we defended well; and didn’t give up much.”

Devils now head to Nottingham for the Challenge Cup semi-final second leg on Wednesday and Lord says: “We have to be better in the cup match than we were on Sunday. It will take a full 60-minute performance to give ourselves the chance to go forward.

“Panthers are an extremely good team who play hard no matter what the score. Our start is critical. There will be ups and downs – it will be a battle.”

Nottingham host Cardiff with the sides locked at 5-5 after the first leg, meaning it’s a straight shootout on the night for a place in the final at the Viola Arena on March 8.

In the other semi-final, Sheffield have a 5-1 lead over Glasgow heading back to the Fly DSA Arena on Wednesday.

“The second leg is a huge game for us,” said Panthers coach Tim Wallace. “This weekend has been a blip for us, but we must stay confident. If we play like we can there is the chance of going to the final.”

“We have a great team, a great group of guys. It’s important to shake this weekend off and go again in the cup.”

Two goals by Joey Haddad and 37 saves from goaltender Ben Bowns led Devils to their home victory against Panthers on Sunday.

Devils opened the scoring at 13-34 when Mike McNamee took a pass from Sean Bentivoglio before going high glove on goalie Kevin Carr.

Panthers tied the game up on a powerplay at 16-57 through Jonathan Rheault, while Devils regained the lead 26 seconds into the middle when Blair Riley scored after being set up by line-mates Joey Martin and Masi Marjamaki.

At 25-38 Devils extended their lead with a powerplay goal by Haddad after a perfect cross-ice pass from Martin and less than a minute later Haddad scored his second.

Charles Linglet set up Haddad for his League leading 25th goal of the season.

Jullian Talbot hit the bar for the visitors before Panthers clawed one back on the powerplay through Sam Herr after 36-14 and that completed the scoring with no goals in the final 20 minutes.

Nottingham pulled Carr in favour of an extra attacker with two minutes to go and, but could create clear-cut chances and Cardiff skated out with two Elite League points.