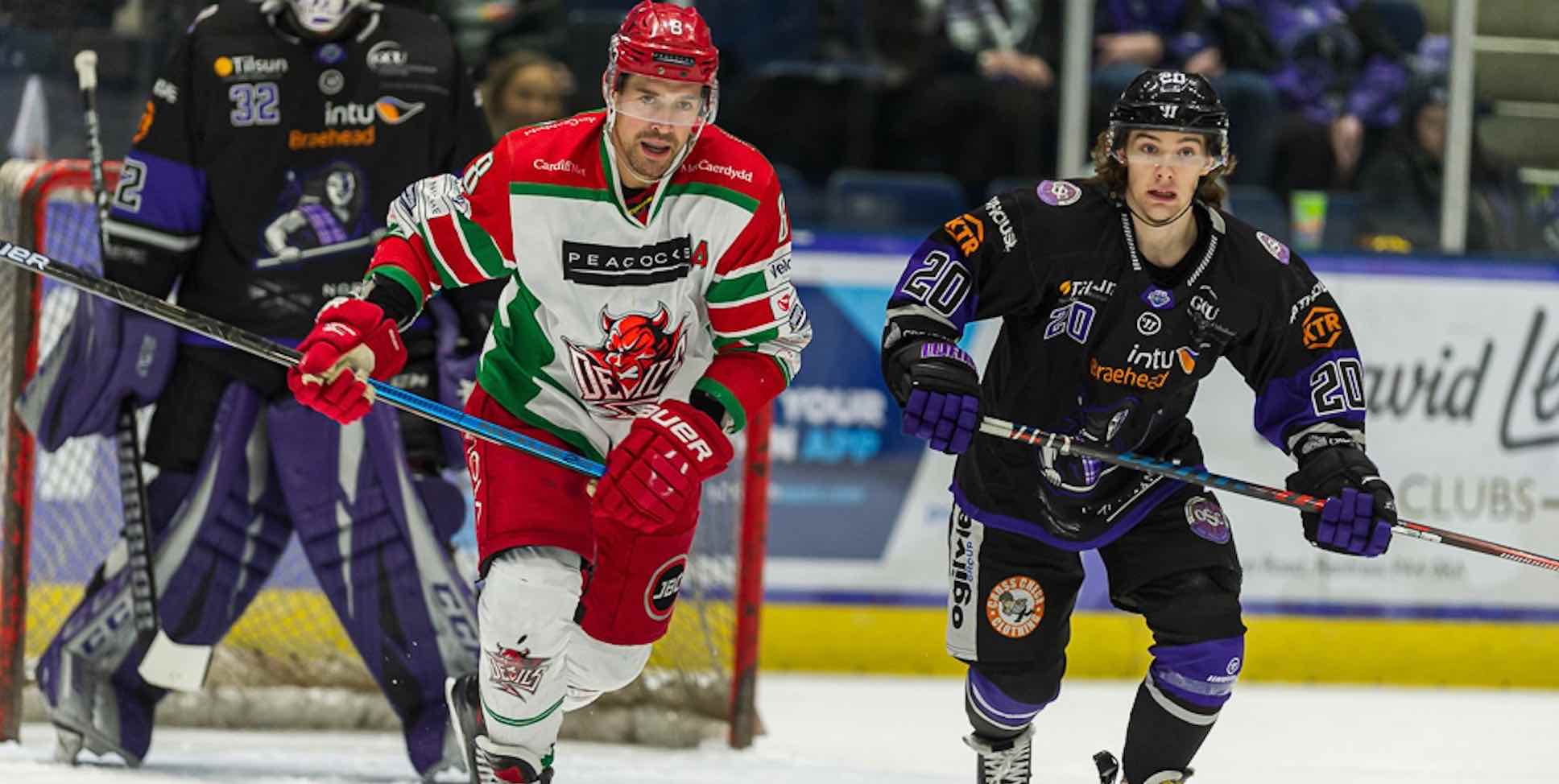 This was a second successive win for Clan against Devils, who conceded six goals in each match.

Head coach Andrew Lord believes his Cardiff team will have to be better than they have ever been to regain the EIHL title.

Lord has added defenceman Shaone Morrisonn, who played more than 500 NHL appearances, to the team and he skated with Evan Mosey and Toms Rutkis at the Viola Arena in Cardiff today as the Devils team travelled back from Scotland.

Morrisonn will be playing against Manchester Storm away on Saturday and at home to Fife Flyers the following evening.

“It was a great game,” said Lord after Devils’ 6-3 defeat in Glasgow. “Every night is tough. I liked our start we scored the first goal.

“Our first shift in the second period wasn’t good enough and we gave up an easy goal. We had to fight and claw, which we did, and fought our way back before running into penalty trouble.

“The first shift of the second and special teams let us down unfortunately. Coming into the hame we were the leading powerplay team and up there on penalty kills. Both failed us in Glasgow.

“I’m not sure our guys to a man have understood just how good this league is now. Hoping this will be final nail in coffin to ensure they all understand how good it is.

“It’s a 10-team league – anybody can beat anybody. To get anything done this season we are going to have to be better than we’ve ever been.”

Devils took the lead in the opening minutes (2-34) when Mike McNamee swept in a rebound after net minder Patrick Killeen had stopped Matt Pope’s initial effort.

Glasgow drew level in the final couple of minutes of the first when Nolan LaPorte forced in from close range after a scramble.

Devils were sloppy at the start of the second and Rasmus Bjerrum scored. The Dane then turned provider for Glasgow’s third when Craig Peacock barged into the face-off circle, played a neat one-two with Bjerrum before scoring.

Lord’s team responded almost immediately when Gleason Fournier teed up Blair Riley in front of goal and he made no mistake.

Pope rifled in a deadly shot with nine minutes left to make it 3-3 and set up a tense final few minutes in what had been an entertaining and thrilling encounter.

Cardiff threw themselves forward and Matt Pufahl made it 5-3 with an empty-net goal and then Travis Erhardt repeated the feat.

Devils are on the road this Saturday when they play Manchester Storm in Altrincham before returning to Viola Arena the next day for their home clash with Fife Flyers.

Welcome back to Cardiff 😈 pic.twitter.com/CQOrQlzUh5

Tickets for Sunday’s game are available ONLINE HERE or by calling Devils hotline on 0800 0842 666.

Former Devil Brent Walton will back in Cardiff on Sunday and will meet fans in the bar before face-off when he will talk about his time in Cardiff and life after ice hockey.