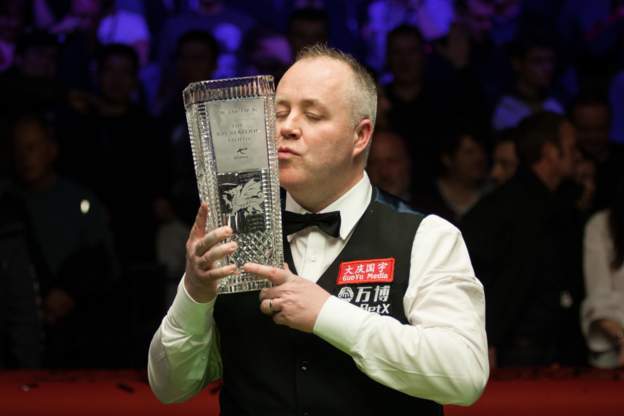 Hirani, 28, kept his composure, played some excellent safety shots and impressed with quality long potting to level the score at 3-3.

The experienced Williams held his nerve to come through a difficult test and take his place in the second round.

“It was a tough game, he made a couple of good breaks and his safety had me in trouble,” said Williams.

“People were saying it was a foregone conclusion and I was going to win 4-0 or 4-1, but I knew that was a lot of rubbish. I knew it was going to be a difficult game and I could have lost.

“It would be good for the tournament if any Welshman had a run. It’s unbelievable how none of us have done any good in recent years. It could be because the home pressure gets to us.”

“The pair of us struggled to control the balls when we were in,” said Day. “This was my annual day out in Cardiff for the Welsh Open.”

Higgins is low on confidence and said: “I could have been back up the road after the first round. I’m not feeling great.

“To win 4-0 against a player of Graeme’s quality is great. I grew up with him, he’s a high quality player who doesn’t get recognition he deserves.

“My mental state is not great. It’s the worst I have felt as a pro, not wanting to play or practice. But I am working on that.

“I want to rekindle my love for snooker.”

Higgins earned the victory he needed to lift confidence, making breaks of 86, 65 and 51.

“Coming back to Cardiff I was trying to think of some good memories I’ve had here,” said Higgins, who has won the Welsh title a record five times.

He played Harvey Chandler in the Welsh Open first round with top breaks of 85 and 84.

“It was nice to get through so I can have a bit of time off before my next game,” said Trump.

“There aren’t many players who win back to back events so I have to be realistic. It is draining mentally to be playing week in, week out, so I’m just going to try to enjoy this event and relax.

“It’s a good time to be playing snooker because there is a tournament every week. There are players who have won five ranking events in a season and that’s a goal I want to achieve within the next few years.

“My mentality at the moment is that I don’t want to drop a frame, so I’m trying my best to win every frame I play. I always enjoy coming to Cardiff because the fans here love their snooker and I always get fantastic support.”

Lukas Kleckers from Germany won 4-0 against Ebdon, top scoring with a break of 52, while Switzerland’s Alexander Ursenbacher defeated Yan Bingtao 4-2.

There are eight tables in use at the Motorpoint Arena one the first couple of days, catering for 128 players in the draw.

First round matches continue on Tuesday and those involving top 10 seeds are:

Ding Junhui vs Chris Totten 11am